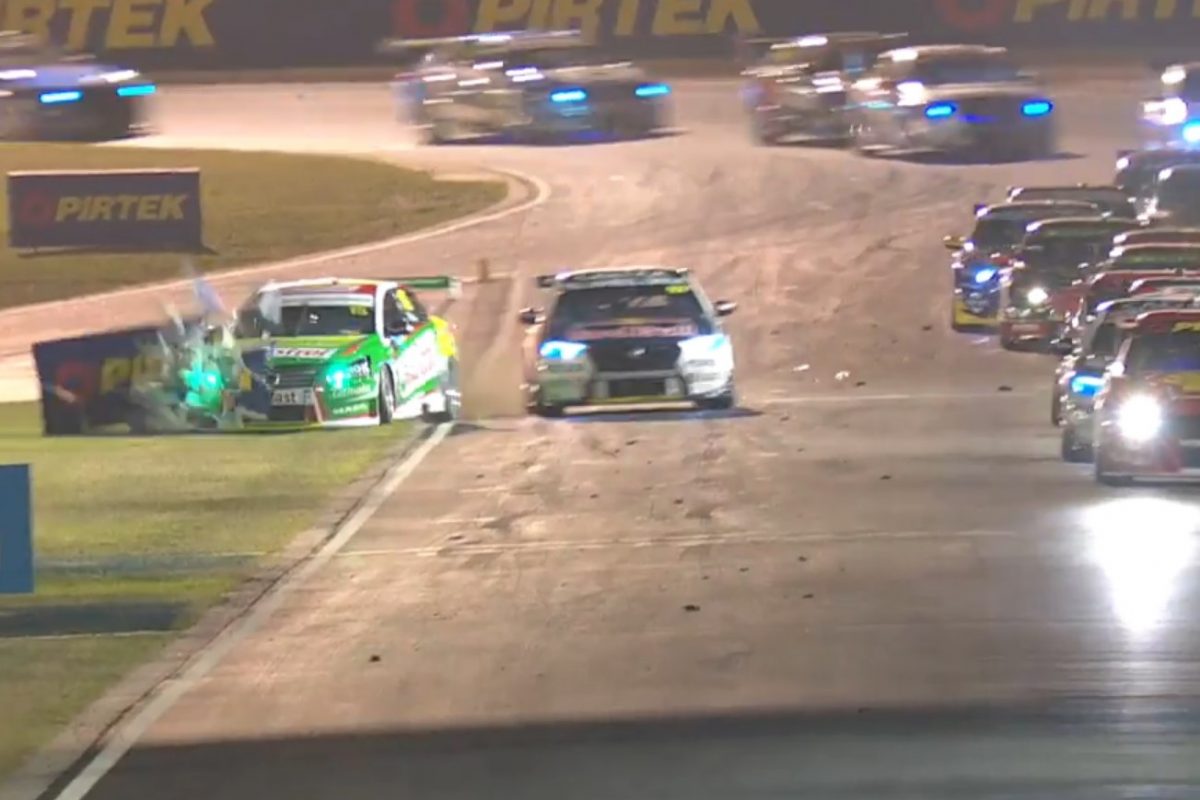 Rick Kelly has accepted blame for the restart incident with Shane van Gisbergen which saw his Castrol Altima turned onto the grass on the main straight.

Kelly sat fifth under Safety Car and van Gisbergen sixth after the latter lost a handful of seconds stacking behind the other Red Bull Holden Racing Team entry of Jamie Whincup midway through Race 12 at the Pirtek Perth SuperNight.

However, the New Zealander managed to make an overlap with the Kelly Racing owner-driver as they accelerated along the main straight when the field was let loose again on Lap 55 at Barbagallo Wanneroo Raceway.

Car #15 went across the nose of Car #97 but Kelly managed to stay off the pit wall, and indeed facing in approximately the right direction.

He lost more time still when he got his ears boxed in the angry pack and had to pit to remove the pieces of the polystyrene sign which his air dam collected in the initial incident.

Officialdom opted to take no action over the incident and, despite coming off the worse of the pair, Kelly claimed responsibility.

“We had to do a pretty nifty strategy to get us back in the mix and have a good race car and the guys delivered both those things,” said the Altima driver.

“I’m pretty gutted for them that it ended the way it did.

“It was obviously one of those sketchy little restarts where you come around the last corner, not at race pace, and you can overlap obviously which is the rule after the last corner but not pass before the start-finish line.

“I started to cover myself, unfortunately Shane had more momentum and a little bit of overlap and the rule is you can run him to the edge and not further and he obviously had more overlap than I was expecting and turned me on to the grass.

“I put my hand up for that one and say it was my fault because he had overlap, that’s why I ended up on the grass. Just really bummed for the team that did a great job.”

Van Gisbergen offered a similar assessment of the moment, explaining that he gave as much room to Kelly as he needed to before coming up against the edge of the race track.

“Green flags came out as we turned into the last corner and overlapped on the exit, and he ran me to the white line so I moved with him and then I stopped at the white line and he spun himself out,” the Triple Eight driver recounted.

“You wouldn’t want to give up fifth place, and (I) caught him napping there, and you never want to do that but I had the right of way and he tried to push the limit, and I guess to push himself ahead as you can do, but I was too far alongside.”

Van Gisbergen continued in fifth for the remaining 29 laps while Kelly was home in 20th.

The coming-together rubbed salt into the wounds for Kelly Racing given that the Safety Car came due to Walkinshaw Andretti United’s Scott Pye turning Andre Heimgartner’s Altima around when he made heavy contact at Turn 7.

The Deputy Race Director deemed there to be no driver wholly or predominately to blame in that incident, and made the same call regarding incidents between David Reynolds and Tim Slade at Turn 7 on Lap 4, and between Mark Winterbottom and James Golding at Turn 7 on Lap 48.

They did, however, add five seconds to Brad Jones Racing wildcard Tim Blanchard’s race time for a driving infringement on Kelly Racing’s Garry Jacobson at Turn 7 on Lap 74, which did not actually change Blanchard’s classified position of 18th.

The stewards summary also clarifies the circumstances surrounding the penalty issued to WAU the night before for a line-locker related breach in Race 11, namely a problem with James Courtney’s car’s mechanism.

“Clarification of the penalty applied to WAU Racing Pty Ltd – Car #22’s brake lock mechanism did not engage for the entire time Car #22’s wheels were off the ground during its first Pit Stop,” it stated.

Earlier, Cameron Waters lost his fastest lap in Practice 3 for impeding Heimgartner at Turn 7, which had the effect of the Tickford driver handing his top 10 spot to the Altima pilot, although both ultimately earned top 10 starting berths in knockout Armor All Qualifying.