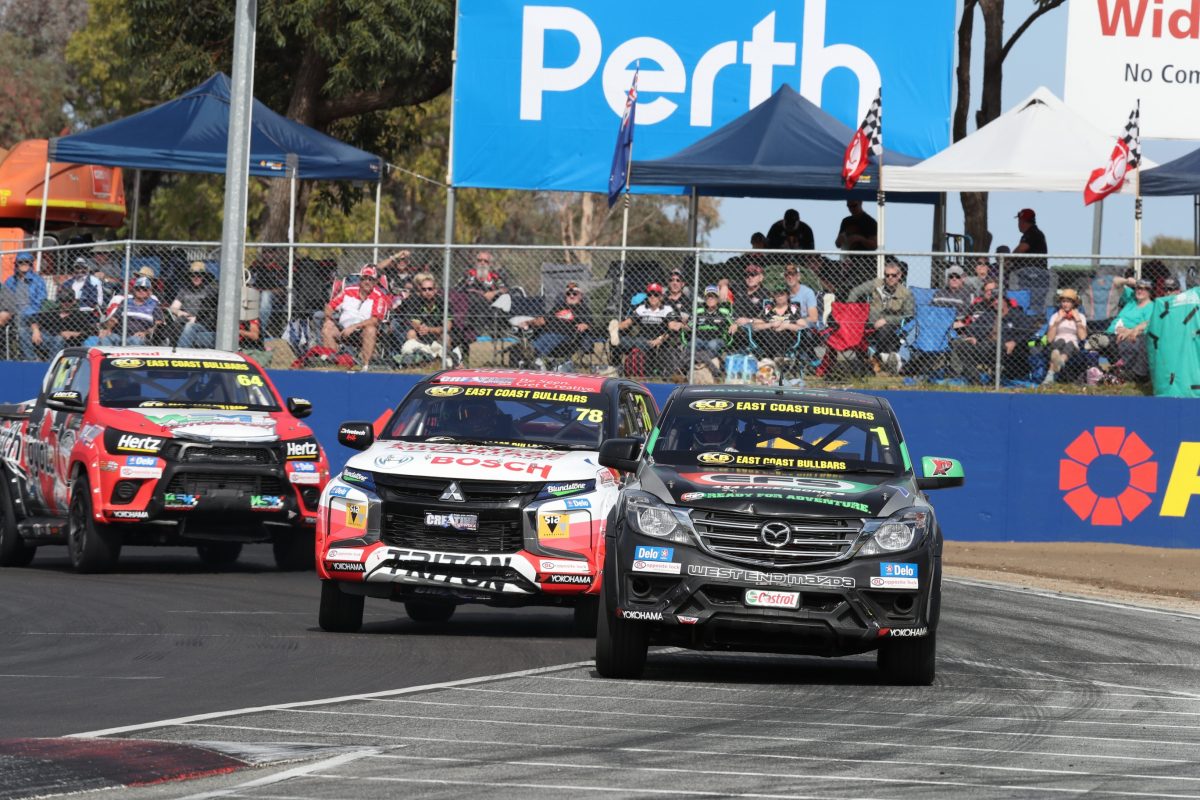 Ryal Harris and Elliot Barbour battle at the front

Ryal Harris has won Race 2 of Round 2 of the ECB SuperUtes Series at Barbagallo after a titanic contest for the lead.

The 2018 series winner held out Elliot Barbour (#78 Sieders Racing Team Mitsubishi Triton) at the end of 20 laps to take the #1 Peters Motorsport Mazda BT-50 to victory in the reverse grid affair.

Craig Woods started seventh but was attacking Harris for the lead at the halfway mark, only to fall back to fifth and then rebound to third in the #64 Western Sydney Motorsport Toyota Hilux.

Cameron Crick (#7 SRT Triton) and Christopher Formosa (#49 Allgate Motorsport Ford Ranger) rounded out the top five having also been involved in the fight at the front of the 10-car field.

Ben Falk (#17 Peters BT-50) and Mick Sieders (#10 SRT Hilux) started from the front row, after a light shower, but when Falk moved to driver’s left and forced Sieders wide, he opened the door for Harris to march through the gap at the first corner.

In the scrap which followed as they climbed the hill for the first time, Barbour made his way to second and Ben Walsh took up third after a wild run across the infield through Turn 5.

Pete Major passed Woods down the back straight on Lap 2 only for Woods to reclaim fifth position when they next got to Turn 1, and Crick followed him through.

Walsh had been battling with Race 1 winner Tom Alexander for third position when his #8 Toyota Hilux slowed on Lap 3 and he started falling down the order.

Alexander would soon experience problems with his #22 Ross Stone Racing Isuzu D-Max as well and he was picked off by both Woods and Crick a lap later, while at the head of the field Barbour was pressuring Harris.

Barbour made one failed move at Turn 7 on Lap 4 but covered the line into Turn 1 when he dived at the same spot a lap later.

With the top two costing each other time, Woods and Crick caught up and what followed was arguably the most entertaining race in SuperUtes’ short history, with the top three regularly changing, particularly at the hard stop at Turn 7, and all often sideways.

It became a five-car battle when Woods ended up sliding wide at Turn 1 on Lap 15, letting both Crick and Formosa through.

From there, it was largely a two-car battle again between Harris and Barbour at the very front of the pack, in which the former prevailed by less than half a second at the chequered flag.

Woods re-passed Formosa at the bottom of the back straight on Lap 18 and would also get Crick before the end.

Mick Sieders finished sixth having plunged down the field on Lap 1, ahead of Walsh and the ailing Alexander, who had an off at Kolb Corner and would drop a lap.

Falk and Major (#18 Team 18 Holden Colorado) were both DNFs.

Next Story Tom Alexander prevails in SuperUtes Race 3 in Perth