Coulthard: ‘No better way to respond’ than all-Mustang podium

Coulthard: ‘No better way to respond’ than all-Mustang podium 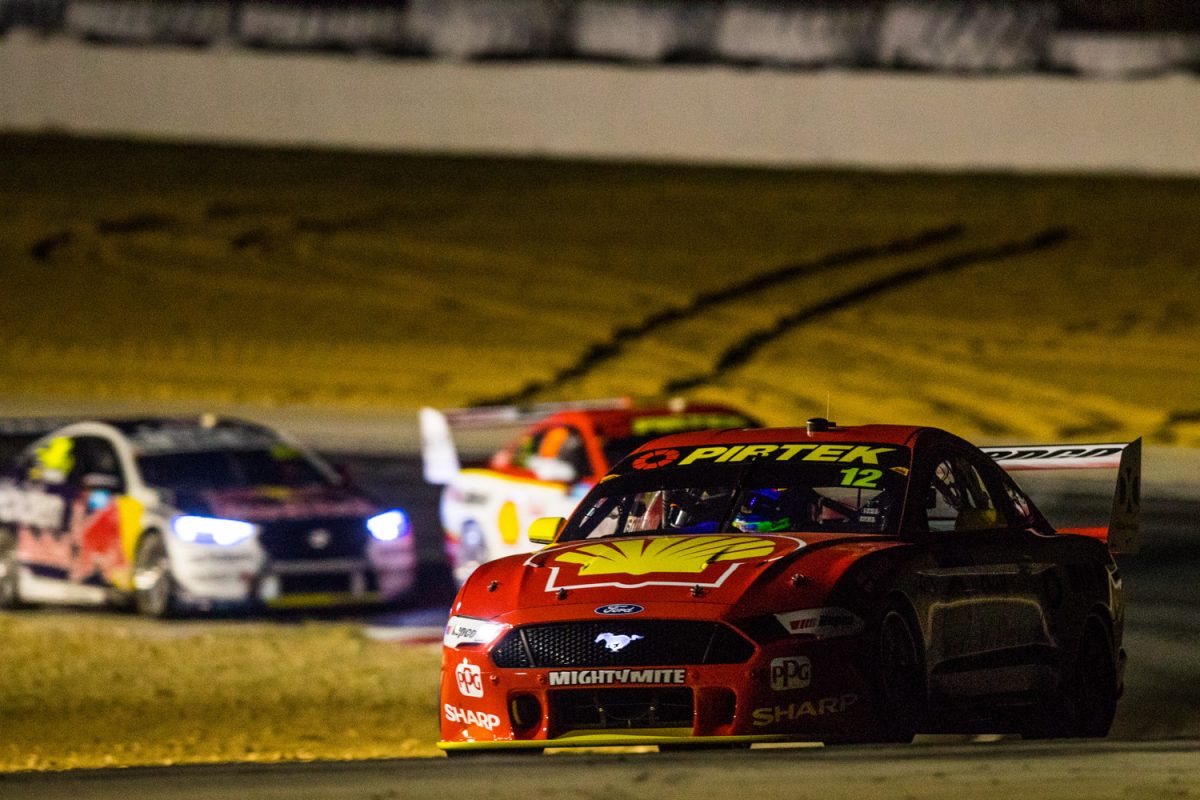 Fabian Coulthard believes that there was ‘no better way to respond’ to recent parity changes than by Mustang drivers sweeping the podium in Race 11 at the Pirtek Perth SuperNight.

Coulthard effectively led all 50 laps of the first race since Ford teams had to make aerodynamic adjustments to their cars designed to address a disparity which Supercars found between the Mustang, ZB Commodore, and Altima.

He was joined on the podium by Shell V-Power Racing team-mate Scott McLaughlin, who topped the day’s Armor All Qualifying session but made a poor start to the race, and Chaz Mostert in Tickford Racing’s Supercheap Auto Mustang.

While all three maintained that they could not discern a difference between the performance of their cars at the preceding event at Phillip Island compared to this weekend at Barbagallo, both Coulthard and McLaughlin described the result as a ‘relief’.

Coulthard also alluded to the significance of the performance in light of the presence of senior staff from Team Penske, Ford Australia, and Ford Performance at Barbagallo Wanneroo Raceway.

“The cars are good and it was awesome to have Roger (Penske) here, it always is, and Bud (Denker, Penske Corporation President) and all the other guys. They get to see everything firsthand.

“It was good, there’s no better way to respond than the way we did with having three Mustangs on the podium.”

The sentiments were echoed by McLaughlin after admitting that he was unsure just how the aerodynamic changes would affect performance.

“It’s bloody good, it’s relieving, because obviously you come here and you don’t know what you’ve got and whether you’re going to be fast or whatever,” said McLaughlin.

“I think the car was really good, we’ve been right there all the time, and I can’t tell the differences between the two settings.

“I think we’ve got a really good team environment, atmosphere going at the moment where we just feel like we can do a lot of good things, so it’s a rally cool atmosphere at the moment and I think that’s half the reason why we’re so fast.”

Shell V-Power Racing boss Ryan Story declared the one-two a fantastic result for the team in the circumstances and one that has a tad of redemption attached to it after losing to Triple Eight in last year’s SuperNight at Sydney Motorsport Park.

“It’s a fantastic result for the team. Anytime you achieve a one-two finish, it means you’ve got everything right,” Story told Speedcafe.com.

“It’s great to get a little bit of redemption for the night race, too; we’re still hurting, I think, from last year’s night race at Sydney Motorsport Park getting away from us so it was great to score a win here tonight.

“I think it just goes to show when you have Kay Hart, the President and CEO of Ford Australia New Zealand here, and Mark Rushbrook, who’s Motorsports Director for Ford Performance, and it shows how invested that Ford are in the sport and how important Supercars is to them, and I think it’s a great testament to where we’re headed and what we’re doing.

“Of course (it means a lot following the parity changes), and we have to do it all again tomorrow (Saturday), so we’ll try and turn around and see if we can have a repeat performance.”