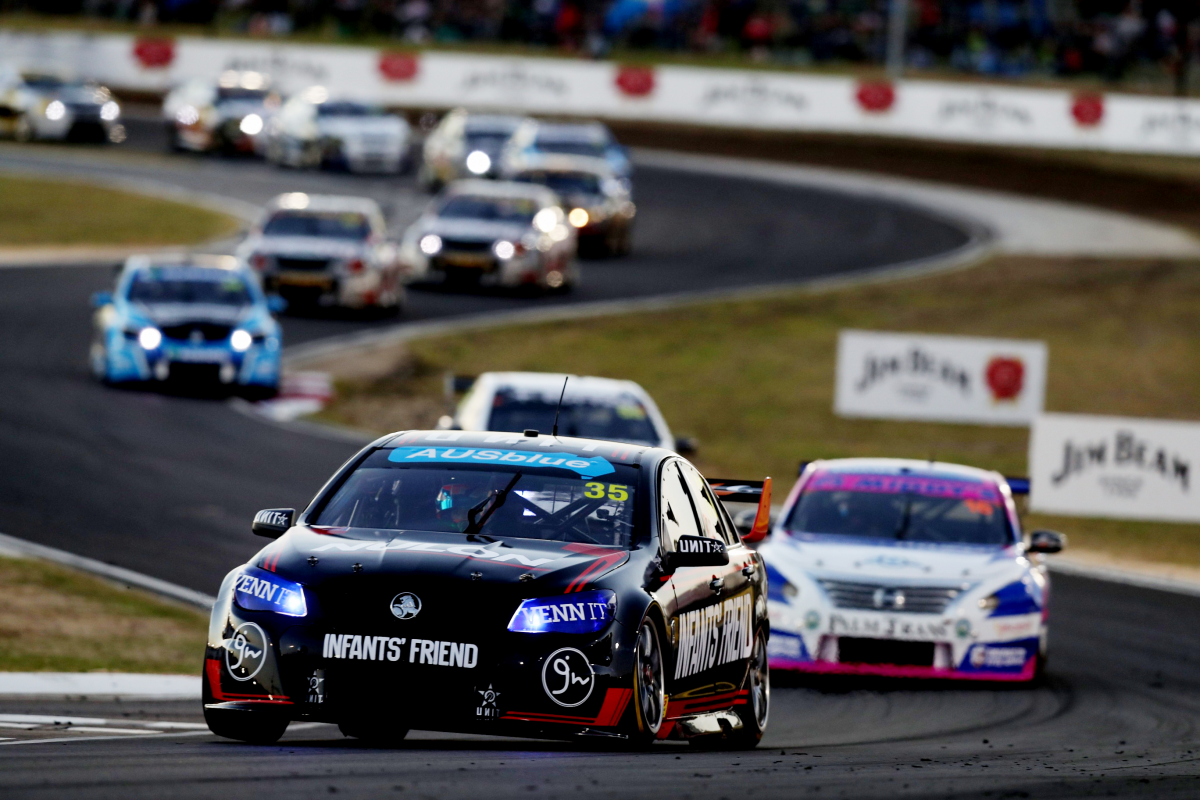 Ash Walsh has claimed his first race win since returning to the Dunlop Super2 Series in Race 2 of Round 2 at the Pirtek Perth SuperNight event.

Walsh (#35 VF Commodore) headed the field from the outside of the front row and stayed in front for all 26 laps, taking his first victory in Super2 since 2014 and Matt Stone Racing’s first since Newcastle in 2017.

Armor All Pole Position man Zane Goddard had a far more eventful race in the twilight, however, breaking into wheelspin when the lights went out as Walsh drove into first position.

The second row starters arrived at the first corner alongside each other but Fullwood had the inside line and put Kurt Kostecki behind him, with Fiore gaining two positions relative to his grid berth to take up fourth.

It almost got far worse when the #28 Altima was kept high through Turn 2/Turn 3 as Adam Marjoram (#15 Image Racing VF Commodore) attempted to buy in, with Goddard only losing one more position, to Jake Kostecki (#56 Kostecki Brothers Racing VF Commodore), as he touched the dirt.

Thomas Randle (#5 Tickford FGX Falcon) qualified 11th but was pressuring Will Brown (#38 Eggleston VF Commodore) for eighth when the Race 1 winner pinched a brake into Turn 4 and ran wide, handing the spot over.

Randle claimed seventh a short time later as Goddard, who had just survived another slide on the dirt when he got stuck outside of Jake Kostecki at Turn 5, locked the rears and opened the door at Turn 1.

Walsh and Fullwood had been circulating around half a second apart for several laps when the Safety Car was called on Lap 15 in order to recover Matt Chahda (#18 Matt Chahda Motorsport FGX Falcon) from the sand at Kolb Corner after he received a touch from Joel Heinrich (#47 Matt Stone Racing FGX Falcon).

The restart came on Lap 18, at which time Jake Kostecki ran wide at Turn 1 but held sixth position and stayed there until the end, one spot behind Brodie Kostecki.

Fullwood kept himself about half a second behind Walsh in the post-Safety Car segment of the race but never seriously challenged for the lead.

Randle remained seventh, while Brown passed Goddard off Kolb Corner on Lap 19 as they went on to finish eighth and ninth respectively.

Marjoram rounded out the top 10 on home soil, one spot ahead of team-mate Jordan Boys (#49 VF Commodore), with Tyler Everingham (#27 MWM Altima) top rookie in 12th.

Chahda did finish at a two-lap deficit to the winner, while the incident between he and Heinrich is under investigation.

Walsh, who returned to MSR and Super2 this year, won the round from Fullwood and Brown, the latter of whom revealed that he had in fact been baulked in the day’s earlier qualifying session when he could manage only ninth.

Fullwood’s series lead is 64 points over Goddard heading into the long break prior to Round 3 at the Watpac Townsville 400 on July 5-7.