Coulthard gets jump on McLaughlin to win Race 11 in Perth

Coulthard gets jump on McLaughlin to win Race 11 in Perth 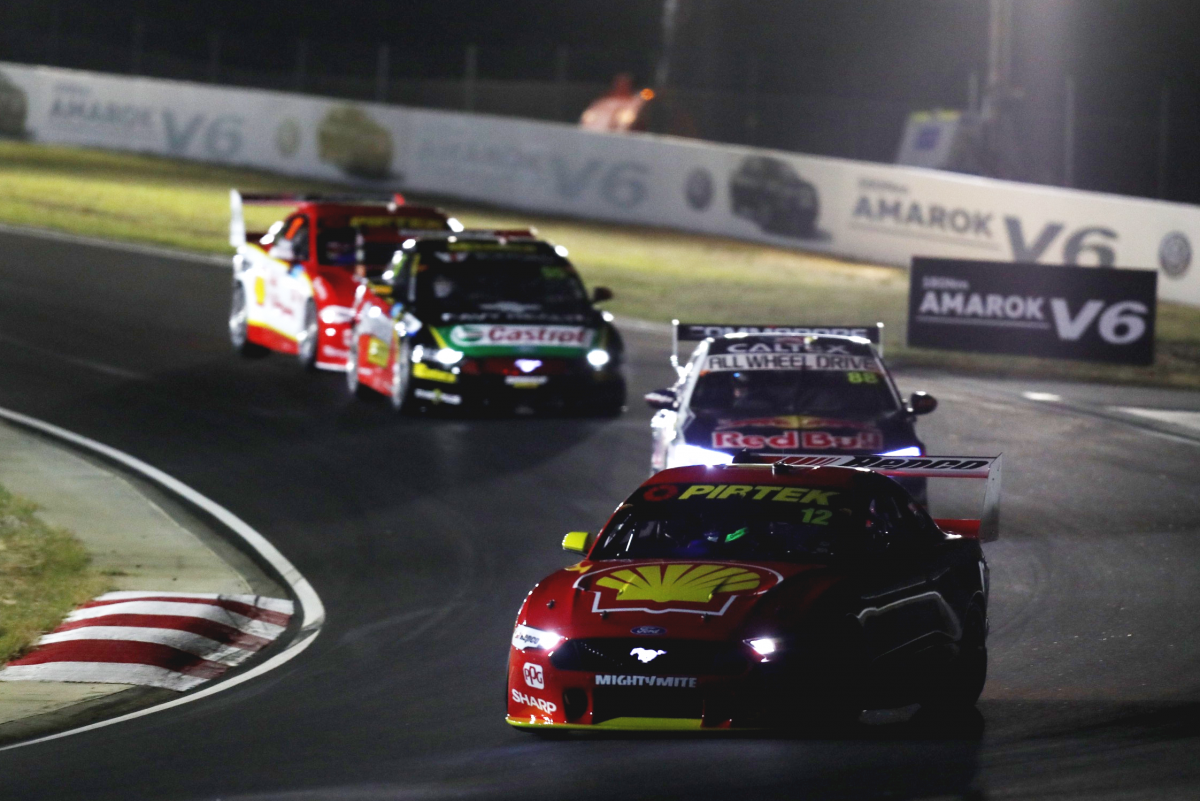 McLaughlin’s tardy getaway from Armor All Pole Position was pivotal in the final outcome, briefly putting the championship leader as far back as fourth before he regained some ground on the road and then through the compulsory pit stop cycle.

Supercheap Auto Racing’s Chaz Mostert made it an all-Ford Mustang podium after a strong move past Jamie Whincup on Lap 43 of the 50-lap affair.

Whincup was battling for rear tyre grip by that stage but was allowed to race his faster Triple Eight team-mate Shane van Gisbergen, having initially been told to let the #97 ZB Commodore past, and held the Kiwi off for fourth in the end.

McLaughlin was a slow starter from the inside of the front row All Pole Position and it was Coulthard who therefore assumed the lead from the outside of the Barbagallo Wanneroo Raceway main straight.

Whincup took up second position but only after shaking off Mostert, who made a bold lunge on the outside of the first corner in the #55 Tickford entry, while McLaughlin slotted into fourth.

Despite the setback, McLaughlin clearly had pace and passed Mostert at Turn 7 on Lap 3 before setting after Whincup.

The seven-time champion was a tougher task for the current champion, who tailed the #88 Red Bull HRT ZB Commodore for several laps before he was called into pit lane for his compulsory stop at the end of Lap 15.

Cameron Waters (#6 Monster Energy Mustang) had been running an effective sixth but appeared likely to soon come under pressure from van Gisbergen when he pitted at the end of Lap 17.

Whincup waited another lap, at which time Coulthard was about 2.5s up, and was joined in the pits by the following cars of Mostert and Nick Percat.

Car #88 emerged almost a second behind McLaughlin’s #17 Mustang, a margin which expanded as Whincup’s tyres came up to temperature, as Coulthard continued to circulate in the race lead.

Coulthard took service at the end of Lap 19 and, in part due to taking four tyres compared to McLaughlin’s two, it might have been a close-run thing between the DJR Team Penske cars but for #17 being held up by Richie Stanaway (#33 Boost Mobile ZB Commodore).

The effective leaders will still threading their way through backmarkers who had not yet pitted and when McLaughlin lost time behind Todd Hazelwood (#35 SP Tools ZB Commodore) on Lap 21, Whincup took the initiative to throw his ZB down the inside at Kolb Corner.

They touched mid-corner but McLaughlin held on, and also survived when Whincup had a big look at the other end of Barbagallo’s ‘back’ straight.

Van Gisbergen lost net one position from his starting berth to run seventh in the opening laps but rose to the nominal lead before taking his CPS on Lap 26, as did Will Davison (#23 Milwaukee Mustang) and Tim Slade (#14 Freightliner ZB Commodore).

With most of the field, and indeed all of the front-runners, having therefore been through the lane for at least two tyres as per the SuperSprint format, the top end of the timing screen was largely unchanged in net terms.

The most notable change was McLaughlin’s partial recovery to an effective second position, behind Coulthard, with Whincup effectively third from Mostert, Percat, and Waters.

Van Gisbergen had ceded a spot to Lee Holdsworth through the cycle but passed the #5 The Bottle-O Mustang when he made a superior run off Kolb Corner on Lap 29.

He virtually repeated the move on Holdsworth’s sixth-placed team-mate Waters three laps later, by which time the order had fully cleansed after the completion of all compulsory pit stops.

Percat then gifted the Kiwi fifth position when he ran the #8 Holden Guaranteed Value ZB Commodore wide at Kolb Corner on Lap 34.

Coulthard continued to enjoy a lead which oscillated a few tenths either side of the two-second mark for the last 20 laps to bag his second race win of the season.

The margin between #12 and #17 at the chequered flag was 2.2225s, while Mostert was almost eight seconds back from the race winner.

“It’s awesome to win in the dark, all the good s### happens after dark, so I’m pumped,” said Coulthard.

“Thanks to all my guys, Shell V-Power Racing; congrats to Scotty for finishing second. It’s a lot of fun to drive.

“Scotty and I both spoke about it (the start) before the start of the race. I was like, ‘I either need a blinder and get in front of you or you need to get a blinder and I slot in behind you’. Thankfully it went my way.

McLaughlin was heard remarking about his clutch on his radio during the cool down lap, but seemed to accept responsbility for the start in his post-race interview.

“I absolutely ballsed that thing up,” he admitted.

“I’ve got to look at it and see what goes on. But my team-mate did a great job, getting another one-two is awesome.

“I hope the fans enjoyed the night race. Pretty cool from our point.

“Man it’s so hard to see the dirty track and stuff, had a couple of moments, but sik, awesome.”

The big battle in the latter laps turned out to be that between the Triple Eight Race Engineering duo, but Whincup was initially told by engineer David Cauchi to let van Gisbergen past.

Whincup argued that van Gisbergen would not be able to catch Mostert and challenge for a podium in the four laps which remained at that point in time and the call was quickly reversed, allowing him to hang on to the spot.

Slade ended up 11th while Simona De Silvestro continued to show some of her better form at Barbagallo by taking 12th in the #78 Harvey Norman Altima, the first of the Kelly Racing entries.

Rick Kelly (#15 Castrol Altima) was next of the Nissans in 15th, while Mark Winterbottom (#18 Irwin ZB Commodore) finished 18th from 21st on the grid after an error on Lap 2 which saw him run off and take Hazelwood with him.

Hazelwood could only manage 23rd while James Courtney was 25th in the 25-car field after an early right-front puncture for the #22 Mobil 1 Mega ZB Commodore.

McLaughlin continues to lead the championship, by a reduced 112-point margin over Coulthard.

The Virgin Australia Supercars Championship field is next on-track tomorrow with Practice 3 at 1305 local time/1505 AEST, to set the starting order for the following Armor All Qualifying session.