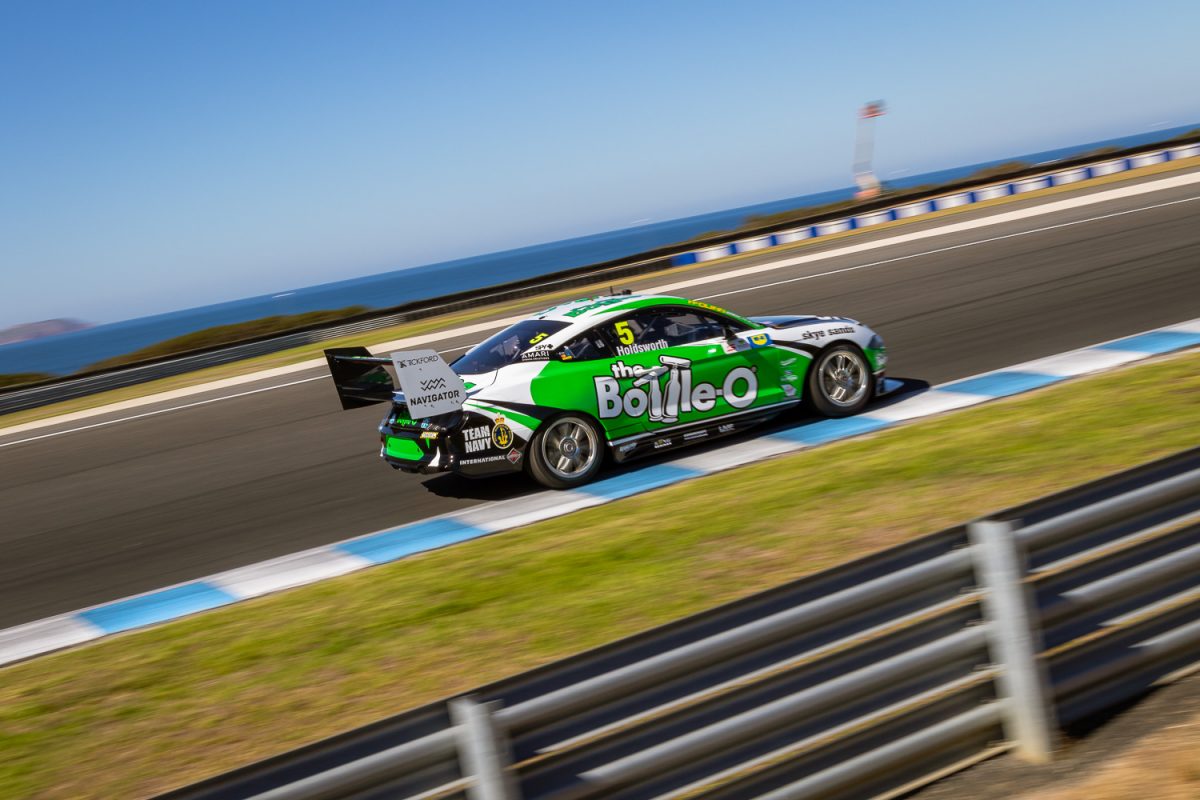 Lee Holdsworth believes a test day would have avoided a ‘guessing game’ for Ford teams at Perth but remains confident Tickford will quickly understand the aero changes to the Mustang.

Blue oval squads Tickford and Shell V-Power Racing will be required to run a changed aero package on its Mustang following a ruling by Supercars that is designed to achieve technical parity across the Ford, Holden and Nissan models.

Smaller rear wing endplates have been constructed and fitted alongside a reduced gurney flap and front undertray prior to this weekend’s Pirtek Perth SuperNight.

These have arrived following a centre of gravity adjustment last month and after Supercars had initially signed off on the Mustang aero package last year.

Holdsworth says having to adapt to changes on the run at Symmons Plains and Perth has not been ideal with the latest tweaks potentially leaving teams with a guessing game as to how the adjustments will affect the car.

“It’s not ideal to be going to (the track), for the last two rounds this year, not knowing what you’re going to have (underneath you),” Holdsworth told Speedcafe.com.

“It’s really a bit of a guessing game, knowing what these changes are going to do. It would be nice to have a test day before the event so that we go there with something that we know, like most other teams, or manufacturers.

“Look, it is what it is, there’s no point dwelling on it.

“We’ve just got to get on with it and I think that our team will get on top of it pretty quickly and we’ll be strong, so just looking forward to getting underway but it’s a bit frustrating.”

Holdsworth has found adapting to the Mustang a challenge itself this year having joined Tickford after racing the Holden Commodore for the last four years.

The three-time race winner, who is currently 15th in the standings, revealed earlier this year that he has had to re-program his driving style.

While happy with the progress made in that department, this weekend he is eager to deliver a solid round, something he admits has been lacking so far this year.

The 36-year-old will face the added challenge of racing on a new track surface at Barbagallo Wanneroo Raceway, under lights.

“I think they’ve (each race weekend) all been compromised by some issue,” said Holdsworth, who has cracked the top 10 three times in 10 races to date.

“I had issues with entry stability at the first round, wasn’t really in tune with the car and then the next few rounds (we were) probably starting a little further back than what I’d like, but made my way forward a little bit in the races.

“The race pace has been there, but qualifying is key at the moment. Phillip Island was obviously not a great couple of days on the Saturday and Sunday there, but on the Friday we had a very good car.

“I feel like qualifying will be the key this weekend, probably more so than any other weekend we’ve had in Perth in the past, where tyre degradation (now) won’t be such a big thing so qualifying will become much more important, so that’s the focus.

“Obviously everyone’s got the same sort of focus. We all want to start up the front and just bring home some really solid points this weekend, but I don’t really have an objective as such.

“I’m just going out there to further improve my connection with the car and with my engineer and the team and make more gains.”

Holdsworth will hit the track for the first time on Thursday with opening practice scheduled for 1840 local time/2040 AEST.