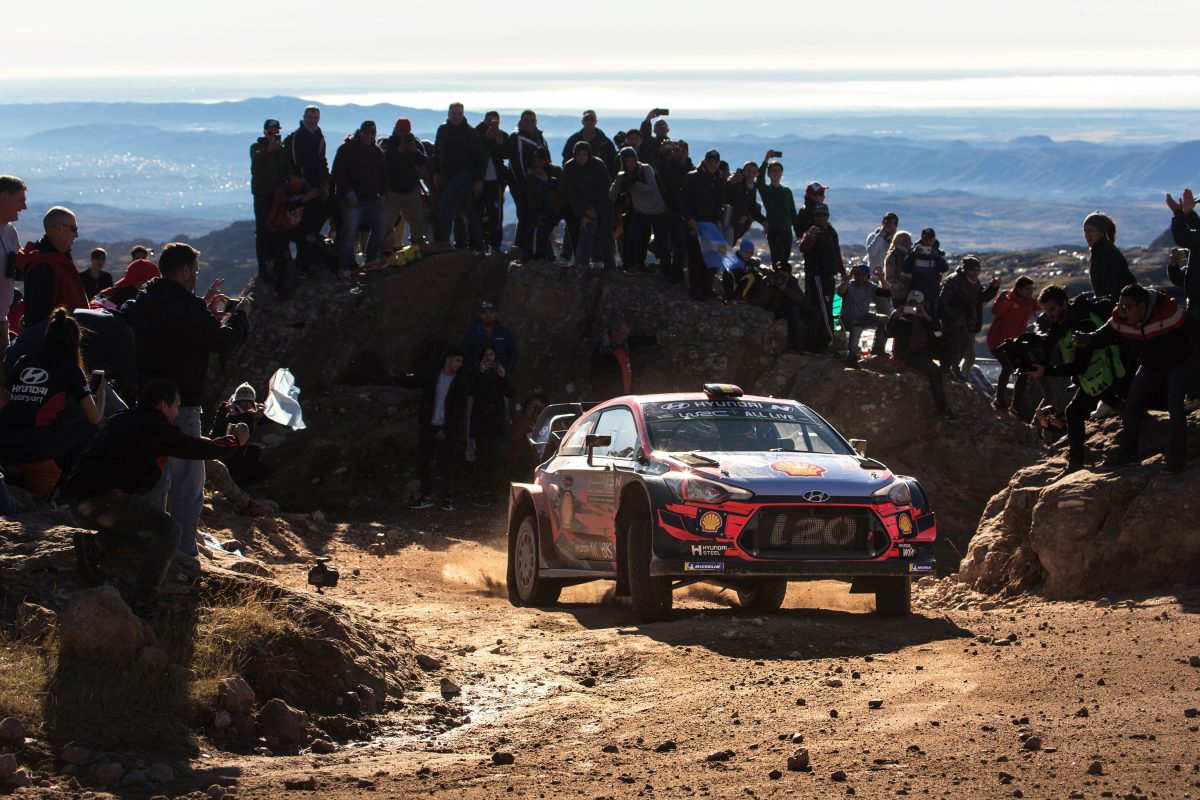 Thierry Neuville has stretched his margin atop the World Rally Championship with a second consecutive victory in a Hyundai one-two in Argentina.

The Belgian finished 48.4s ahead of Andreas Mikkelsen as Citroen’s Sebastien Ogier edged Toyota Gazoo’s Kris Meeke in a see-sawing battle for the final step on the podium.

Ogier won the Power Stage, in which Neuville claimed third, meaning that 10 points separate them at the sharp end of the drivers’ standings after five rounds.

Neuville had been vying for the rally lead with the three Toyotas for much of the first full day of competition in Argentina.

The #11 i20 ended Friday in first position after Meeke lost time due to road position, Ott Tanak spun as a result of driveshaft problems, and Jari-Matti Latvala picked up a puncture late in the day.

At that point, Ogier sat second by 11.9s, but Tanak drove himself back into contention with two stage wins on the Saturday morning loop, putting him 6.4s off the pace.

Ogier dropped to sixth having hit a gatepost and damaged his C3’s power steering, while Meeke had brake fade and had to carry a puncture through the latter stages of the morning.

Tanak’s hopes of the event win died with his battery on Special Stage 14 and the Estonian eventually came home eighth overall with an extra point from the Power Stage.

The dramas meant that Mikkelsen, who bagged a third stage win at the end of that Saturday afternoon loop, was second to Neuville by 45.7s.

Meeke suffered a further setback when he was penalised 10 seconds for shortcutting the same gateway which Ogier hit, due to what had been a closed gate at recce being left open, and dropped behind the recovering Frenchman to fourth position.

The Brit went and won SS16 before moving 5.2s ahead of Ogier with just the Power Stage to come, but another puncture cost him any bonus points and saw him drop back to fourth.

Ogier was 16.4s back from the Hyundais of Neuville and Mikkelsen.

“This is a really great feeling,” said Neuville.

“The car has been absolutely perfect all weekend and I have felt comfortable, quick and in control throughout the event. We have taken some strong stage wins and shown the performance of our i20 Coupe WRC in some very challenging conditions.

“It has been an amazing team result, not only at the rally, but also everyone working tirelessly in Germany (team base).”

Latvala overhauled the third Hyundai of Dani Sordo on SS17 to claim fifth overall, as well as second in the Power Stage.

Sordo grabbed two Power Stage points on his way to sixth, ahead of Teemu Suninen.

The latter’s M-Sport Ford team-mate, Elfyn Evans, went out on SS10 after hitting a boulder and rolling his Fiesta.

Citroen also saw just one of their two Manufacturer class cars make the finish after Esapekka Lappi crashed out at the end of Friday afternoon.

WRC2 Pro honours went to Citroen’s Mads Ostberg in ninth outright and WRC2 to Pedro Heller in a privately-entered Ford in 10th outright.