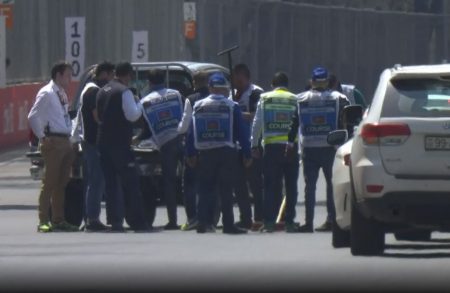 Formula 1 race director Michael Masi has explained how a manhole cover failed to trigger the end of Practice 1 in Baku.

Opening practice for this weekend’s Azerbaijan Grand Prix was abandoned when George Russell’s Williams sustained heavy damage when a manhole cover lifted out of the track surface.

Having been loosened by Charles Leclerc’s Ferrari moments earlier, the aerodynamics underneath Russell’s car lifted it into the floor of the car.

With the session immediately suspended, Masi inspected the troublesome section of track between Turns 2 and 3.

He subsequently elected to end the session with more than an hour remaining to allow the circuit time to effect repairs.

“From what we’ve seen from our preliminary investigations it looks as though one of the clamps underneath one of the manholes has actually failed,” Masi told Sky Sports.

“There’s no explanation at this point as to why, but what we’ve done from precautionary point of view is, (there’s) in excess of 300 manhole covers around the circuit, so we’ve checked every single one.

“At the end of the day safety is paramount so we cancelled the end of FP1 and then with regards to F2 qualifying, moved that back and told the circuit, ‘take as long as you need to make sure that the job’s done properly’.

“From what we’ve seen so far we’re quite confident, and we’ll go through a further program tonight and a written program for the rest of the weekend.

“The short time they’ve done a few further checks again just to make sure, and everything seems to be in order,” added the Australian.

“We’ve seen these types of incidents happen previously, I think Monte Carlo was the last one a number of years ago.

“(It’s) Not something that any of us wish upon, but no different to a car when something breaks and you don’t know. It happens.”

Work on the track was completed in time to allow Practice 2 to begin as scheduled, just three and a half hours after Practice 1 had been cancelled.