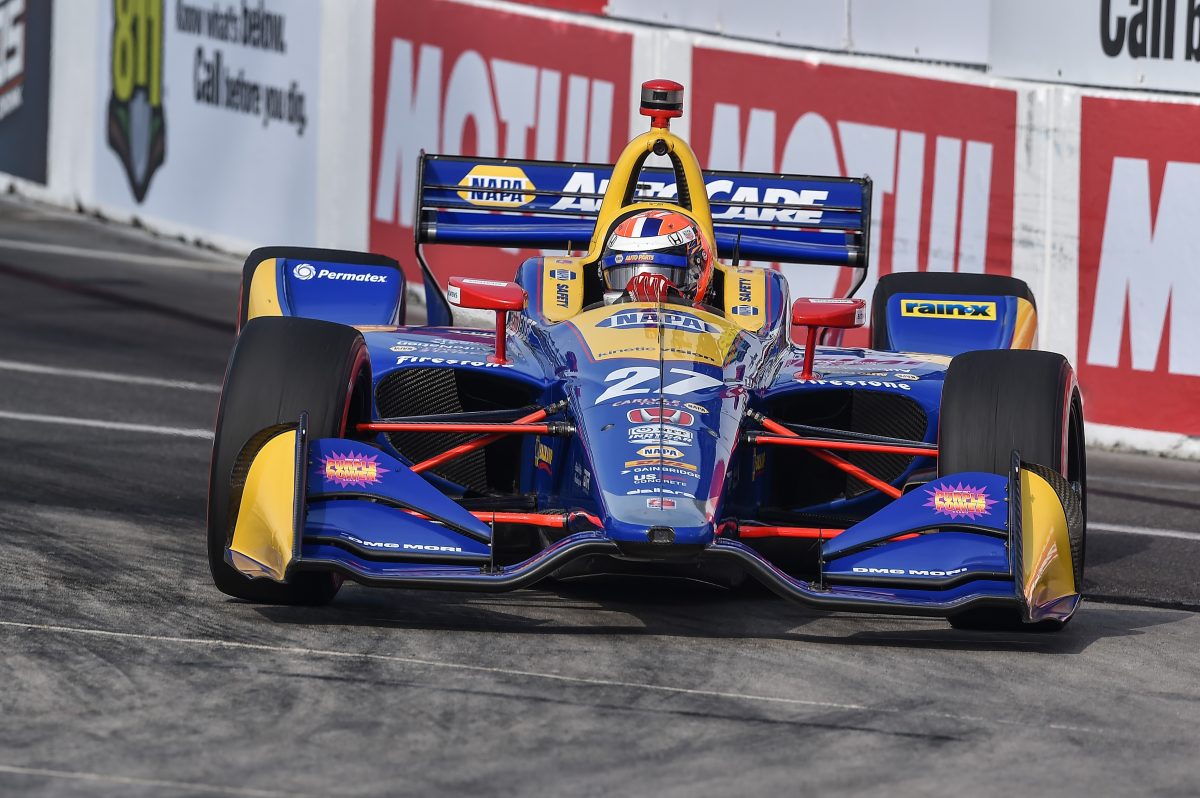 Alexander Rossi has taken a 20-second victory in the Grand Prix of Long Beach, ahead of Josef Newgarden and Scott Dixon.

Rossi survived early attacks from Dixon to lead 80 of the 85 laps and become the fourth different winner in four races this IndyCar season, while Will Power grafted to seventh after an overboost drama and an off.

The top four on the grid held position when the green flag flew for the first time, despite Dixon (#9 Chip Ganassi Racing Honda) trying to fashion a move on the pole-sitting #27 Andretti Autosport Honda.

After an early Caution for an incident between Spencer Pigot (#21 Ed Carpenter Racing Chevrolet), Marcus Ericsson (#7 Schmidt Peterson Honda), and Jack Harvey (#60 Meyer-Shank w/ SPM Honda), Dixon had another crack at Rossi on the Lap 5 restart but again had to get back into file.

Rossi started on new alternate compound tyres and gapped Dixon, on used alternates, to the tune of around seven seconds shortly before each pitted for a first time on Lap 26 and switched to primary tyres.

Power, who qualified third, therefore inherited held the lead for a couple of laps before emerging in front of Dixon, only for Newgarden (#2 Team Penske Chevrolet) to jump them both in the cycle having run fourth until the pit stops began.

After being held up by traffic, Power then experienced overboost at the hairpin on Lap 33 which caused his #12 Team Penske Chevrolet to bog down and Dixon got alongside.

The Queenslander braked deep on the Kiwi’s outside at Turn 1 but that was too deep and he ran long into the run-off, dropping from third to eighth.

Rossi and Dixon took their second and final pit stops on Lap 56 but the latter dumped a pile of time due to a problem connecting the fuel hose.

The 2016 Indianapolis 500 winner continued to lead comfortably from Newgarden, who retained second having stopped on Lap 57.

Graham Rahal, who gained a position at the start to run fifth, and another courtesy of Power’s moment, found himself third in the #15 Rahal Letterman Lanigan Honda, ahead of Ryan Hunter-Reay (#28 Andretti Autosport Honda) and Dixon.

Rossi and Newgarden had lonely races thereafter, aside from the former encountering a backmarker, but Dixon passed a fuel-starved Hunter-Reay on Lap 82.

Third position went down to a final lap dice between Rahal and Dixon which was ultimately resolved by officials.

Rahal pinched a brake into Turn 8 and moved left to block Dixon on the next straight, causing the Ganassi driver to touch the right-rear tyre on Car #15.

Their positions on-track remained unchanged but they were switched shortly after the finish.

Hunter-Reay survived in fifth ahead of Simon Pagenaud (#22 Team Penske Chevrolet) and Power.

Newgarden leads Rossi by 28 points at the top of the table as the series moves to Indianapolis, firstly for a race around the road course on May 10-11 (local time).