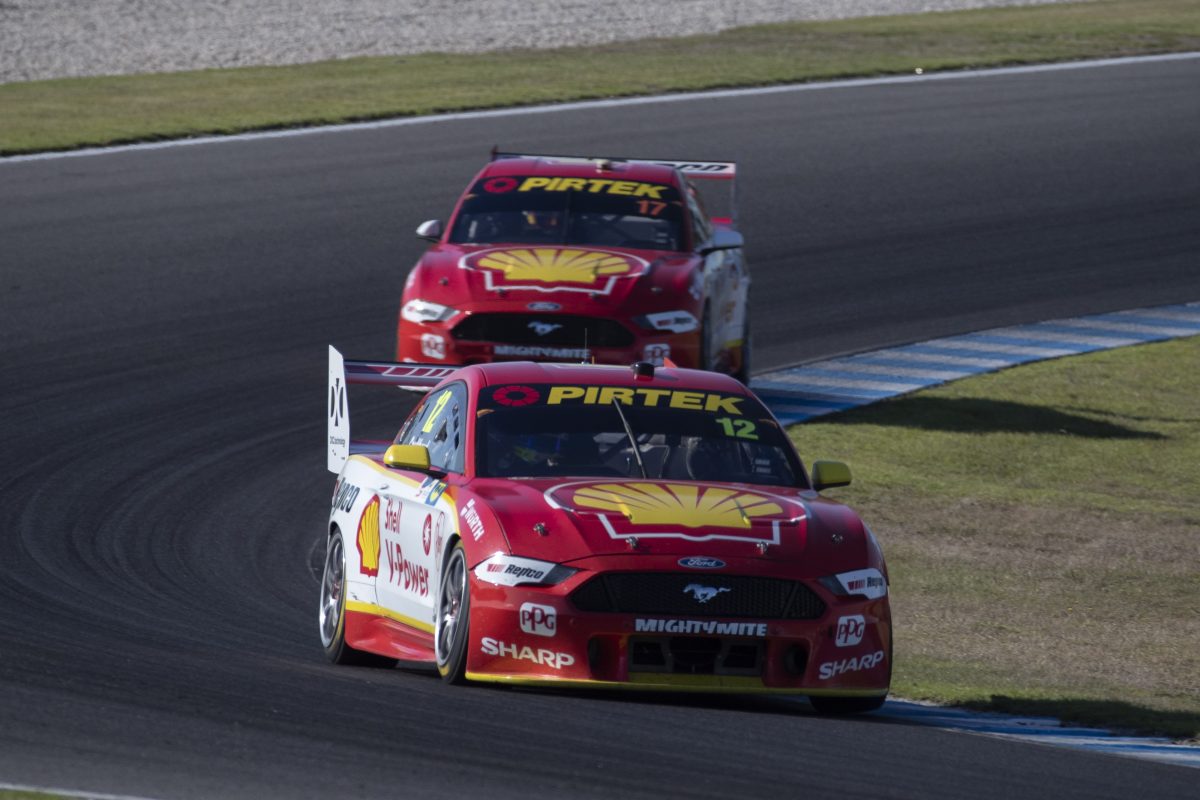 Shell V-Power Racing Team’s Fabian Coulthard and Scott McLaughlin are still unsure as to how they managed to swap positions during Race 10 at the WD-40 Phillip Island SuperSprint.

Coulthard took victory ahead of his team-mate, but it had in fact been McLaughlin that was around 1.5s to the good when the first cycle of compulsory pit stops kicked off with the opening of the official window at the end of Lap 5.

The eventual race winner somehow jumped the pole-sitter in the cycle despite trailing by 1.5s when McLaughlin peeled off, himself pitting two laps the wrong side of the undercut, and taking on around seven litres more fuel, worth almost two seconds of time at the prescribed 3.75 litres per lap flow rate.

But for the second pit stop cycle, the DJR Team Penske Mustangs ran in that order in relation to each other for the balance of the 45-lap race, with Coulthard enjoying an advantage of at or just under a second for the last 10 laps or so.

When asked if he was surprised to resume his race ahead of McLaughlin after the opening pit stops, Coulthard responded, “Absolutely, I was.

“I thought I would come out of the pits and Scott would go past me on the straight but I’m not sure what happened.

“We were focusing on what we were doing, but it was a bit of a surprise.”

McLaughlin explained that he did not have any obvious drama on his in lap or out lap, and the pit stop itself did not appear problematic either, leaving the championship leader to only guess where the time might have been lost.

“At the end of the day, Fabs drove a great race and their car’s been fast. Take nothing from his win or anything like that, we’ve got to look around and have a think and just get on with it at the next race.

“I don’t know what the deal was. I was a little bit slow on the in lap, but I’m pretty sure that I was the same as yesterday so I’m always there or thereabouts.

“It’s something we’ll have to genuinely look at and see what happened.”

The win was Coulthard’s first in 27 races dating back to the Sunday of last May’s Winton SuperSprint.

It was also DJR Team Penske’s third in the space of nine days after McLaughlin took out the opener of the Tyrepower Tasmania SuperSprint a weekend prior, a point not lost on Coulthard.

“It’s awesome for the team, a one-two both days,” he noted.

“Everyone’s been working very hard at our race team to give us fast cars, and obviously this last couple of weeks has been pretty hard for crews.

“We’re a Queensland-based team, they’ve been on the road for nearly two weeks now – Tassie last week, Phillip Island this week – so I’m pretty sure everyone’s pretty keen to get home.

“Our race today was pretty good. I got a good start, until I tried to pull second gear and it wouldn’t come out of gear, so that’s life, but I was looking forward to having another drag race with Scotty into (Turn) 1, like we did yesterday.

“We’ve had a quick car all year, just unfortunately haven’t had the luck. Hopefully my luck’s changed.

“The last four races have been good to us, three seconds (positions) and a first so it’s going in the right direction.”

McLaughlin, meanwhile, refuted questions that the team discouraged them from fighting amongst themselves in the closing stages.

“We were both hammer and tong; Anton (De Pasquale, third place) reckons we were only doing about 20 percent but we were genuinely having a crack,” he quipped.

“And mine were pretty much torched behind the car, it’s the same whenever you’re following someone. That was the way.”

The symmetrical one-two finishes at Phillip Island make for an unchanged margin of 124 points from championship leader McLaughlin to Coulthard in second place.

The gap to third position, however, which twice changed hands during the weekend and is now held by Chaz Mostert, has grown from 36 points to 119 in the past two days.