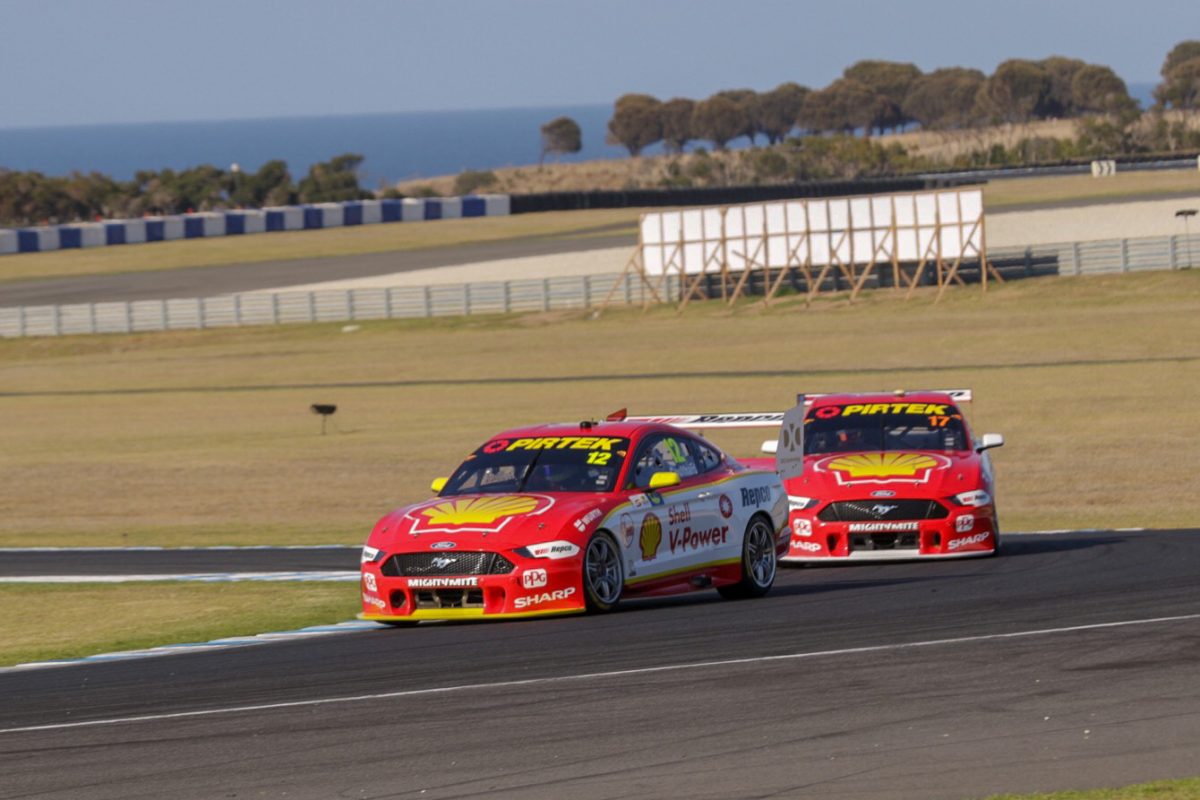 Fabian Coulthard has led yet another Shell V-Power Racing one-two in Practice 4 at Phillip Island as less than half a tenth covered the top four Mustangs.

Coulthard pipped team-mate Scott McLaughlin by 0.0141s with one of the last laps of the half-hour session which sets the starting order for Armor All Qualifying later in the morning.

Red Bull Holden Racing Team’s Jamie Whincup (#88 ZB Commodore) and Shane van Gisbergen (#97 ZB Commodore) will both have to go into Part 1 of qualifying after finishing Practice 4 in 12th and 21st respectively.

Boost Mobile Racing’s James Golding was as high as second position and ended up the lead ZB Commodore runner in fifth position in Car #34, less than a tenth faster than James Courtney in the #22 Mobil 1 Mega ZB Commodore, while Race 9 podium finisher Andre Heimgartner (#7 Plus Fitness Altima) was best of the Nissans in 11th.

McLaughlin spent the vast majority of the piece in a familiar first position but still opted for new tyres for his final run.

Car #17 was usurped by Mostert with the chequered flag out, and then Waters, who bumped Heimgartner out of the top 10, before McLaughlin went back to the top with a 1:30.2014s.

Coulthard, however, earned bragging rights within DJR Team Penske and indeed the whole 24-car field when he subsequently came through to clock a 1:30.1873s in the #12 Mustang.

The Kiwi noted how close DJRTP’s fellow Ford operators were in the session after the Stapylton Mustangs dominated the day prior.

“I think they’ve definitely caught up,” he observed.

“That’s what we do, you never sit on your hands, you try and make your car better. We’ve just showed that we rolled our car out good and the others have caught up.

“I think it’s the wind direction,” he added regarding the change in pace.

“It plays havoc here, so I think that’s probably the contributing factor. Yesterday it was helping us and today not so much.

“In places it felt just as good, some other areas we’re struggling but I think that’s down to the wind.”

Golding was only 20th before his fastest lap, which was 0.4150s away from Coulthard’s, while seventh through 10th was Will Davison (#23 Milwaukee Mustang), Anton De Pasquale (#99 Penrite ZB Commodore), Todd Hazelwood (#35 Matt Stone Racing ZB Commodore), and Nick Percat (#8 7-Eleven ZB Commodore).

Whincup, who had a rear wing adjustment ahead of his final run, was 0.6226s off the pace while van Gisbergen reportedly went through several sets of springs and still found himself 1.2934s slower than the benchmark.

“Nothing more to report, we still haven’t found the right car around here,” said Whincup.

“We changed another five or six things and didn’t really find any gold unfortunately. We’ll go again for qualifying.

“There are over a hundred and fifty different things to try, I feel like we’ve gone through fifty or sixty this weekend.

“Understeer, oversteer, but certainly where we’re dumping a heap of time is not getting off the corner down the straights. Definitely the area to look at is trying to improve the rear.”

Armor All Qualifying for Race 10 starts at 1110 local time/AEST.