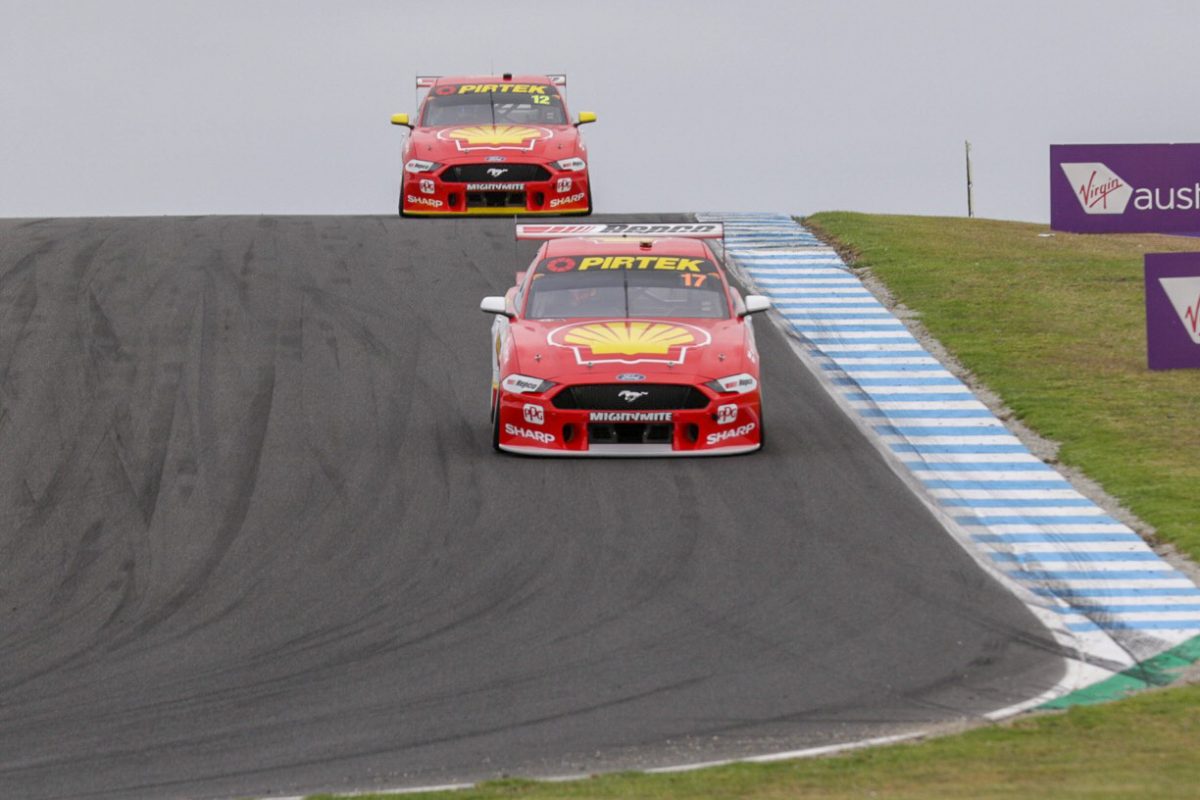 It was not all plain sailing for the Shell V-Power Mustangs, both of which face a post-race investigation into a minor pit stop breach, while each of Whincup and Mark Winterbottom lost wheels during the 27-lap affair.

Cameron Waters joined Whincup on the retirement list with broken right-rear suspension after a clash with Shane van Gisbergen amid their three-way battle with Rick Kelly over sixth position.

Remarkably, James Courtney and Tim Slade suffered identical looking right-front tyre failures as they approached Doohan Corner within a few car lengths of each other nearing the midpoint of the first race of the WD-40 Phillip Island SuperSprint.

All of that overshadowed Andre Heimgartner’s drive to third in the #7 Plus Fitness Altima, his best solo result and Kelly Racing’s best of the year to date by far, after an impressive move on team co-owner Rick Kelly.

The latter was shuffled back to seventh despite a strong start in the #15 Castrol Altima, with fourth through sixth at the finish filled by David Reynolds (#9 Penrite ZB Commodore), Chaz Mostert (#55 Supercheap Auto Mustang), and van Gisbergen (#97 Red Bull HRT ZB Commodore).

McLaughlin and Coulthard made an even start from the front row but the latter could not hold his line on the outside of Doohan Corner, while Kelly jumped from sixth to third, ahead of Heimgartner, a slow-starting Mostert, and Will Davison.

Van Gisbergen was 11th from ninth on the grid at the end of the standing lap but moved back into the top 10 when Nick Percat got loose through Stoner Corner on Lap 2 and consequently ran long at the Turn 4 Hairpin, while Whincup was attacking Winterbottom for 17th.

The DJR Team Penske duo was gapping the field at ease, moving to three seconds up after just four laps, while Winterbottom fell all the way to the rear of the field with a suspected right-rear tyre issue which he persevered with until the compulsory pit stop window opened at the end of Lap 5.

The Irwin Racing ZB Commodore was joined in pit lane by seven others, who would have had a view to the closure of pit lane in the event of a Safety Car.

Among them were McLaughlin and Kelly, who had strategic preference over their team-mates due to track position, but Coulthard and Heimgartner were into the lane next time around anyway.

The red-and-white Mustangs continued together in the same order, while Heimgartner pulled off a slick move in Kelly through The Hayshed on Lap 7.

Reynolds had started 12th but stayed out slightly longer than most as he pitted from the lead at the end of Lap 8 and slotted back onto the race track between the #7 and #15 Altimas, thanks also to a fast stop.

Whincup ran three laps longer on his first stint but disaster struck when his car was dropped onto its wheels before the right-front on the #88 Triple Eight ZB Commodore had been fully tightened. 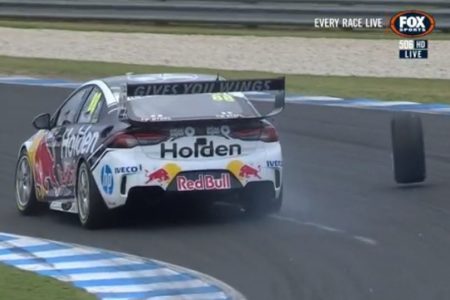 Despite trying to crawl back to the pits, he lost the wheel at Siberia and a Safety Car was called not long after he came to rest on the outside of The Hayshed.

As the race restarted on Lap 18, word came through from race control that the two DJR Team Penske entries were under investigation for a possible breach of the new-for-2019 line locker rule designed to prevent spinning wheels during pit stops.

The matter will go to a post-race investigation although Supercars Head of Motorsport Adrian Burgess advised that any penalty would be levied against the team.

“With both of the pits stops, our guys in our bunkers looking at all the telemetry on both cars there,” he explained.

“Automated handbrake system has failed in the middle of the pit stop and then reactivated.

“In line with what we’ve done with other participants in previous races, it’s a team points and a penalty.”

McLaughlin was ecstatic with his fifth win in the last seven races at Phillip Island.

“Unreal, it’s great for the team, one-two, we just sort of controlled the race from the start which is awesome,” he said.

“It’s awesome to get a win here again, I love this place.”

Waters was pressuring Kelly shortly after the restart but as he bumped the Nissan through Siberia on Lap 22, van Gisbergen ranged up on the outside.

The #6 Monster Energy Mustang rode up on Car #97 and came down with a thud which broke its right-rear corner and saw Waters make an early exit despite getting back to pit lane.

Slade still ended up 17th in the #14 Alliance ZB Commodore, five positions up on Courtney in the #22 Walkinshaw Andretti United ZB Commodore, who finished a lap down.

Winterbottom was a position better off than his fellow championship winner after the #18 Irwin Tools ZB Commodore lost its right-rear wheel on Lap 19, which is under investigation as is Whincup’s own drama.

McLaughlin’s championship lead over Coulthard is now 136 points, with Reynolds up to third at 65 points further back, and Whincup down to seventh.

Tomorrow’s program starts with Practice 4 from 0920 local time/AEST, with that session setting the starting order for the following knockout Armor All Qualifying session.