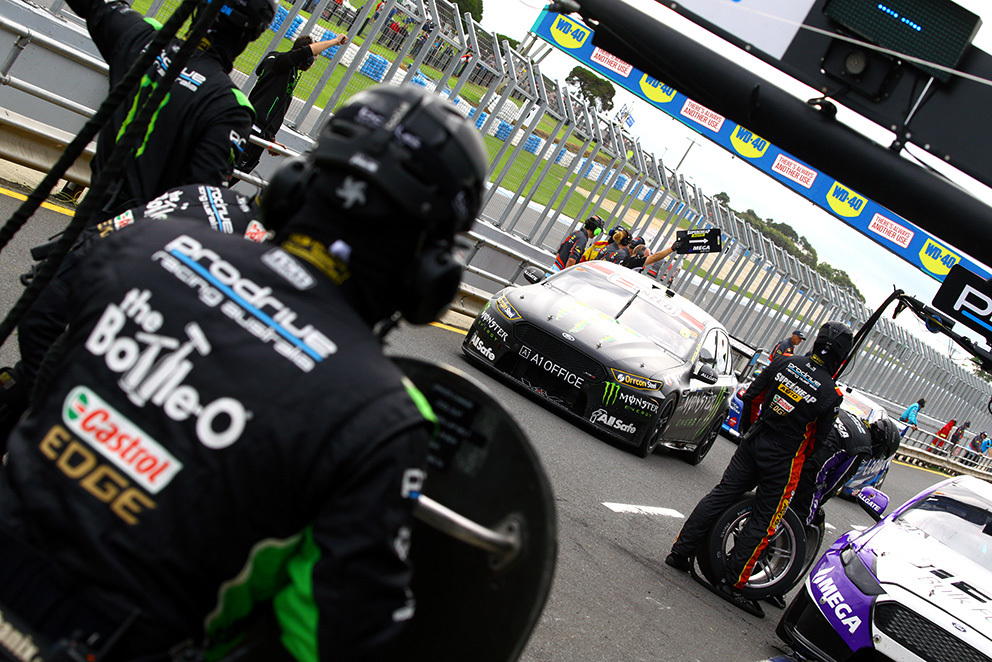 The regulations around pit lane closure under Safety Car at this weekend’s WD-40 Phillip Island SuperSprint have been released, revealing a slight difference to how other series use the practice.

Supercars will trial the rule in Races 9 and 10 of the season in a bid to eliminate cars stacking in pit lane, which is common practice when a Safety Car is called.

Closing the pit lane does present a major downside, however, as drivers who have not completed their compulsory pit stop(s) prior to a Safety Car will be trapped while those who have done so can catch up, introducing a major level of uncertainty in strategic considerations.

There are suggestions that, in order to avoid such risk, there will simply be a rush to pit as early as possible, somewhat negating the safety benefit.

While IndyCar and NASCAR already use the practice, which caught out Will Power and Alexander Rossi in Texas last month, the further supplementary regulations for this weekend’s event at the Phillip Island Grand Prix Circuit reveal a different process for Supercars.

In those North American series, pit lane does open during the Safety Car period once the field has been bunched up, discouraging continued high-speed driving to the lane.

At Phillip Island, however, any service taken under Safety Car will not be counted as a compulsory pit stop for the duration of the period.

In the event that a Safety Car is called while a car is already on its way to pit lane, the line which crosses the track at pit entry, officially known as the ‘SC1 line’, will be the threshold as to whether or not the pit stop will count as a CPS.

Drivers must have crossed the SC1 line, which is akin to IndyCar’s ‘commitment line’, before Safety Car conditions have been activated on timing in order to be allowed to make a CPS.

The clause essentially means that the car must be on the pit entry road, although not necessarily at the speed limit line, by the time the Safety Car is called by race control.

The regulations have also been written in such a way which means that drivers will not be able to take a CPS right at the time of a Safety Car restart, owing to the need to cross the control line first.

Drivers will be required to make one compulsory pit stop to change at least two tyres during Saturday’s 120km race, and at least two in order to meet the mandated 120-litre fuel drop for Sunday’s 200km race (as detailed in Schedule A2 of the Operations Manual, referred to in the excerpt below).

Phillip Island is arguably the most appropriate place to trial pit lane closure, last used by Supercars almost two decades ago, given that its pit lane is generally one of the more congested on the calendar due to its narrowness and the size of the pit bays.

The issue was, however, put in the spotlight at the first event of the season in Adelaide when Rick Kelly turned Chaz Mostert into the pit wall when the majority of the field dived into the lane under Safety Car.

Practice 1 at the fourth event of the 2019 Virgin Australia Supercars Championship starts on Friday at 1135 local time/AEST.

1.4 SC DEPLOYMENT DURING A RACE

1.4.1 At this Event, delete Rule D10.2.6 in its entirety and replace with the following, noting the additional sub rules.

D10.2.6.1 A Driver may stop at their Pit Bay, but may only re-join the Race Track when the Pit Exit is open.

a) Any Driver that crosses SC1 and then enters Pit lane once the SC is in operation may not stop at their Pit Bay and complete the CPS requirements as specified in Schedule A2.

b) For the purpose of point a) above, the SC will be considered in operation when the Timing screen header changes colour to Yellow.

1.4.2 At this Event, delete Rule D10.2.11 in its entirety and replace with the following, noting the additional sub rule.

D10.2.11 After the SC has entered the Pit Lane, the RD will instruct the yellow flags and SC boards at the flag posts to be replaced with waved green flags until the last Car crosses the Control Line.

10.2.11.1 A Car must cross the Control Line on the Circuit at the end of the SC deployment prior to entering Pit Lane to complete the requirements of a CPS as specified in Schedule A2.