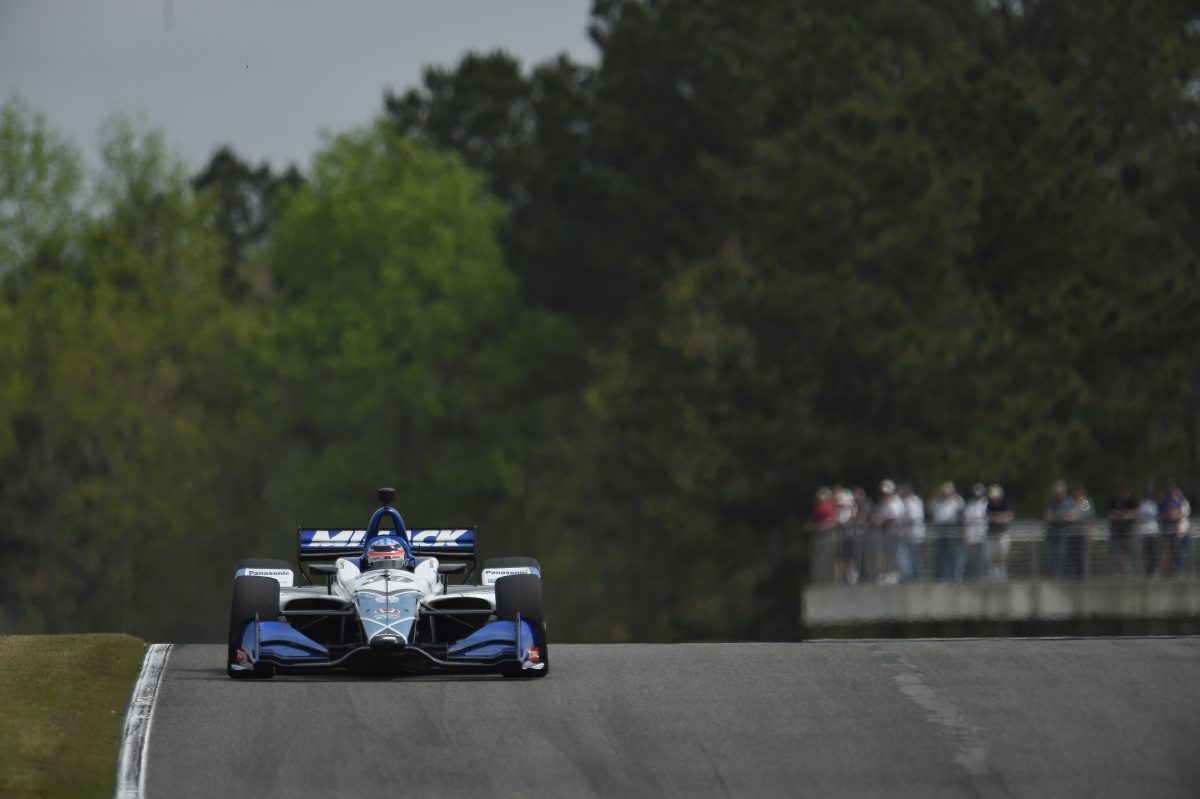 Takuma Sato has led virtually all the way in the Barber Motorsports Park IndyCar race as Scott Dixon finished runner-up.

Sato qualified on pole and led 74 of the 90 laps, with the other 16 explained by a combination of pit stop cycles and strategy divergence on the part of Sebastien Bourdais, who ended up third.

Fourth went to Josef Newgarden and fifth to Alexander Rossi, while Will Power had a spin on his way to 11th position.

Starting alongside Rahal Letterman Lanigan team-mate Graham Rahal, Sato led the field away and held the spot until he pitted for the first time on Lap 17.

Not even a slow left-rear change on the #30 Honda cost Sato the effective lead but Rahal, who came under early pressure from Dixon, dropped down the order as his crew worked on a throttle problem in his first stop.

Dixon therefore started hassling Sato, both of whom were on primary tyres, while the lead gradually came to Bourdais as he ran long in the #18 DCR w/ Vasser-Sullivan Honda on what would be a two-stop strategy.

The Frenchman pitted on Lap 28, at which time Sato’s lead over Dixon had grown in excess of four seconds, with James Hinchcliffe third having also gained a position since the start due to Rahal’s pit lane delay.

Rossi was fourth courtesy largely of a strong start and Newgarden fifth, while Power had plummeted outside the top 20 after spinning and needing to make another pit stop.

Sato and Dixon took their respective second stops on Laps 37 and 38 and emerged in the same order although Bourdais, still on his second stint, split them with the #9 Chip Ganassi Honda right behind Car #18.

Hinchcliffe and Rossi emerged from the cycle each a position lower due to Bourdais’s presence.

Sato continue to circulate seven seconds to the good until a Caution was called due to Rahal’s #15 Honda stopping on the back straight.

The neutralisation ultimately saw everyone dive into the pits, which had been left open long enough for them to do so without being disadvantaged, and put Bourdais back on the same strategy as those around him.

Newgarden, who dropped back down the order during the middle of the race, sat eighth but had new alternate compound tyres on his #2 Team Penske Chevrolet.

Sato made a miscue on Lap 85 and straightlined the Turn 8/Turn 9 chicane but had enough in reserve to still comfortably pace the field as he went on to win by 2.39s.

Dixon and Bourdais ran as you were following the restart, but Rossi passed Hinchcliffe on Lap 66.

However, he didn’t have enough to hold out a resurgent Newgarden, who made side to side contact with the #27 Andretti Autosport Honda on his way through on Lap 87 and took fourth despite starting 16th.

Power had been 10th but his #12 Team Penske Chevrolet ran low on fuel on the second-last lap and lost the spot.

Newgarden leads Dixon by 27 points at the stop of the series ahead of Round 4 at Long Beach this coming weekend (April 12-14 local time).