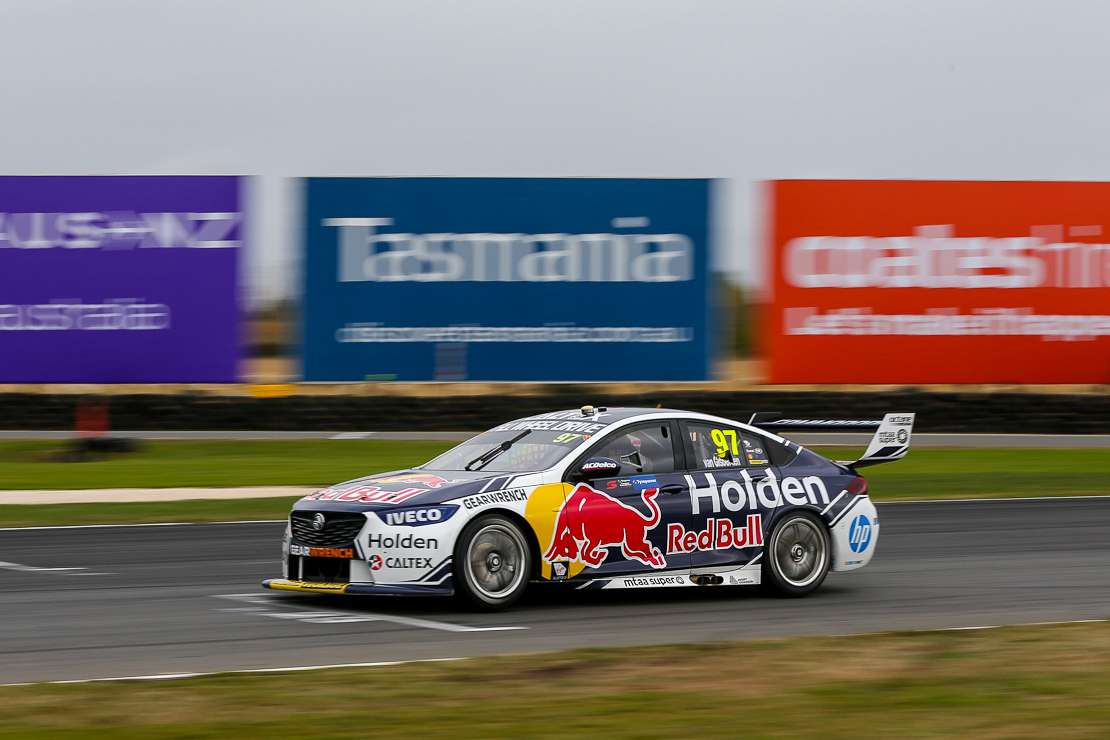 Shane van Gisbergen has qualified on Armor All Pole for Race 8 of the Supercars Championship at Symmons Plains amid late drama between him and Chaz Mostert.

Van Gisbergen snatched pole from Fabian Coulthard in the last 10 seconds of qualifying, just after the latter had knocked David Reynolds off top spot thanks to a tow from team-mate Scott McLaughlin.

Reynolds ended up third and will start alongside Saturday pole-sitter Mark Winterbottom, while McLaughlin qualified fifth and Jamie Whincup 13th.

There was even later drama involving the fastest driver and Chaz Mostert, whose #55 Supercheap Auto Mustang became stuck in the gravel at the hairpin.

Mostert was 10th fastest at the time and still on a flying lap while van Gisbergen had already eased off with the chequered flag out.

The Tickford driver arrived at the braking zone with a slow-moving #97 Red Bull HRT ZB Commodore in front of him and dived for the outside, which saw him sail off into the run-off area.

Officials have not yet advised of any investigation into the matter.

“Awesome session. Really close there as it always is there,” said van Gisbergen, whose fastest lap was a 50.6395s.

“For the team and everybody it’s awesome to be up front and get off the line today and have a good race.”

On the question of the Mostert incident, van Gisbergen argued he was not to blame.

“I thought I gave him enough room, but I haven’t seen it yet,” he said.

“Oh yeah, there’s more than enough room on the right,” he added as he watched a replay.

“I saw he still had his lights on so I gave him all the track on the right side and he’s braked a bit later there.”

He was one of four to come all the way from Part 1 of qualifying, the others being Richie Stanaway (#33 Boost Mobile ZB Commodore) in seventh, Cameron Waters (#6 Monster Energy Mustang) in eighth, and Mostert in 10th.

Part 2 saw the Triple Eight cars run out of sequence by starting the session on warm up tyres of the harder of the two compounds.

As it turned out, the first runs, including the van Gisbergen’s and Whincup’s (#88 Triple Eight ZB Commodore) first proper runs at the stanza, played a large part in setting the top 10.

Tim Slade (#14 Freightliner ZB Commodore) did, however, bump Whincup out of that top 10 before he was sent packing when Winterbottom leaped from 12th to second with the chequered flag out.

Rick Kelly (#15 Castrol Altima) will be the highest starting Nissan in 11th, while Whincup is due to file up in 13th on the starting grid, with Slade splitting them. 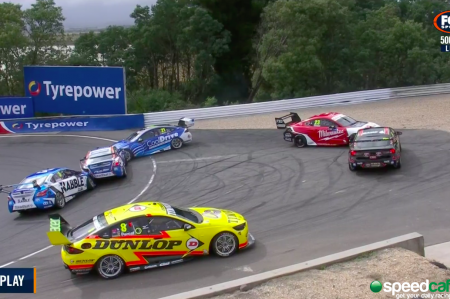 Part 1 of the session saw Macauley Jones out of action early in an incident which involved six cars at the hairpin.

Jones spun his #21 CoolDrive ZB Commodore and was hit in his left-front corner by Andre Heimgartner (#7 Plus Fitness Altima), who was in turn rammed by Kelly Racing team-mate Garry Jacobson (#3 Rabble.Club Altima).

Will Davison ran onto the apron and was run into approximately head-on by De Pasquale as he tried to flick the #23 Milwaukee Mustang back around.

Nick Percat (#8 Dunlop ZB Commodore) was the only driver caught in the mess to escape unscathed as he followed De Pasquale off the track.

Mostert made an early error at the hairpin and ran off at Turn 6 after the red flag caused by the pile-up, but rescued himself when he improved from 13th to second in the final minute of the stanza, bumping Percat out of a Part 2 berth.

Jones was deemed to have caused the red flag, costing him his best lap and forcing him out of the session, although the sanctions were all but academic and he will start at the back of the 25-car field.

Davison is only one position better off in the 23Red Racing entry, while wildcard Jack Smith (#4 SCT Logistics ZB Commodore) qualified 21st.

Parc ferme rules now apply ahead of Race 8 of the season, scheduled for 84 laps, starting at 1405 local time/AEST.

Results: Armor All Qualifying for Race 8