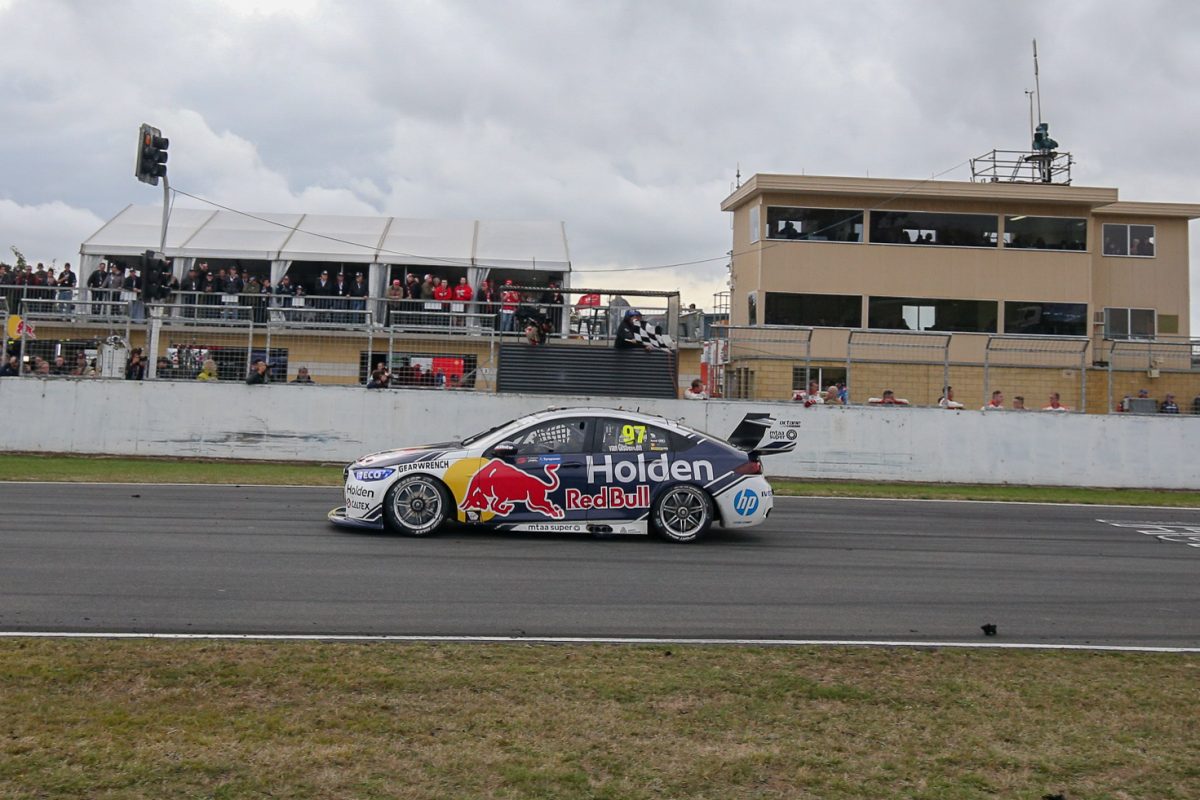 Shane van Gisbergen has delivered Holden its first win of 2019 by beating Fabian Coulthard by over five seconds in Race 8 at the Tyrepower Tasmania SuperSprint.

The Red Bull Holden Racing Team driver fell behind Coulthard and briefly Scott McLaughlin also during the middle stint of the 84-lap race at Symmons Plains, but reclaimed the lead on the road at the halfway mark and gradually pulled away to a 5.1877s victory.

While light rain was falling as the cars left the grid on slicks, van Gisbergen (#97 ZB Commodore) made a good launch to head Coulthard, who also started on the front row, to the Turn 2 left-hander.

Mark Winterbottom’s getaway was superb in the #18 Irwin Tools ZB Commodore and he easily cleared a slow-moving Reynolds (#9 ZB Commodore), who ceded fourth to McLaughlin as they exited Turn 3.

Van Gisbergen came under early pressure from Coulthard, and Winterbottom received a touch from McLaughlin at the hairpin, but they maintained their positions through the opening stint.

Coulthard had dropped to nearly three seconds behind #97 when he pitted for a first time on Lap 24, taking on around 50L.

Winterbottom and Whincup were into the lane two laps later, after the latter had made four positions on the road from his starting berth of 13th, while the former lost track position by taking on around 65 litres.

Van Gisbergen and Reynolds, then the nominal top two, took service on Lap 29 and the former rejoined alongside Coulthard but was forced to file in behind the #12 Mustang.

McLaughlin, who had undercut Coulthard but let his team-mate past easily up the back straight on Lap 28, looked to have also passed van Gisbergen on the Triple Eight driver’s out lap when he fired down the inside at the hairpin and seemed to consolidate the move at Turn 6.

Van Gisbergen, however, criss-crossed McLaughlin and forced his way back past at Turn 7 with some contact, by which time Coulthard was around 2.5s up the road.

Winterbottom passed De Pasquale on Lap 32 while McLaughlin, who reportedly had a possible flatspot, indicated for Reynolds to go by and take third position on the run to Turn 6 on Lap 36.

Van Gisbergen had caught Coulthard by Lap 42 and got the move done at Turn 6 on Lap 43, allowing him to pull away again.

McLaughlin made his second pit stop on Lap 46 while Whincup, who was by then fifth but effectively around seventh, peeled off on Lap 53.

Van Gisbergen was about 2.6s up on the field when his nearest rivals, Coulthard and Reynolds, pitted on Lap 55, prompting the race leader to come in a lap later.

Winterbottom completed his pit stops on Lap 57 and rejoined in fifth, just ahead of Whincup, and behind a stable top four of van Gisbergen, Coulthard, Reynolds, and McLaughlin.

Cold tyres got the better of the Team 18 driver, who ran wide on his out lap at the hairpin and opened to door for Whincup.

As van Gisbergen continued to put margin between himself and Coulthard, Reynolds closed in on the #12 Mustang.

The 2017 Supercheap Auto Bathurst 1000 winner got down Coulthard’s inside at Turn 6 on Lap 66 but, perhaps due to rain which had started falling again, slid wide at Turn 7 and handed the position back immediately.

That proved to be a crucial moment given that Coulthard crept away thereafter, putting 1.6901s between them by the time they got to the chequered flag.

Van Gisbergen, however, was the man of the moment as he broke up the Mustang’s dominance, and particularly McLaughlin’s, to date.

“Awesome race; Fabian kept getting me out of the pits, had a good battle with him and Scotty.

“Made a huge step forward with our car. Thanks to RBHRT to been a mega weekend to bounce back from our shocker last time.”

McLaughlin ran a lonely fourth in the final stint, while Winterbottom didn’t have anything for Whincup in the latter stages despite a small tyre advantage.

The 2013 Bathurst 1000 winner finished sixth, one position behind the man who drove his now Team 18-owned chassis in Pukekohe last year.

De Pasquale was running in the top 10 when his gear lever broke and he finished two laps down in 23rd.

Garry Jacobson was the only DNF after electrical problems in his #3 Rabble.Club Altima.

The rain began to come down with around 25 laps to run, and at one stage became quite challenging, but did not have a noticeable impact on the final outcome.

McLaughlin now leads the championship by 124 points from Coulthard, with Whincup best outside the DJR Team Penske due at 36 points further back while van Gisbergen has moved to fourth.

The fourth event of the season, the WD-40 Phillip Island SuperSprint, will be held next weekend (April 12-14).