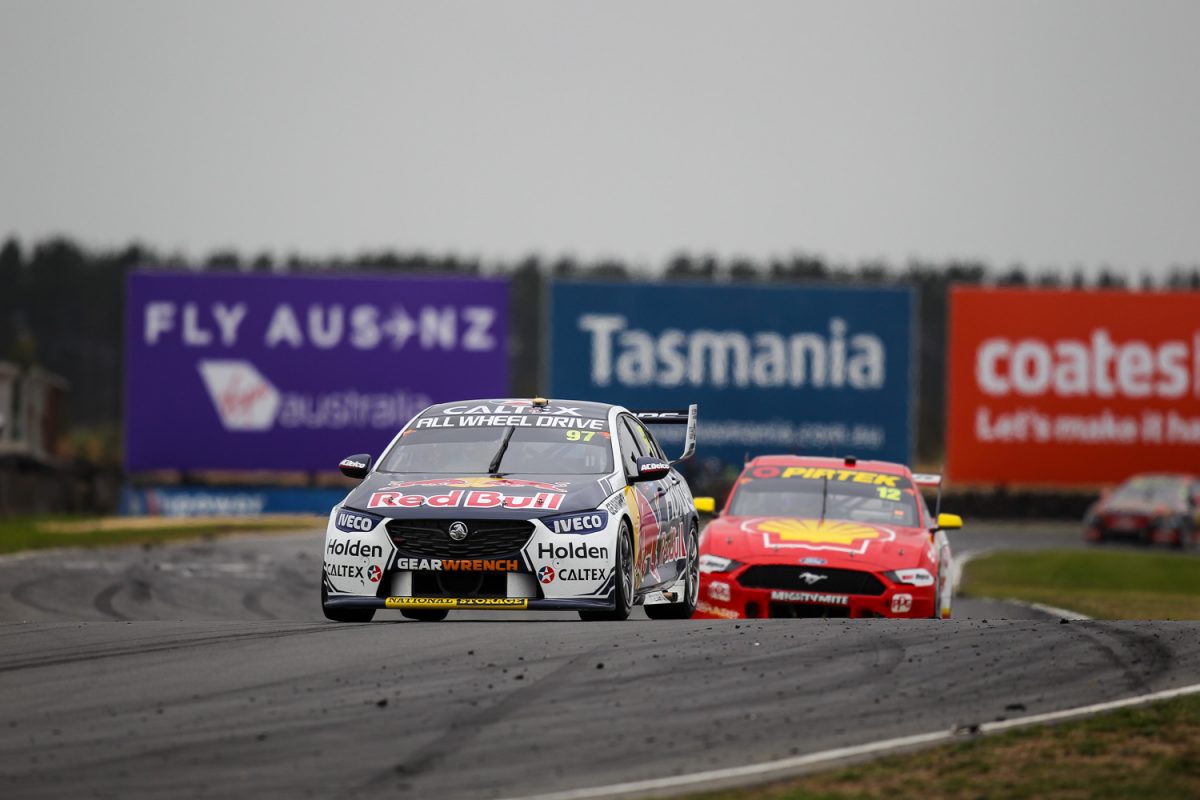 Triple Eight team manager Mark Dutton has described Shane van Gisbergen’s win in Race 8 of the Supercars Championship at Symmons Plains as “something that we really wanted and needed.”

Van Gisbergen picked up the team’s and indeed Holden’s first victory of 2019 after the Ford Mustangs bolted out of the blocks in Adelaide and particularly Albert Park, before Scott McLaughlin extended the blue oval’s streak to seven wins a day prior.

While Mark Winterbottom, in a Triple Eight-built ZB Commodore, finally broke the Mustang’s perfect run of poles in Armor All Qualifying for Race 7, McLaughlin and Fabian Coulthard went on to deliver another one-two for Shell V-Power Racing in that race.

In the final leg of the Tyrepower Tasmania SuperSprint, van Gisbergen headed Coulthard to the chequered flag by just over five seconds after 84 laps.

“Definitely,” Dutton told Speedcafe.com when asked if the win was a relief.

“For Holden fans, for Holden themselves, obviously for us as a team, it’s something that we really wanted and needed.

“Definitely a weight off the shoulders.”

Van Gisbergen himself was ‘super stoked’ to open his account and while Symmons Plains has been a happy hunting ground for Triple Eight in recent years, he paid tribute to his crew’s work back at their Banyo workshop to turn their form around.

“I knew this would be a good opportunity but firstly super stoked and the team, they’ve put in so much hard work so thanks to Red Bull Holden Racing Team,” he said.

“Our cars have got a lot better and we’ve certainly understood the new rules package this year around the suspension set-up and getting better and better.”

The 2016 champion had a self-described ‘horror weekend’ in the preceding event at Albert Park, including an engine failure and a parting of company with a wheel while running fourth.

A third on the Saturday and his win on the Sunday at Symmons Plains have elevated him from 11th to fourth in the championship, and he crept nine points closer to the top of the standings, now holding a 166-point deficit to McLaughlin.

Van Gisbergen felt that his twin podiums on the Apple Isle have been confidence-building but stressed the need to ensure that Triple Eight is mistake-free at future events.

“We had good car speed there and we were on for pretty good results on both the big points days and that’s when we had the motor issue and the wheel fall off, so it really hurt us but good to get some confidence back.

“We were good at Adelaide too, so we’ve just got to keep that performance going and the momentum going and the most important thing, no mistakes, we’ve got to be on top of our game every weekend and the best we can be.”

Van Gisbergen also revealed that he enlisted Dutton as a spotter when rain started falling with around 25 laps remaining at the tricky 2.4km track.

Dutton was dispatched to observe traffic at Turn 6, the most difficult part of the circuit, given that the Kiwi was ‘pioneering’ as the race leader.

“I was just having flashbacks to 2016 when I lunched it with a couple of laps to go,” he said in reference to slipping on oil while leading at the hairpin.

“I was glad I had a couple of seconds lead but being the pioneer in those conditions is so tough, I didn’t have anyone to reference off, didn’t know where to brake, so got Dutto to go down to Turn 6 and he was ready on the radio in case people started going off.

“Once I knew he was there, I was more confident, but in those laps I was just saving tyres so once it dried up I just stepped on it a little bit.”

Dutton clarified that he could in fact sight the corner from the pit wall but confirmed that van Gisbergen had come up with the idea on the run.

“I didn’t have to go anywhere, actually, I was just standing out the front,” he explained.

“It’s actually a really cool thing about this track, you can see so much from the pits and obviously from basically any vantage point.

“I was just able to be across on the pit wall and it’s a good suggestion from Shane, ‘Just let me know if any cars spear off Turn 6.’

“When you’re the leader clearly you’re a pioneer, but when the track’s so short the leader isn’t that far behind other cars, so here you can use it; it was a really good tool.

“You’re just watching there going ‘Ah yeah, they made it round.’ That was good thinking from Shane.”