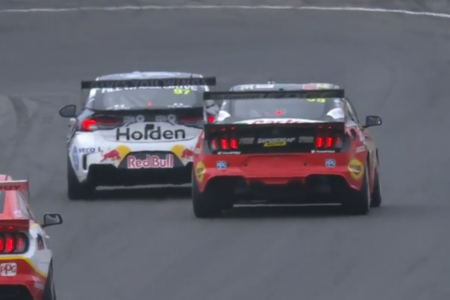 Chaz Mostert has criticised Shane van Gisbergen after their near miss in Armor All Qualifying for Race 8, describing the Triple Eight driver as selfish and his actions ‘borderline dangerous’.

Mostert dived to the run-off area when he came up on a slow-moving #97 Red Bull Holden Racing Team car right at the end of the final part of qualifying at Symmons Plains, and buried his Supercheap Auto Mustang well into the gravel trap.

Van Gisbergen had buttoned off having just set what would prove to be the pole lap while Mostert was still charging in a bid to lift himself from 10th on the starting grid.

While officials decided that no action would be taken, the Tickford Racing driver claims that van Gisbergen’s driving was part of a pattern of behaviour from the 2016 champion.

“Pretty much ended up in Hobart as (Jamie) Whincup would say, so not ideal,” remarked Mostert.

“I don’t know, for some reason Giz always tried to leave it borderline with guys on a lap and he just worries about himself, so it is what it is.

“I had to initially settle the car from him being in place, that’s put me too far down there so didn’t want to jump on the brakes too hard, I would have locked up if I braked any harder.

“But I don’t know, it’s borderline dangerous at the end of the day; he does it a lot.”

Van Gisbergen maintained that he left enough room for those who were still on a flyer to pass.

“I thought I gave him enough room, but I haven’t seen it yet,” said the New Zealander.

“Oh yeah, there’s more than enough room on the right,” he added as he watched a replay.

“I saw he still had his lights on so I gave him all the track on the right side and he’s braked a bit later there.”

Television cameras showed the pair shaking hands after Mostert’s interview, although it is believed that they remain in disagreement about who was at fault.

A stewards summary released a short time ago stated, “A request for review was received from Tickford Racing Pty Ltd alleging that Car #55 was impeded by Car #97 on entry to Turn 4.

“The DRD reviewed the Hawk Eye vision and Judicial Camera footage from Cars #17, #55, and #97, as well as advice received from the Driving Standards Advisor, the matter does not warrant being referred to the Stewards.”

Race 8 of the championship at the Tyrepower Tasmania SuperSprint starts at 1405 local time/AEST.