Winterbottom on pole, Whincup to start 15th in Race 7 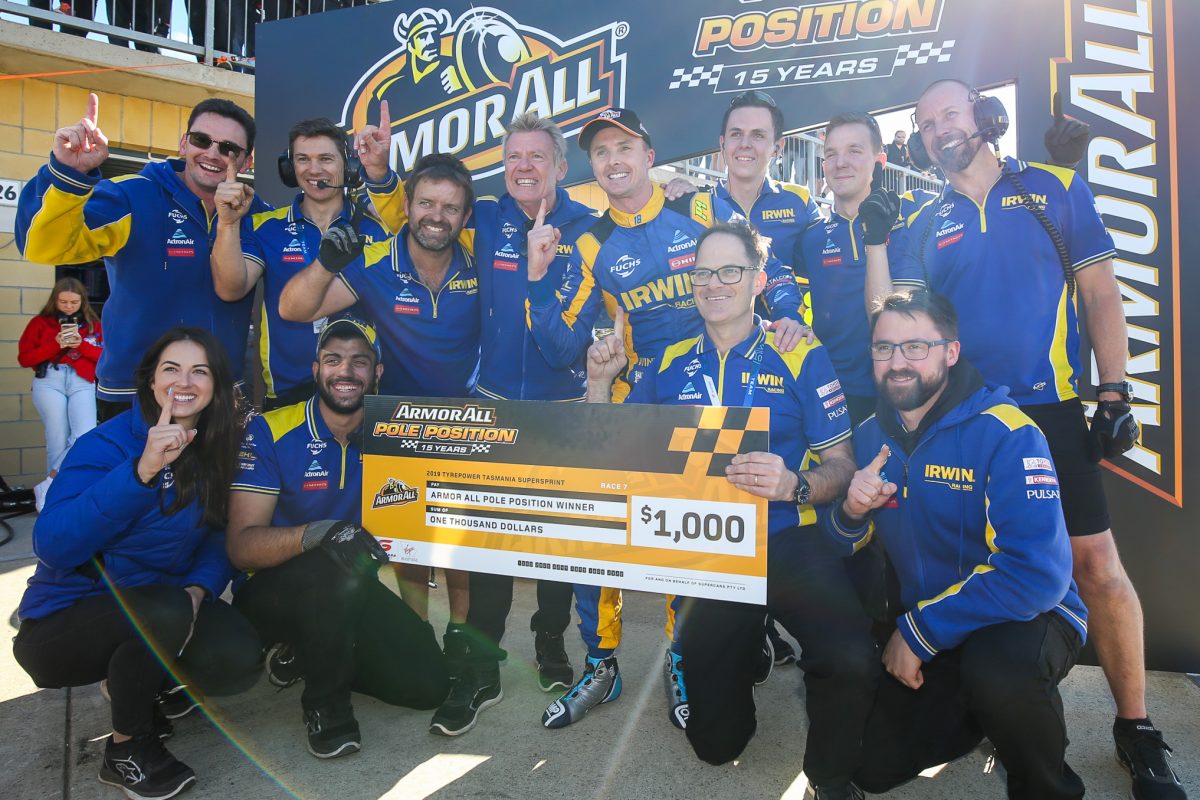 UPDATE: Jamie Whincup has been listed 15th on the starting grid after initially being classified 25th on the qualifying timesheet.

Mark Winterbottom has given Team 18 its first Armor All Pole Position while Jamie Whincup will start Race 7 at Symmons Plains from last after drawing a red flag.

Winterbottom snatched the fastest lap from Shane van Gisbergen with a 50.6920s near the end of the 10-minute third part of knockout qualifying and survived Scott McLaughlin’s late flyer by 0.0040s.

The pole is his first since Townsville in 2016 and the first for Team 18 in its current guise or as any customer entry since Charlie Schwerkolt moved his REC from Dick Johnson Racing.

Irwin Racing has also broken up the dominance of the Ford Mustang by getting a ZB Commodore on pole for the first time in the 2019 Virgin Australia Supercars Championship.

Whincup, on the other hand, buried his Red Bull HRT ZB Commodore in the gravel trap at the Turn 4 hairpin on his first run in Part 2 of qualifying for the first race of the Tyrepower Tasmania SuperSprint.

The Triple Eight driver had dropped a wheel in the dirt under brakes and looped Car #88, meaning he will start at the rear of the 25-car field despite earning a bye through Part 1 of qualifying having set a practice record a day earlier.

McLaughlin sat last of the remaining 10 drivers when all filed into the pits after their first runs in Part 3 of the session, before pulling out a 50.6960s in the #17 Shell V-Power Mustang.

His effort pushed van Gisbergen and the #97 Triple Eight ZB Commodore onto the second row, alongside the second of the DJR Team Penske Mustangs of Fabian Coulthard.

Winterbottom was thrilled with his performance after an off-season change from Tickford Racing to Team 18, which battled in 2018 and underwent significant upheaval in the off-season.

“Super pumped, so proud of my guys; we work so hard and we’ve been building which has been really nice. So proud of them.

“We’re a small team and I keep saying, I think we can do special things. This is just another achievement.

“So proud for Charlie, he’s worked his backside off to put this together. It’s all sort of falling into place and I get to play a part of it. Super cool.”

Three of those four attempted only one run in the final 10-minute stanza with Waters confirming he was conserving tyres having used multiple sets earlier.

Chaz Mostert (#55 Supercheap Auto Mustang) was the first on the outside of the top 10 at the end of Part 2 of qualifying and will share Row 6 of the grid with Nick Percat (#8 Dunlop ZB Commodore), the other driver to advance from Part 1.

Scott Pye missed the cut for Part 2 of qualifying having set an identical time to Percat, who was fifth fastest in the opening 10-minute stanza.

The Walkinshaw Andretti United driver was officially sixth having set his 51.0200s later than the Brad Jones Racing driver had done so and will start 15th in the #2 ZB Commodore.

Rick Kelly was Kelly Racing’s best in 17th (eighth in Part 1, prior to Whincup’s error) in the #15 Castrol Altima, while BJR wildcard Jack Smith will start his first Virgin Australia Supercars Championship race from 21st in the #4 SCT Logistics ZB Commodore.

Andre Heimgartner will start alone on the 13th row of the grid having not set a time due to his Plus Fitness Altima suffering a misfire.

Cars are now in parc ferme ahead of Race 7 of the season, which will be run over 50 laps, from 1640 local time/AEDT.

Results: Armor All Qualifying for Race 7