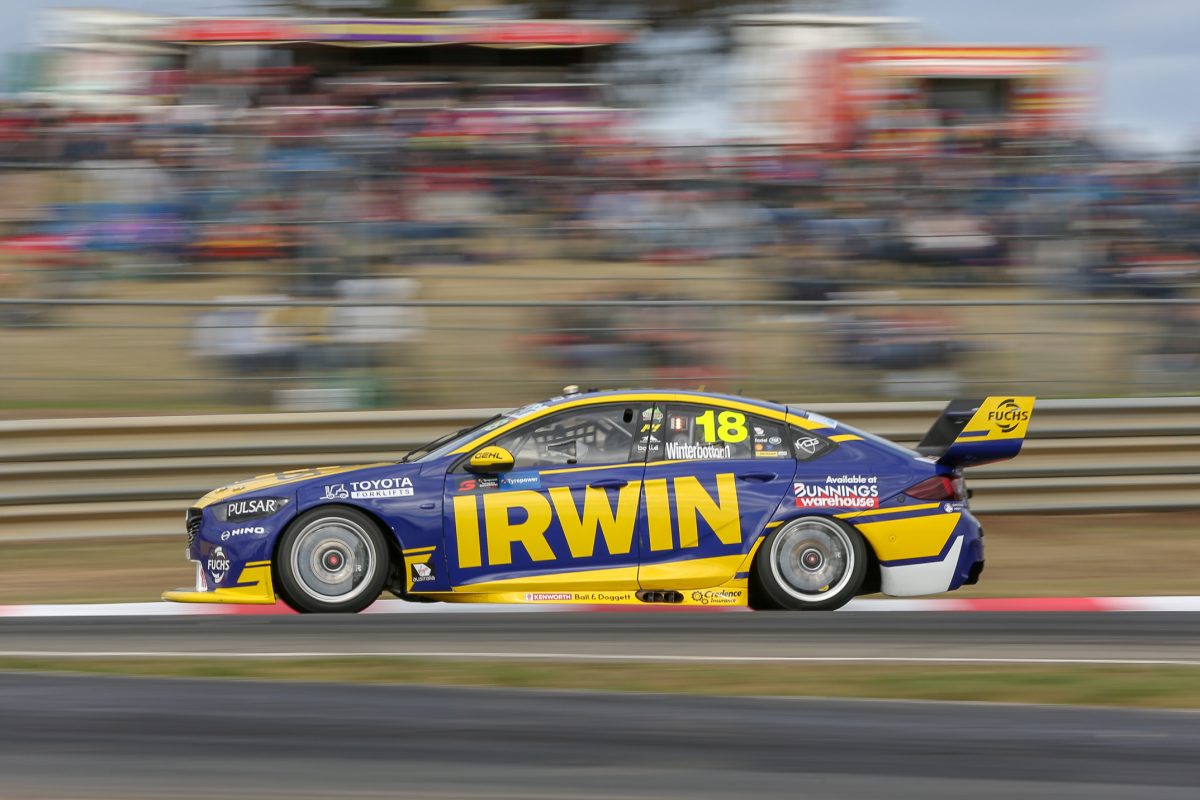 Mark Winterbottom was left frustrated having felt that Jack Smith cost him a podium in Race 7 of the Virgin Australia Supercars Championship at Symmons Plains.

The Irwin Racing driver started from Armor All Pole Position and finished fourth after he was overhauled by Shane van Gisbergen on the penultimate of 50 laps.

Winterbottom held a small advantage over van Gisbergen in the final stages as the pair closed up on Brad Jones Racing wildcard entry Smith, and believed the time he lost behind the teenager was crucial to the outcome of his race.

“He didn’t move out of the way with blue flags,” Winterbottom lamented.

“I dropped a second on that lap and then I was vulnerable.”

The delay gave van Gisbergen an opportunity to attack, the Red Bull Holden Racing Team driver out-dragging Winterbottom out of the hairpin with two laps remaining.

“I tried to defend but I didn’t have enough tyre grip,” Winterbottom explained.

“It’s frustrating because I think we would have had a trophy then, but you can’t control that sort of stuff.”

Van Gisbergen joked immediately after the race that he “did feel like a burglar” and later confirmed that he was helped by Smith’s presence.

“I still would have got to Frosty just, it would have been one lap later” he claimed.

“Certainly blue flags were out.”

“You had to physically bomb him to get past,” recounted Coulthard.

“I think the reason the blue flags works was to let the car know, no dramas.”

McLaughlin stated, “I was a bit surprised.

“He’s allowed to be in front of me, no blue flags and I caught him a bit and thought ‘just get out of the way, man’.

“It’s just easier to get out of the way and make friends in your first race than lose them.”

Smith, however, who is being engineered by the experienced Paul Forgie, believes that he gave the front-runners the opportunity to pass him.

“I’ve heard that people aren’t so happy about it but I felt like I gave them room,” he told Speedcafe.com.

“It might not look like that on the telly but I was waiting for anyone that was behind me to pull alongside and pass and I felt like people just didn’t take the opportunities I was trying to present.

“I didn’t mean for anybody to have their race kind of apparently spoiled, but it seems that that’s the way that they’ve taken it.

“I was asking (Forgie) what I should do and he said to let them pass without any time loss and that was what I was trying to do.

“We had our own race to do and we were doing our best, so he was in my ear telling me what to do and I did exactly what I was told.”

The outcome was somewhat of a down note on a memorable day for Winterbottom, who had earlier scored Irwin Racing’s maiden pole before a sluggish start saw him drop in behind McLaughlin off the line.

He pitted on Lap 20, a lap after then third placed Fabian Coulthard, giving the Car #12 track advantage courtesy of the undercut.

“The start, I thought I’d get a good start too and it bogged and the engine coughed,” Winterbottom revealed.

“I actually had a really good launch and it coughed, so I wanted to lead into one and all that sort of stuff.

“Little bit disappointed, bit hard on myself when I make mistakes, and few little ones there.”

Having stopped nine laps later later, van Gisbergen had the advantage of fresher tyres late in the race, allowing him to close the gap having initially rejoined in sixth, and the Triple Eight driver suggested he “just had a better strategy” despite the free kick.