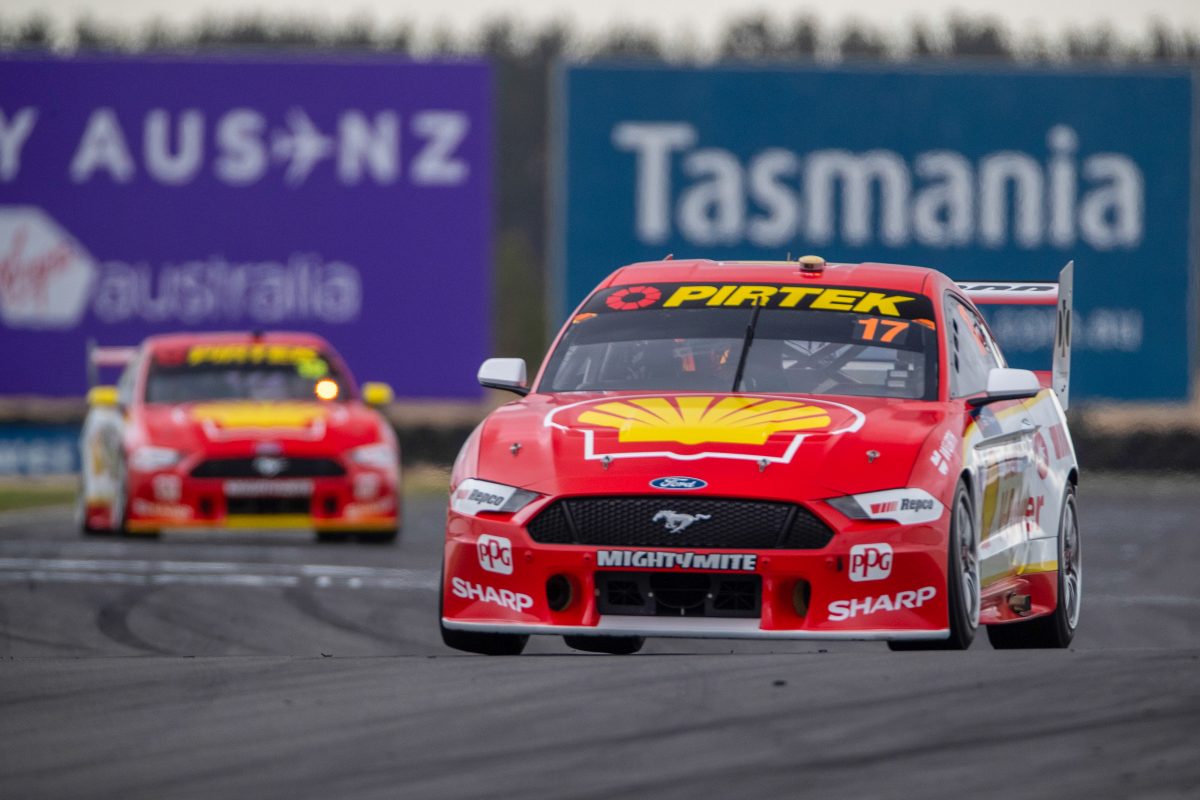 Scott McLaughlin has led Fabian Coulthard to a DJR Team Penske one-two in Race 7 of the Supercars Championship at Symmons Plains, while Jamie Whincup was last after an early incident.

McLaughlin qualified second but took the lead off the start and was untroubled thereafter, while Coulthard had a slightly tougher time on his way to second position in the other Shell V-Power Mustang.

Shane van Gisbergen ensured it was his ZB Commodore on the podium after a late pass on Armor All Pole-sitter Mark Winterbottom, who was held up while lapping wildcard Jack Smith.

Whincup, however, finished almost three laps down in 25th after a Lap 2 hit with Chaz Mostert which pulled his right-front tyre off the bead.

McLaughlin made the better getaway from the front row of the grid and headed Winterbottom (Irwin Racing ZB Commodore) to the Turn 2 left-hander.

Van Gisbergen (Red Bull HRT) was slow off position three and fell behind David Reynolds, who then blazed by Coulthard into third as they tore down the back straight for the first time.

Coulthard reclaimed the spot when he went around the outside of the #9 Penrite ZB Commodore through the kink in the back straight on Lap 5, before closing in on Winterbottom.

The second of the DJR Team Penske drivers appeared to find himself held up by Winterbottom as McLaughlin moved out to an advantage exceeding two seconds after 16 laps.

Van Gisbergen, by that point, was tailing Reynolds but not seriously threatening a pass.

Reynolds and Coulthard were the first two of that top five to take their compulsory pit stops, on Laps 18 and 19 respectively, with both receiving slow service although the Erebus man faring worse.

Winterbottom and McLaughlin were each into the lane a lap later again, and the Team 18 driver fell behind Coulthard as a result of both the undercut and an even tardier pit stop.

The undercut also closed up the two DJR Team Penske Mustangs slightly, although McLaughlin was still well over a second up on Coulthard and gradually pulled away again.

Van Gisbergen waited until Lap 30 to pit and resumed in sixth as he completed the cycle, behind a top five of McLaughlin, Coulthard, Winterbottom, James Courtney, and Reynolds, respectively.

The 2016 champion needed only four laps to bridge the 1.7s gap to Reynolds and pass him up the back straight, and another six to take fourth from Courtney, who used an undercut by pitting at the end of Lap 17 in the #22 Mobil 1 Mega ZB Commodore.

McLaughlin lost around 0.8s lapping Smith on Lap 44 but he had more than three seconds in reserve at that time.

Winterbottom, on the other hand, had van Gisbergen chasing him on fresher tyres and they cleared the fourth Brad Jones Racing entry together at the end of Lap 48, giving the Kiwi in Car #97 a free kick.

Van Gisbergen picked off Winterbottom at Turn 6 next time around to complete the podium in the 50-lap affair.

McLaughlin won by 1.76s, with Coulthard 3.05s up on van Gisbergen in an all-New Zealand top three.

“Great job for Shell V-Power Racing to get a one-two,” said an ill McLaughlin.

“I’ll have a good sleep tonight, watch a bit of the footy and try and come back stronger myself tomorrow.

“That one’s for Ford fans and all our team; we’ve worked hard behind the scenes and there’s been a lot of stuff thrown at us and whatever, but we just fight on and we’re a strong group.”

Whincup started 15th after drawing a red flag in qualifying, and his race unravelled on Lap 2 when he hit the left-rear corner of Mostert’s 11th placed #55 Ford under brakes at Turn 6.

The Triple Eight driver immediately reported “broken front-right” on his radio, although his crew ended up changing only the wheel after Whincup brought #88 into the shed.

The whole process still cost him two laps and his hopes of a solid result were dashed, as was his hold on second place in the championship.

That is now held by Mostert, who is 135 points behind McLaughlin, with Coulthard third and Whincup fourth.

Tomorrow’s program at the Tyrepower Tasmania SuperSprint starts with Practice 4 from 0925 local time/AEST, with that session setting the starting order for the following knockout Armor All Qualifying session.