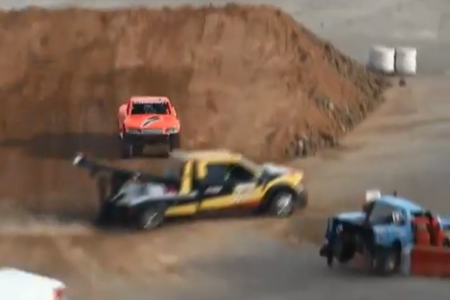 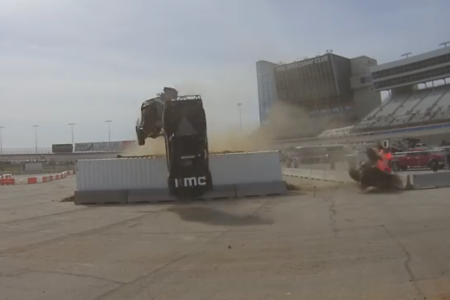 Spectacular footage of a triple rollover involving Matt Brabham, Robby Gordon, and Jeff Hoffman was overshadowed by Gordon’s near-miss with a tow truck in Stadium Super Trucks in Texas.

Bill Hynes made a mess of a landing early in Race 2 which saw him roll and end up snagged on a barrier, prompting a stoppage to the race.

Gordon continued at speed and barely missed a tow truck which was moving towards the scene as he landed off the same jump.

Speedcafe.com understands that Gordon’s radio had failed and he was unaware of the problem.

That incident was arguably more shocking than another wild moment in Race 1 when three trucks rolled together, which was caught in an amazing head-on shot.

Gordon had a moment and skewed off the side of the jump, while Hoffman and Brabham went end over end when they were caught up in the moment.

Gavin Harlien then flew through but avoided the stricken Brabham and Hoffman trucks.

None of the individuals involved in either crash were hurt.