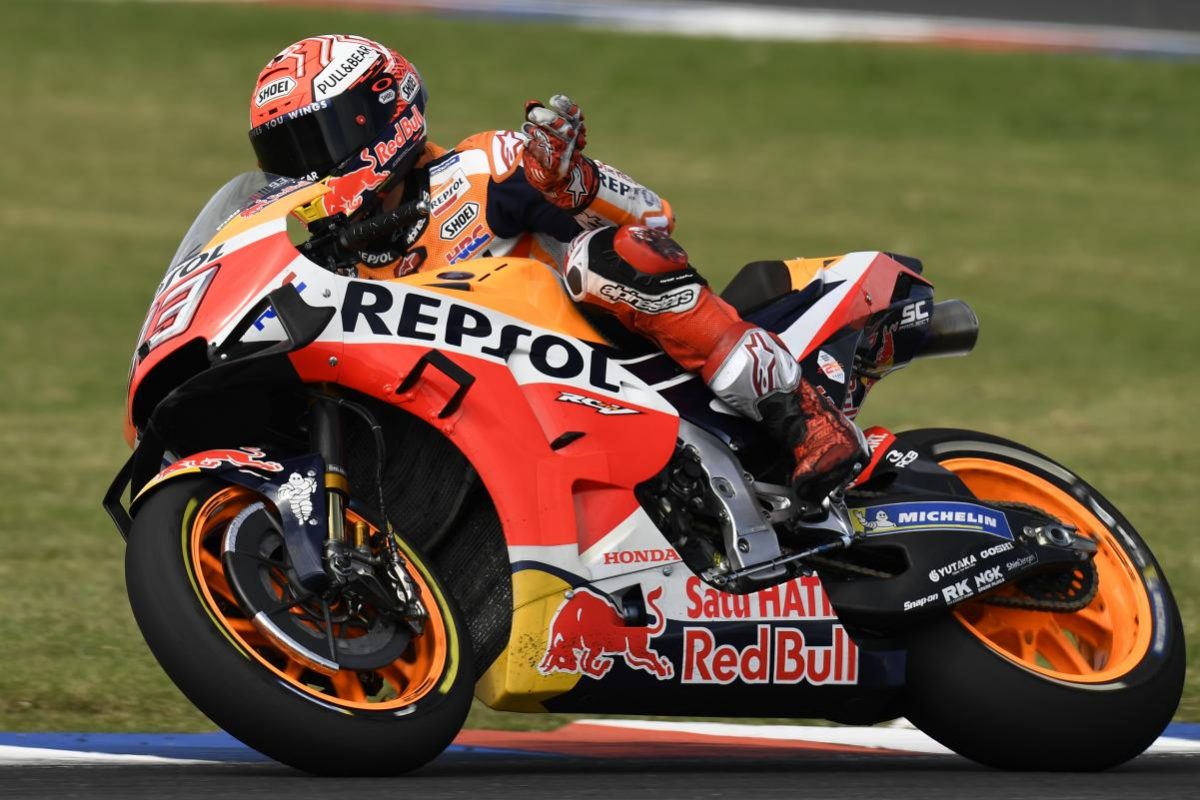 Marc Marquez got the jump on the field at the start and was never challenged again in the Argentina MotoGP.

The Repsol Honda rider got as far as 12.701s ahead in the 25-lap race around the Autodromo Termas de Rio Hondo and took the chequered flag 9.816s to the good after easing off at the end.

Valentino Rossi (Monster Energy Yamaha) finished second, his first podium in 11 races, after diving past Round 1 winner Andrea Dovizioso (Mission Winnow Ducati) on the final lap, a move which handed the outright championship lead to Marquez.

Jack Miller was the second Ducati home in fourth position having dropped as far back as seventh on his Pramac Racing entry, while Franco Morbidelli took out Maverick Viñales with half a lap remaining as they vied for seventh.

Marquez started from pole and took a clear lead to the first corner ahead of Dovizioso, Miller, Rossi, and Viñales, the latter of whom made a poor getaway from the middle of the front row.

Both Rossi and Viñales passed Miller before the end of the lap, at which time Marquez was already 1.049s up the road.

The defending world champion was never seen again and attention quickly turned to the contest for the minor placings.

Miller got back in front of the two Monster Energy Yamahas on Lap 2 and for a handful of laps it was the Pramac Ducati rider, Rossi, and Petronas SRT Yamaha’s Franco Morbidelli fighting for third after the latter qualified sixth.

Rossi passed both Miller and Dovizioso on Lap 6, and the Australian also ceded a spot to Morbidelli at Turn 13.

From there, Dovizioso and Rossi had their own head-to-head stoush, the former aided by his Desmosedici’s superior straight line speed.

He blazed past Rossi on the back straight on Lap 14 and the Yamaha rider bided his time until a couple of laps to go, before a move at Turn 7 on Lap 25 which forced Dovizioso to pick up Bike #04.

The slicing and dicing behind saw Alex Rins, who qualified only 16th, passing both Miller and Morbidelli to take fifth as the Australian made a move on the Italian at Turn 5 on Lap 18.

Rins then put his Suzuki Ecstar machine down the inside of Petrucci’s factory Ducati at Turn 5 on Lap 23, leaving room for Miller to follow.

The Spaniard, however, didn’t have enough to keep up the fight and finished fifth after Miller got by at the start of the penultimate lap.

Viñales had been on to salvage a seventh position, having also dumped time when he ran long at Turn 5 on Lap 16 while in that same spot.

Jorge Lorenzo (Repsol Honda) finished where he started, in 12th, after dropping to last when the lights went out, while Cal Crutchlow (Castrol LCR Honda) was a position further back having served a ride-through while running sixth for a jumpstart.

“Today was a perfect day,” he said.

“I knew that my strongest point was the first five laps, I put all in, and then the difference was one second, two seconds, three seconds, and then I take a good rhythm, I was not pushing, I just try to manage the tyres, try to manage the bike, and it was a really sweet feeling with the bike.”

Rossi seemed just as pleased to be on the podium for the first time since last year’s German MotoGP.

“I’m very happy for me, for my team, and for Yamaha, because it was a long time that I don’t ride on the podium with the two mistakes at the end of last year, and I’m very happy,” he began.

“We needed this result, we work very well from Friday, and I ride like when I was young, and I enjoy very much,” the veteran added with a laugh.

“I expected to have a bit more pace than Dovi but no, so I stay behind, but at the end I have two or three points where I was a bit faster than him, so I try on the last lap, it was good, and Dovi is not able to do his (criss-)cross, and I’m happy.