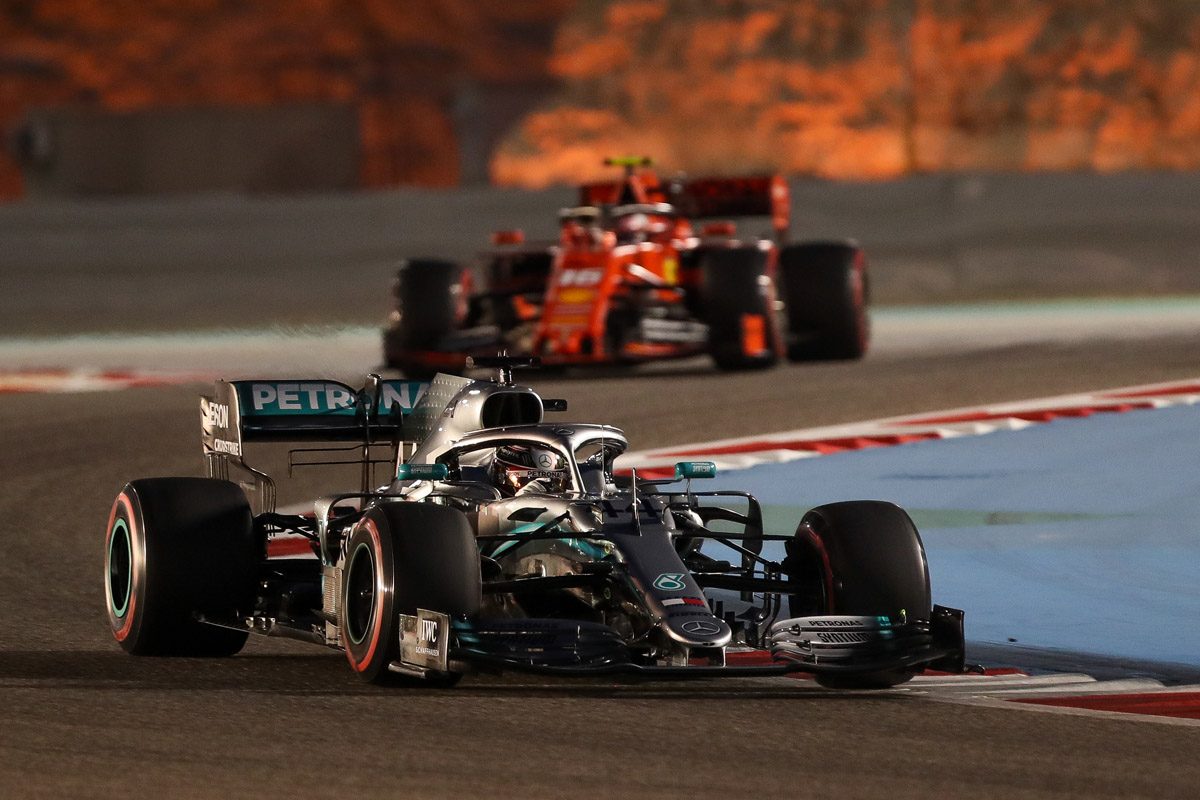 Lewis Hamilton inherited victory in the Bahrain Grand Prix when Charles Leclerc suffered a late energy recovery failure after dominating much of the race.

Starting from pole, Leclerc slipped to third at the start but quickly recomposed himself to race his way back to the front and take the race lead.

Once there he was imperious, opening a comfortable lead while strategy also played out in his favour to almost hand him victory.

A late spin from Vettel dropped him down the order before Ferrari’s woes were then compounded when Leclerc suffered an energy recovery failure, robbing him of 160bhp, with just 10 laps remaining.

Hamilton inherited the lead with Bottas finishing second as Leclerc hung on for third.

Vettel made the better start off the front row, taking the inside line into Turn 1 to move into the lead.

The slow starting Leclerc was picked off by Bottas as he fell to third halfway around the opening lap, and then quickly came under the attention of Hamilton.

A lock up from Bottas at Turn 1 at the start of Lap 2 opened the door for Leclerc and gave Hamilton a run on his team-mate who was demoted to fourth.

In the pack, Romain Grosjean picked up a puncture on the opening lap while Lance Stroll lost his front wing, the pair stopping for repairs and falling to the tail of the field.

The contact would ultimately prove terminal for Grosjean, Haas retiring the Frenchman shortly after the opening round of stops.

Battling over fifth, contact between Max Verstappen and Carlos Sainz left the latter with right front damage at Turn 4.

The Spaniard then had to drag the McLaren around the majority of the lap as he fell to the very tail of the field.

After six laps, Leclerc had closed on team-mate Vettel for the lead, using DRS to put a move on the four-time world champion under brakes into the first corner.

It prompted an immediate counter-attack at Turn 4, Leclerc holding the advantage to reclaim the lead he’d lost off the line.

A strong early stint from Ricciardo saw the Renault climb to sixth in the opening stages, while Hulkenberg’s performance was even more impressive, racing his way up from 17th at the start to be hanging onto the tailcoat of his team-mate.

The pair were running around 15 seconds behind the race leaders and presenting a strategic thorn in the side for Ferrari who had Hamilton in touching distance in third.

Without a gap in the pack to drop either Leclerc or Vettel into, Ferrari had to continue to circulate as the midfield began to take service from Lap 10.

Bottas was the first of the leaders to stop at the end of Lap 12, rejoining behind Verstappen in an effective fourth place and forcing Ferrari’s hand.

Leclerc stopped from the lead on the next lap, followed into the lane by Hamilton as Vettel remained out on track.

The extra lap cost the German, falling to third as Hamilton used the undercut to gain track position on the early race leader.

Having not stopped, Ricciardo briefly headed the race before Leclerc moved through on the Renault at Turn 4, but not before the Australian recorded his first lap in the lead for his new team.

However, on a one-stop strategy, his pace quickly evaporated as he plummeted back down the order as he turned laps more than two seconds slower than team-mate Hulkenberg.

The opening round of stops broke up the battle out front, with Leclerc nearly four seconds ahead of Hamilton, on a set of soft compound tyres, who was three seconds up from Vettel.

Despite running on the theoretically faster set of soft tyres on his car, Hamilton struggled for grip and was quickly caught by Vettel.

Just 10 laps after his stop, Hamilton found the Ferrari easing its way around the outside of the Mercedes at Turn 4 to take the place.

Hamilton took his second stop with 35 laps on the board, dropping to fourth behind Bottas, his stop coming a lap after Vertsappen in fifth had taken his second stop.

Predictably, Ferrari responded with Vettel, who was stationary for 2.3 seconds to have another set of medium compound tyres fitted.

He rejoined just ahead of Hamilton as Leclerc complained of a lack of grip and took to the lane from the race lead.

The race leader held an eight second advantage, but was serviced just a tenth slower than his team-mate a lap earlier to rejoin still in the lead.

A thrilling wheel to wheel exchange between Hamilton and Vettel saw the pair run side by side through turns four and five.

Hamilton attempted to go around the outside of the Ferrari but Vettel held firm, only to repeat the exchange a lap later.

On that occasion Hamilton pulled the same move and forced Vettel into a mistake, dropping the rear end and spinning.

In a double-dose of pain the German not only needed a new set of tyres but also a front wing when it parted company down the back straight a quarter of a lap later.

By the time he’d stopped and rejoined he’d fallen to ninth, emerging just behind the intra-team battle between Ricciardo and Hulkenberg.

The pair had just made contact at the first corner when Ricciardo locked up and slid into the sister car, who was in the process of putting a move on him around the outside.

On a charge, Vettel soon overhauled Lando Norris, Ricciardo, and Hulkenberg to sit fifth, but 26 seconds behind fifth placed Verstappen.

Late drama then followed when Leclerc began struggling for pace, reporting engine issues back to his team as he haemorrhaged time to second-placed Hamilton.

Without energy recovery in his car, it was only a matter of time before Leclerc would see victory taken from his grasp.

The move happened on Lap 49, leaving Leclerc to struggle on in the hope that he could hold on to a podium position ahead of the closing Bottas and Verstappen.

Even that proved a bridge too far, with Bottas easing by the ailing Ferrari as they started Lap 54.

Bizarrely, both Renaults then stopped within metres of one another in the opening complex of corners on Lap 55, Ricciardo reporting the car ‘just cut out’.

Hulkenberg’s by contrast was an engine failure, the two stricken cars triggering a late Safety Car.

With little time remaining, the race ended under Safety Car, a turn of events which enshrined Leclerc in third place behind Bottas and Hamilton.