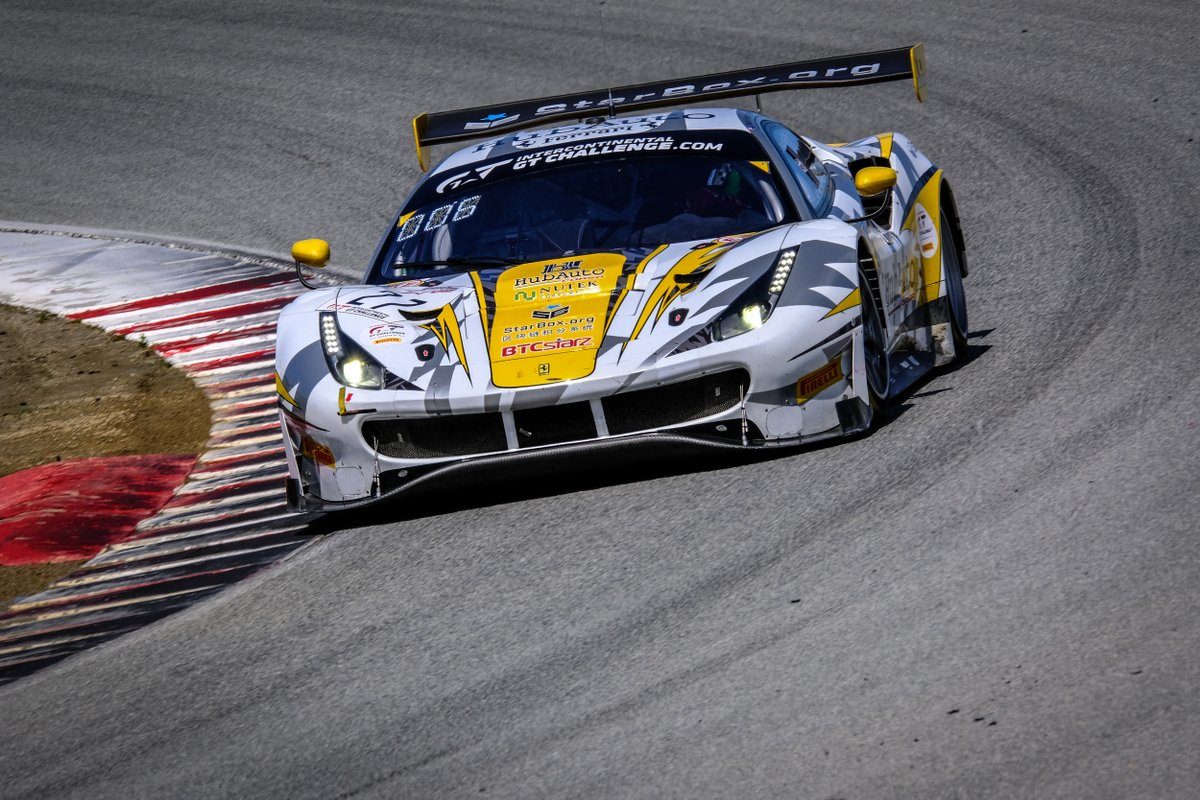 Australians Tim Slade and Nick Foster have combined with Spaniard Miguel Molina to win the California 8 Hours in the HubAuto Corsa Ferrari.

Foster brought the #27 488 GT3 home in a 12.509s victory for the Asian team despite two wild moments in the final five minutes at Laguna Seca.

The first of those was when he squirmed on the ripple strip on the way into the Corkscrew, before a lurid entry onto the main straight as he moved towards the pit wall in front of his crew to take the finish.

“I didn’t know the rules on doing burnouts so I thought, ‘F*** it, we’re in America, so just send it,’” explained Foster.

Matt Campbell, Dennis Olsen, and Dirk Werner, failed to finish after the latter lost drive while leading early in the fifth hour.

He brought the Wright Motorsports-run #912 Porsche 911 GT3 R into pit lane and it did not reappear due to what the team described as a “shifting issue”, costing the Bathurst 12 Hour winners a shot at two from two to start the 2019 Intercontinental GT Challenge.

Foster was fourth-fastest in the Top 10 Shootout before Molina drove up to second position and was shadowing leader Alex Buncombe prior to the commencement of the first pit stops cycle.

The HubAuto Corsa took over the lead after those stops shook out and ran there until a slow pit stop of their own, due to a gas bottle running out, saw it drop back.

However, with the Ferrari displaying strong pace throughout, Slade was tailing first placed Sven Muller in the fifth hour and a second separated them when the latter made his next pit stop.

The Brad Jones Racing Supercars driver stayed on track another lap before handing over to Foster, who emerged in the effective race lead, and the Australians extended their advantage over the field in the next two stints.

They were around 17 seconds up when the #999 GruppeM Mercedes-AMG GT3, which had by then become their main competitor, made its final pit stop.

Raffaele Marciello, who stayed in that car, couldn’t make serious inroads on Foster’s lead on the run home but was a comfortable second position in the end, meaning he, Maxi Buhk, and Maxi Goetz take over at the top of the driver standings.

Slade, a two-time Virgin Australia Supercars Championship race winner, rated the victory as the highlight of his career to date.

Having driven with HubAuto Corsa in the sister car to Foster’s in last year’s Blancpain GT World Challenge Asia, he said the chance to share a car with his countryman made the achievement even more significant.

“Nick and I drove opposite cars last year in Asia so I’ve always wanted to team up and do some races together so I think it makes it extra special.

“We had Miguel along for this weekend and he really set this race up at the start and the team did a great job and I’m super happy for Morris (Chen), the team owner.”

Schnitzer missed out on a podium in a race which ran without Safety Car intervention after Tomczyk incurred a drive-through for turning around the #29 Land Motorsport Audi R8 LMS GT3 Evo at the Corkscrew.

Mostert had taken over the race lead with Wright Motorsports’ misfortune but still needed to make another pit stop to match the effective leader at that time.

Tasmanian Josh Burdon, along with Buncombe and Katsumasa Chiyo, finished 12 laps off the pace in 12th in the #35 KCMG Nissan GT-R.