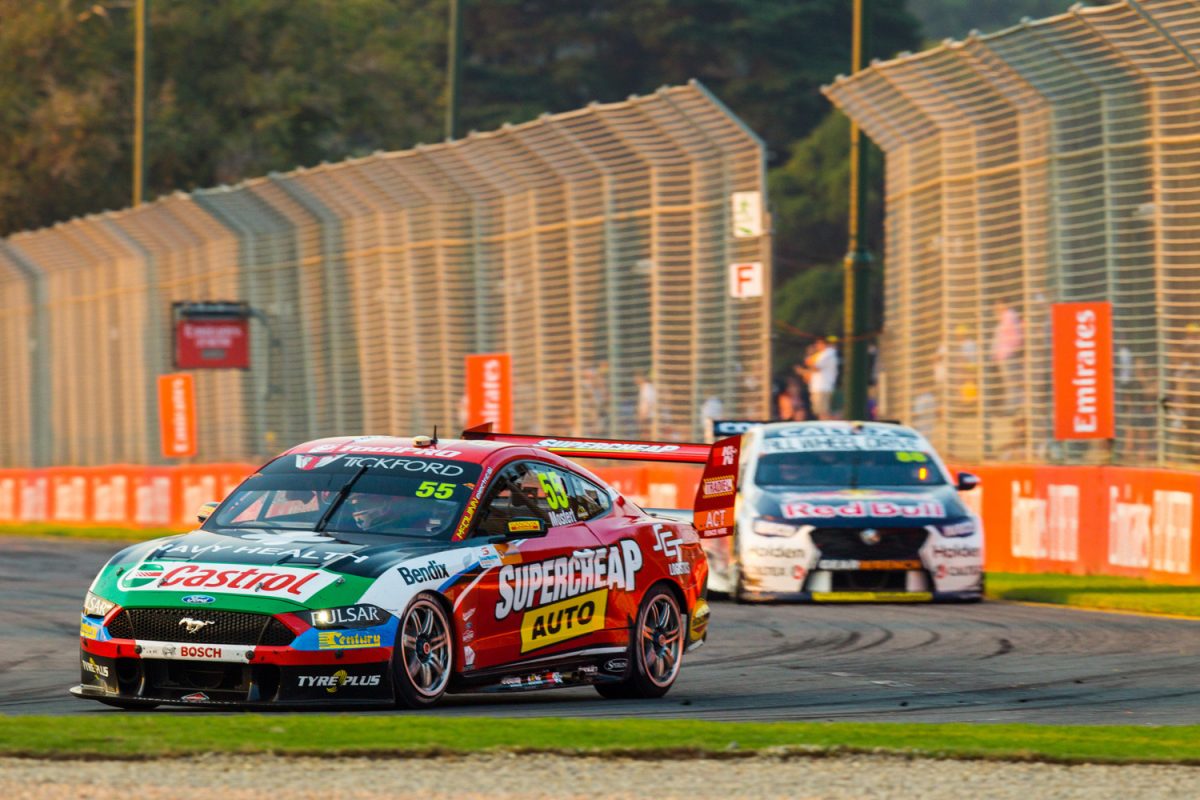 Tickford Racing is continuing to prepare for the Tasmania SuperSprint as per normal amid a ‘Groundhog Day’ parity debate that could trigger changes to the all conquering Ford Mustang.

The squad along with fellow Ford outfit DJR Team Penske are at the centre of a Supercars parity investigation following a flying start for the new Mustang.

Since its debut in Adelaide, Ford’s latest Supercar has claimed all six Armor All Pole Positions and race wins with Scott McLaughlin recording five race victories, while Tickford’s Chaz Mostert has the other.

Tickford has also enjoyed a return of form by scoring as many podiums as it achieved all last season after only six races this term.

The Mustang’s results have led to claims from rival teams that the car, which is currently legal, has an aero and centre of gravity advantage.

This has resulted in Supercars carrying out tests to see if there is a disparity, which could lead to changes to slow the car.

Tickford was among a group of 10 teams that completed a centre of gravity test on Monday and Tuesday.

Team boss Tim Edwards is unsure if alterations to the Mustang will be made and has likened the debate to that of 2015 when the Falcon FGX burst onto the scene.

“I’ve no idea,” Edwards told Speedcafe.com when asked if he expected to be forced to make changes to the Mustang.

“I haven’t heard anything apart from all the stuff I read in the press.

“We will just sit here and carry on preparing for Tassie exactly same.

“To be frank it feels like Groundhog Day to me. The first two rounds of 2015 were very similar and we faced the same backlash back then from people crying parity, and no changes were made to the rules at all.

“We only just won the championship because the Holden teams came charging back at us 100mph.

“It is very easy for people to throw stones if they are not doing a good job and blame somebody else, but this is just 2015 all over again.

“Nothing was changed in the rules as a result of all the tearing up, the world didn’t end and Holdens were still competitive and Frosty hung on to win the championship.”

While the Mustang has enjoyed a strong start to life in Supercars, Edwards is adamant that much of his team’s return to form is down to hard work put in over the off season and not just the arrival of Ford’s new weapon.

Following a difficult 2018, the outfit has conducted an engineering restructure as part of its plan to recapture its past glories.

“There has been a lot of hard work done in the background,” Edwards added.

“We knew what our strengths and weaknesses were at Adelaide and the Grand Prix so we know what has improved on our car and it has come from a lot of hard work.

“People throw stones because they are not doing a good job but the fact is we have improved our car in a lot of ways that are totally unrelated to the Mustang.

“We know there are still going to be challenges ahead and Tassie is going to be a tough round for us.

“We have already got half an idea of what our challenges will be down there but every car in the pit lane has got strengths and weaknesses.”

Mostert currently leads the way for Tickford lying third in the standings ahead of team-mate Will Davison in fourth while Cameron Waters is ninth and new recruit Lee Holdsworth in 13th spot.

The Tyrepower Tasmania SuperSprint is scheduled for April 5-7.