McLaughlin hits back in Race 6 at Albert Park

McLaughlin hits back in Race 6 at Albert Park 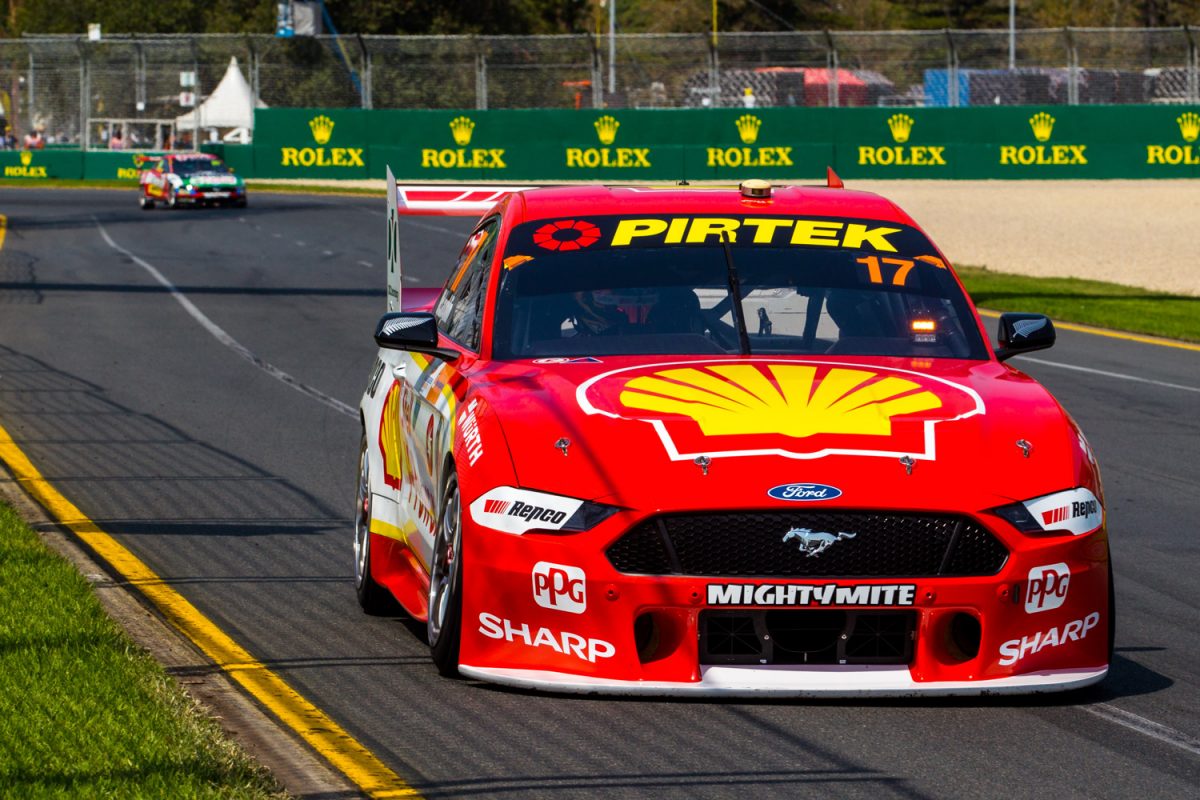 Scott McLaughlin has picked up his fifth win of 2019 in lights-to-flag fashion in Race 6 of the Virgin Australia Supercars Championship at Albert Park.

The Shell V-Power Racing Team driver, who scored zero points after a bizarre out lap crash in the preceding race of the Beaurepaires Melbourne 400, got Armor All Pole-sitter Chaz Mostert on the run to the first corner and never looked back despite a mid-race Safety Car.

Mostert and Jamie Whincup rounded out the podium after the former re-passed the latter, while Shane van Gisbergen was officially classified 22nd after copping a penalty for a hit with Fabian Coulthard in a messy opening two laps.

McLaughlin got a better start from second on the staggered grid and Mostert ended up wide at Turn 1 when he braked later on the outside of the #17 Mustang.

That allowed Whincup to take second position from the Supercheap Auto Mustang on exit, while Cameron Waters was fourth and Will Davison fifth.

Van Gisbergen had a shocking opening to the race, first dropping two positions on Lap 1 when he kicked sideways on the grass exiting Turn 5 while attacking Davison.

On Lap 2, he and Coulthard banged together after the former got alongside into Turn 11, then sent his compatriot up the Turn 13 run-off when he had a big lock-up and bumped the #12 DJR Team Penske Mustang side-to-side.

The following pack swamped the #97 Triple Eight ZB Commodore and contact with Lee Holdsworth saw van Gisbergen off the road at Turn 15.

Up the front, Mostert made a textbook pass on Whincup at Turn 3 on Lap 3, and the lone Holden man in the top five was soon under pressure from Waters.

There was a reprieve when the Safety Car was called on Lap 4, which wiped out McLaughlin’s two-second lead, as a result of Macauley Jones (CoolDrive ZB Commodore) shunting the wall after he tangled with fellow rookie Garry Jacobson (Rabble.Club Nissan Altima)exiting Turn 13.

The incident, which came as Jones was looking for a move on 19th-placed Simona De Silvestro, has gone to a post-race investigation.

McLaughlin was half a second up at the stripe when the race restarted on Lap 7, while notification that van Gisbergen would have 15 seconds added to his race time for the Coulthard incident came from race control moments later.

Van Gisbergen then elbowed his way past 13th-placed Todd Hazelwood in Matt Stone Racing’s Triple Eight-built ZB Commodore at the scene of the crime on the restart lap.

Up the front, McLaughlin crept away a little further from Mostert as they dropped Whincup (Red Bull HRT ZB Commodore), with the race running a time-certain 11 laps, two short of the scheduled distance.

“Nah. End of the day, great job from everyone. Feel like I’m nailing those starts, making me feel really good.

“Had a really good run into Turn 1 there with Chaz, and I’m just stoked for everyone at Shell V-Power Racing and Ford Performance. Just a great start to our year and we’ll press on.

He also shook off the loss of points in Race 5 and again dedicated a win to the people of Christchurch.

“You just can’t dwell on it, you’ve got to focus and you’ve just got to get on with things.

“Like I said before, there’s a lot worse things happening in the world. This is a little blip on our radar and we’ll just push on.

“Again, everyone in New Zealand, this us for you, and we’ll enjoy that New Zealand national anthem.”

Van Gisbergen took the chequered flag in 13th but ended up second-last finisher once his penalty was added.

Andre Heimgartner again showed the way for the Kelly Racing Nissans in 14th in the Plus Fitness Altima, one position ahead of Coulthard.

De Silvestro (Harvey Norman Altima) seized 17th from James Golding (Boost Mobile ZB Commodore) with a bold final corner move which saw the latter slap the concrete wall and lose another position to Jacobson by the time they made the control line.

McLaughlin has 500 points out of a possible 600 to date which puts him 31 clear of Whincup at the top of the standings while Mostert, who wins the Larry Perkins Trophy for the highest score at the Formula 1 Rolex Australian Grand Prix, is third in the standings.

The next event is the Tyrepower Tasmania SuperSprint at Symmons Plains International Raceway on April 5-7.