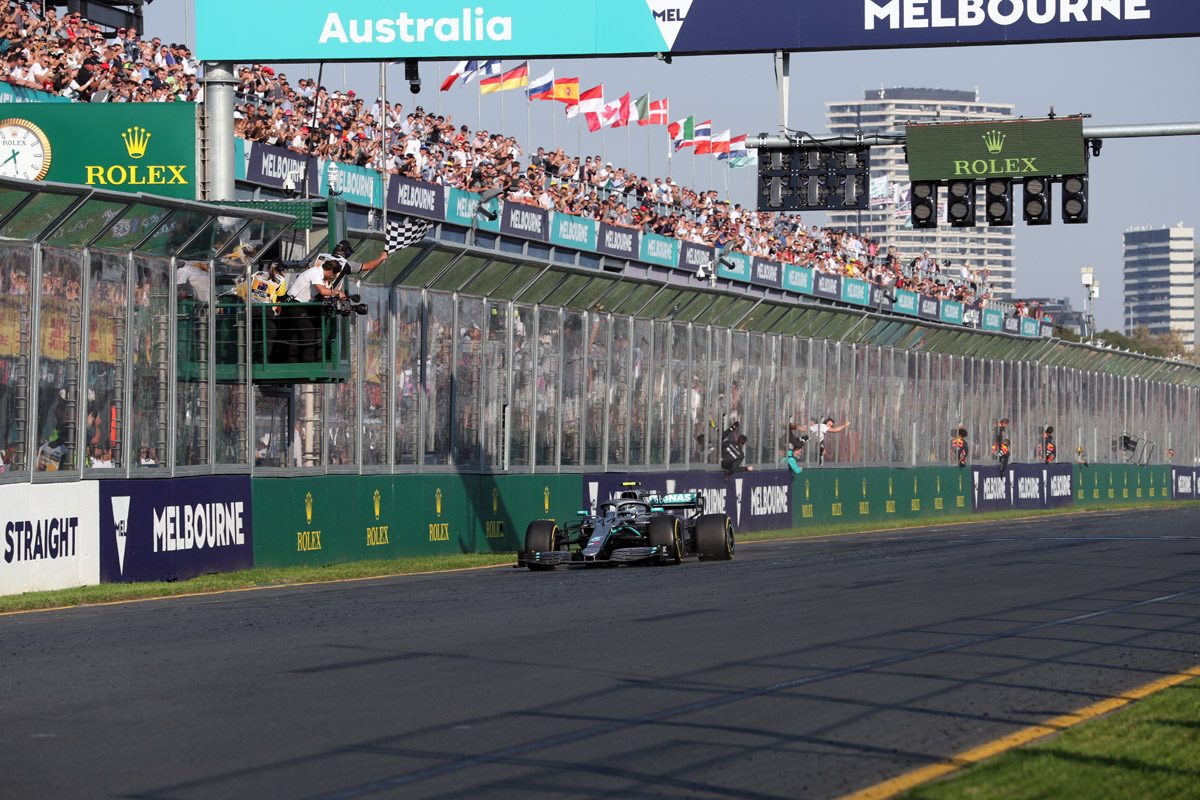 A dominant performance from Valtteri Bottas has handed the Finn victory in the Australian Grand Prix while Daniel Ricciardo failed to make the flag.

Starting from second, a strong start saw Bottas move into the lead at the opening corner with Hamilton slotting into second place.

Aside from the pit stop sequence, that was the way the pair ran throughout the race, with Bottas easing clear of Hamilton and the rest of his chasing pack.

“It was definitely my best race ever,” Bottas enthused after the race.

“I don’t know what happened, I just felt so good, everything was under control. The car was so good today, so truly enjoyable.”

Ricciardo’s race was effectively over before it reached the first corner, the Australian hoisting the white flag after 31 laps spent running at the bottom end of the timing screens.

He had been crowded to the side of the road off the start, bouncing over the grass and ripping the front wing off his Renault as he was squeezed for space as the field accelerated away.

Limping his Renault back to the pits, he continued to circulate until finally calling it a day on Lap 31.

Strategically, Ferrari was the first to blink as it boxed Sebastian Vettel on Lap 14.

Mercedes covered the next time around, bringing in Hamilton and swapping his soft compound tyres for a set of mediums for the run to the flag.

Stopping 11 laps later, Max Verstappen put on a charge in the latter stages which saw him move through on Vettel for third before closing on Hamilton in second place.

The Mercedes driver was able to react, holding Verstappen at bay to the tune of a second for much of the race, before the Dutchman ran off the road as the race began to enter the closing stages.

Struggling for pace, Vettel fell back into the grasp of Leclerc as the two Ferraris, both well over half a minute behind Bottas, ran line astern with its new signing not challenging his team leader.

Three drivers failed to reach the flag, Ricciardo pulling his car into the garage while Romain Grosjean pulled his Haas off the track with broken suspension.

Carlos Sainz was the race’s other retirement, with fire in the back of the McLaren as he climbed clear at pit entry.

In the final laps attention turned to the fastest lap, with Bottas, Hamilton, Verstappen and Leclerc seemingly battling over the bonus point.

Bottas won that scrap, taking his score to 26 points in a race he won by a comfortable 20.8 seconds over his five-time world champion team-mate.

Such was his pace that only the first six cars ended the race on the lead lap, with 17 cars classified at the finish; the Williams of Robert Kubica the last classified finisher three laps down on Bottas.

Formula 1 next moves to Bahrain Grand Prix for Round 2 of the season on March 29-31.