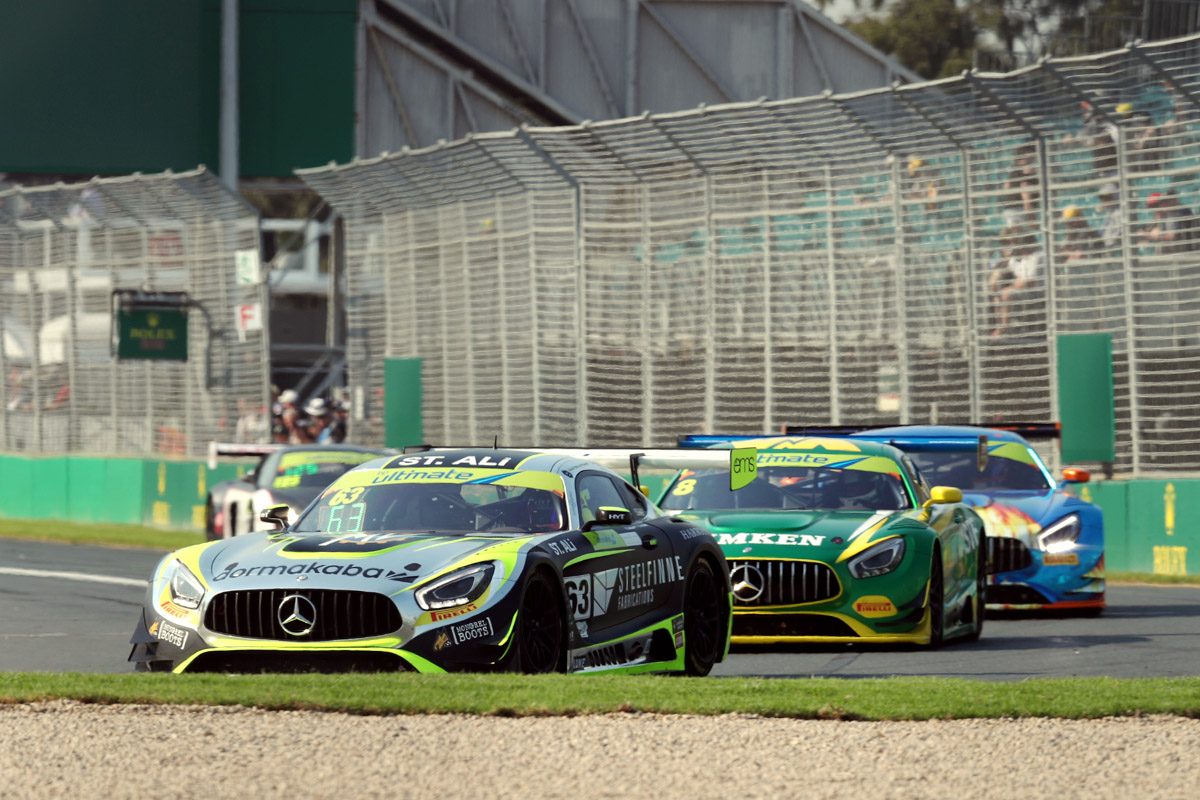 Peter Hackett won the third Australian GT race of the weekend at the Formula 1 Rolex Australian Grand Prix after an opportunistic move in traffic saw him steal victory from Max Twigg.

Twigg controlled the early stages before being caught out in the final laps by lapped traffic, affording Hackett the opportunity to sneak through into the lead.

An incident on the opening lap accounted for Scott Taylor, the Queenslander pulling his Porsche off midway around the Albert Park circuit with smoke coming from the left-front.

Contact between Nick Kelly and Tony Bates left the latter pointing the wrong way at Turn 3 while Kelly sustained steering damage and was forced to park his Audi R8 LMS Ultra.

A lap later, Lee Patridge and Tony Quinn came together at the same corner, pitching the latter’s Aston into a spin and burying the rear wheels in the gravel.

It triggered the Safety Car, while Partridge continued for another corner before straight-lining with steering issues at Turn 5 and clouting the tyres.

At the restart Twigg again leapt clear, while Habul moved through on Ryan How after clawing his way up from the back of the grid.

Traffic allowed Hackett to find a way through on Twigg on the penultimate lap, while further back Dale Paterson baulked Emery which allowed Habul and How to scamper through.

The final Australian GT race of the weekend starts at 1140 AEDT on Sunday morning. 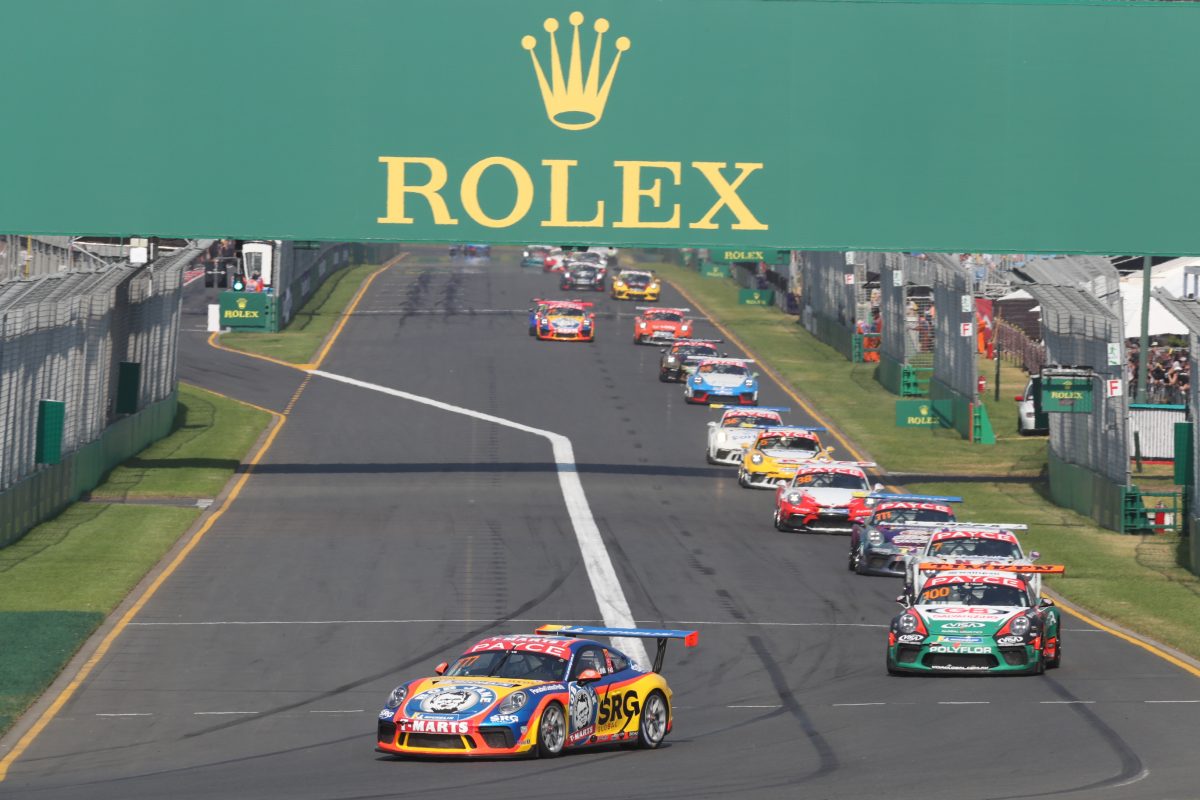 Dale Wood got a slow start off the front row which allowed Love to pounce down the inside at the opening corner for the lead.

Marc Cini was turned around in the middle of the pack but managed to get going again.

Cooper Murray moved by Thomas Maxwell for sixth at Turn 11 on Lap 2 after the pair ran side-by-side, and they would continue in those positions until the end.

At half distance, Liam Talbot pitted from the lead of Pro-Am, handing off the top spot to Tim Miles after the New Zealander previously got past Sam Shahin.

Cameron Hill lost fourth position to David Wall at Turn 13 after the former took the shortcut at Turn 12.

A wild moment for Miles on the exit of Turn 12 then saw Roger Lago take over the Pro-Am lead and ultimately finish there in 14th outright.

Love crossed the line 0.7s ahead of Wood for his first win of the season, as Warren Luff, Wall and Hill completed the top five.

Race 4 for Carrera Cup Australia begins on Sunday at 1255 AEDT. 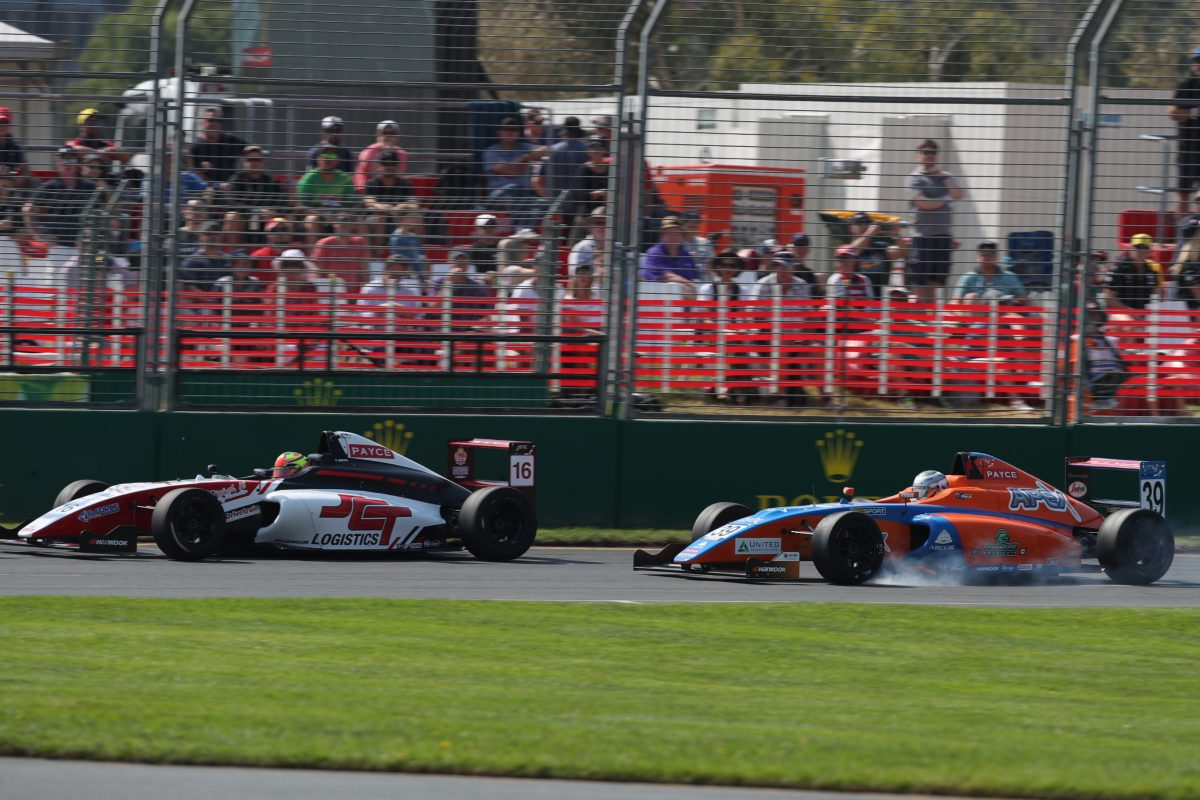 Antonio Astuti snatched victory away from Thomas Smith in the second race of the weekend for the CAMS Payce Australian Formula 4 Championship.

Ryan Yardley ran wide at the first corner and allowed Smith through to take an early lead.

Jayden Ojeda locked up and caused a melee at Turn 3, spinning Ryan Suhle around while Matt Holmes was caught up in the incident and Ojeda found himself in the gravel, resulting in a Safety Car.

On the Lap 3 restart, Josh Smith spun in front of the pack at Turn 1 after dropping a wheel in the grass, hitting the inside fence while Jackson Burton jumped on the brakes in avoidance.

This brought out a second Safety Car intervention, with Thomas Smith leading Astuti back to green flag racing on what would be the fifth and final lap.

Astuti dive-bombed Smith at Turn 15 to grab the victory, as Yardley and Taylor Cockerton beat Smith to the flag and Lochie Hughes completed the top five.

The final race of the weekend for Formula 4 will be on Sunday at 1220 AEDT.