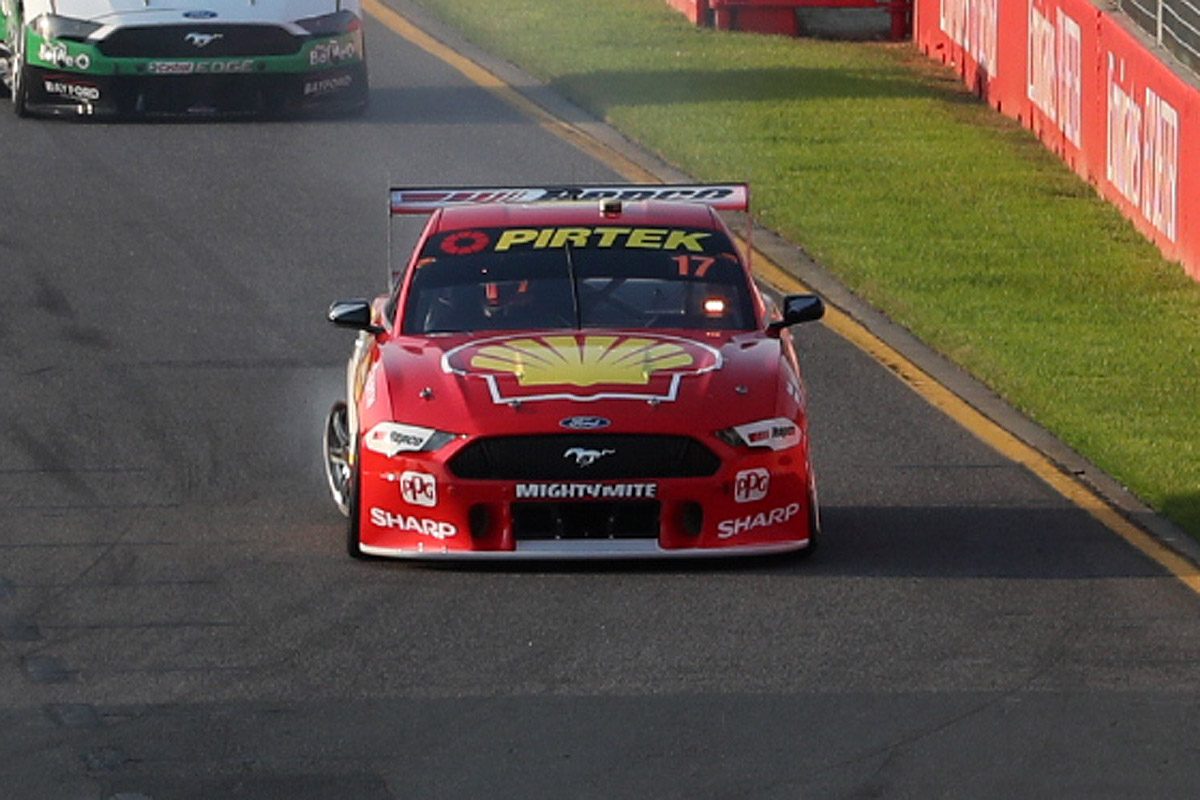 Scott McLaughlin with damage on his way to the grid

Scott McLaughlin has failed to start Race 5 after a collision with fellow front row qualifier Cameron Waters on the out lap, before Chaz Mostert took victory at Albert Park.

In one of the stranger afternoons in Virgin Australia Supercars Championship history, Shane van Gisbergen was the last finisher in 22nd after his Red Bull HRT ZB Commodore spat its right-rear wheel off while he was running ninth with five-and-a-half laps to run.

McLaughlin and Waters came together exiting the Lakeside Stadium car park as they drove from pit lane to the grid, robbing the former of a chance to extend his four from four start to the 2019 Virgin Australia Supercars Championship.

While television footage did not catch the critical incident clearly, replays showed McLaughlin arriving at Turn 6, one corner later, with damage to the right-rear corner of the #17 Shell V-Power Mustang.

His car and the #6 Monster Energy Mustang of Waters, which had damage to the left-front corner, returned to the pits as the rest of the field formed up on the starting grid.

Speaking shortly after getting out of his car, Waters explained that he was trying to follow Mostert past McLaughlin when the hit occurred.

“Just kind of following Chazzie to get to the front just so the boys (crew) have a bit more time to bleed tyres (on the grid),” he explained.

“I was passing a few guys and then out of (Turn) 5 I kind of stayed hard right to try and pass Scotty and I thought he’d seen me and he went hard left.

“I went to go and he went hard right. Just clipped his back wheel. It was just shit.”

When asked if he was taking blame, Waters claimed that McLaughlin was at least partially culpable.

“To be completely honest, I was hard right, I was on the edge of the track,” he reiterated.

“When you think a car has seen you and going straight, you don’t know where else to go.

“I’m not taking the full responsibility for that; that shouldn’t happen.”

McLaughlin, on the other hand, believed that responsibility lay entirely with Waters.

“I’m gutted more so for our fans, our sponsors Shell V-Power, our team, my guys.

“(I was) Just driving around to the grid warming up my tyres like I have all weekend.

“Those guys (Tickford) come out blazing all the time. I understand they need to get to the grid, I just had no idea he was there.

“I was just doing my normal thing and then all of a sudden ‘whack’. What do you do? I just tried to report as much of the damage as I could to the boys. Is what it is, what do you do?

“Certainly don’t think it’s (the blame) on myself. I’m the car in front, he’s got vision on me.

“I was doing exactly what I was doing at all the other corners, doing my procedure.

“Hey, I haven’t seen the vision from his car yet, but for me at the moment where I stand, I would be expecting an apology.”

The calamity left two Brad Jones Racing cars at the head of the field with Nick Percat (Freightliner ZB Commodore) effectively on pole and Slade alongside.

Slade, however, got the jump on his team-mate as Whincup made a good getaway from sixth on the grid, which had become fourth for all intents and purposes.

The 2017 champion slotted in behind Slade and was all over Car #14 until he dived at Turn 13 and snatched the lead.

What started so well for BJR saw Percat off the road at Turn 15 before the first lap was out when he and Slade made contact due to the aggravation caused by the big Whincup move.

Mostert quickly got by Fabian Coulthard (DJR Team Penske Mustang) and then David Reynolds (Penrite ZB Commodore) to take up third position on Lap 4, but could find no way past Slade.

He and Coulthard were the first of the front-runners to take their compulsory pit stops at the end of Lap 10, while Whincup and Reynolds were into the lane a lap later.

There was around a second between Whincup and Mostert when the former rejoined, while Slade emerged about five seconds behind #55 when he emerged from his own CPS after 13 laps.

Mostert passed Whincup for the effective lead at Turn 3 on Lap 14, and that looked to be that.

However, there was more drama when van Gisbergen, who was late to make his CPS and by now circulating ninth on merit, lost a wheel as he rounded Turn 9 on Lap 19.

The Safety Car was called on Lap 20, compressing the field, but Mostert was allowed to scamper clear when the race restarted with four laps to go.

Whincup’s poor restart saw him come under pressure in the laps which remained but he managed to hang on, finishing second to Mostert by 1.2112s after 25 laps, with Slade 0.6964s further back.

“Really love this track and the boys gave me a great car,” said Mostert.

“Big thanks to Addsy (engineer Adam de Borre). The boys were really quick in pit lane too, can’t thank them enough.

On attacking Whincup, he said, “I really used the warm tyre to my advantage; I noticed he was still trying to get it up.

“I felt like I was just one lap in front of him where my tyre was at. I really picked the best spot that I could, just got him.

“Like the first stint, when you’re behind Slade and J-Dub the car in front is the quicker one.

“Didn’t really have much for them in the first stint, but really happy to get the pass done and the win for the boys.”

Van Gisbergen needed a second extra pit stop as he took the chequered flag two laps off the pace.

McLaughlin’s championship lead has been cut from 116 points to 24, with Whincup still second and Mostert another 35 points back in third.

Race 6, a 13-lapper with no CPS, completed the Supercars program tomorrow at 1335 local time/AEDT.