McLaughlin holds no grudge after Waters out lap crash

McLaughlin holds no grudge after Waters out lap crash 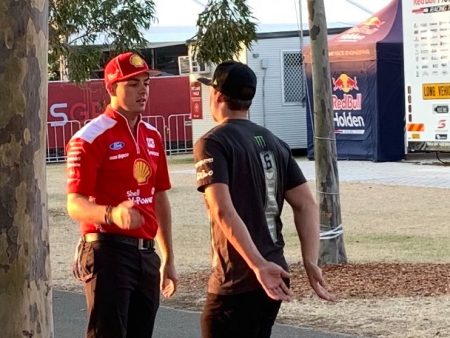 Scott McLaughlin says he does not hold a grudge with Cam Waters despite the pair making contact in a bizarre out lap crash which left them both unable to start Race 5 of the Virgin Australia Supercars Championship.

The two front-row sitters came together as they toured the Albert Park circuit to the grid from the pits.

Out of Turn 5, Waters attempted to move by McLaughlin in his efforts to get to the pits quickly.

“I went hard right to pass him because I wanted to be on the grid to bleed the tyres,” Waters told Speedcafe.com.

“I’ve got on the throttle to pass him and he’s turned hard right to start warming his tyres.

“I don’t think anyone actually is truly to blame,” he added.

McLaughlin, who’d won the opening four races of the season and was set to start from Armor All Pole Position, admitted he hadn’t seen Waters.

“He came and said sorry for his part; I haven’t seen the incident, I just got a massive whack.

“There was nothing to be heated about. What’s the point of getting angry with the guy,” he added.

“I was angry for everyone in the team and not being in the chance to have a crack with a fast car.

“He ruined his own race as well. Just move on. I’m not that type of person to hold a grudge over that.

“Like I said, everyone is human, we race humans and humans make mistakes.”

Despite failing to make the start of the race, McLaughlin still holds the championship lead by 24 points over Whincup while race winner Mostert third a further 35 points back.

The final race of the Melbourne 400 weekend takes place at 1335 AEDT tomorrow with McLaughlin set to start from second and Waters fourth.

UPDATE: It has since been confirmed by the championship’s official website that the incident is under investigation.