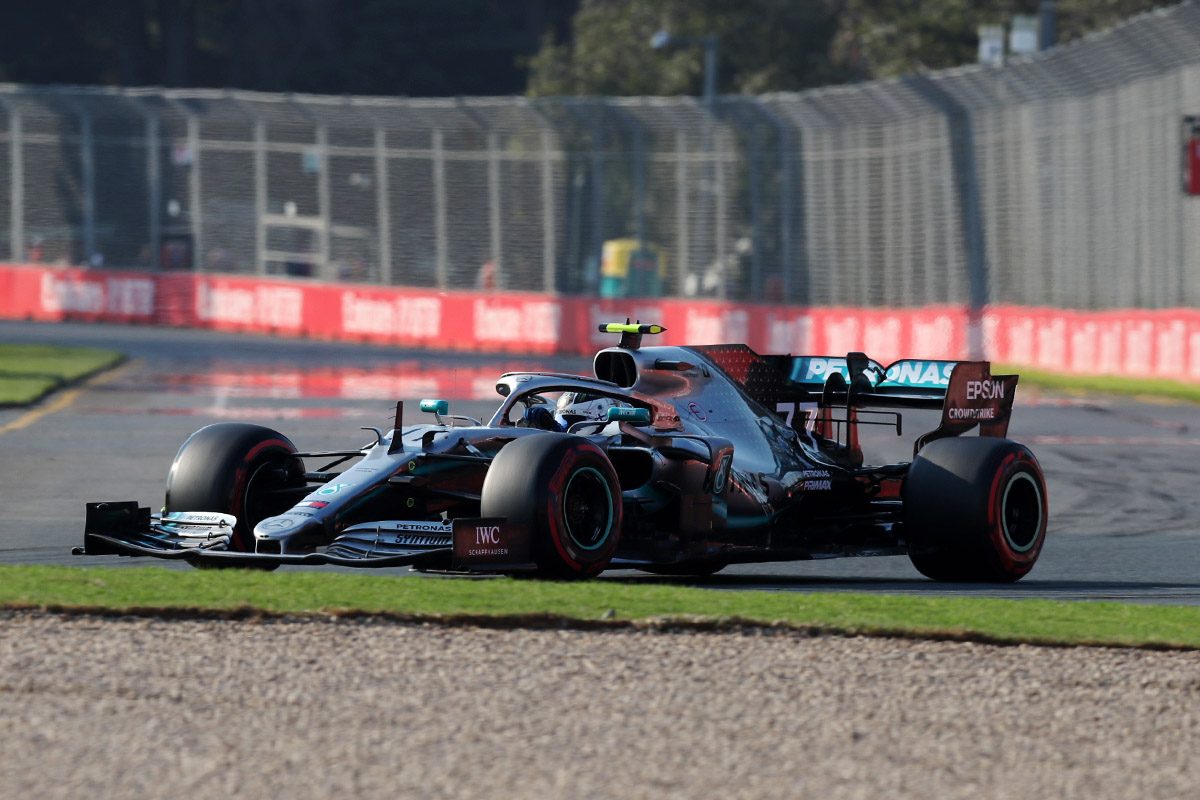 Lewis Hamilton led a front row lock out for Mercedes for the Formula 1 Rolex Australian Grand Prix in a session which saw Daniel Ricciardo miss the cut from qualifying’s second phase.

Bottas scorched his way around the Albert Park circuit to set the fastest time ever recorded around the venue, his 1:20.598 easily good enough for provisional pole.

Hamilton had been the previous high water mark at 1:21.055 to briefly hold top spot, while Vettel’s best effort mustered no better than 1:21.250 to slot straight into third.

The 2018 champ had a second bite with a late effort that saw him stop the clock at 1:20.486s to bump Bottas off the provisional pole.

Half a lap behind Hamilton on track, Bottas fell a tenth of a second short of reclaiming pole, handing Mercedes a front row lock out.

“Coming from testing, from winter, we had no idea where we would be,” Hamilton said.

“Valtteri did an exceptional job out there, it was very close.”

The Mercedes pair were more than half a second clear of Vettel who locked out third place, with a late lap from Max Verstappen moving him into fourth ahead of Charles Leclerc.

Then came the Haas pair of Romain Grosjean and Kevin Magnussen, with the impressive rookie Lando Norris in eighth.

Kimi Raikkonen put his Alfa Romeo on ninth, with Sergio Perez rounding out the 10.

Falling victim of the cut at the end of Qualifying 2, Ricciardo was the highest profile elimination, missing out by 0.040s.

He was joined by his Renault team-mate Nico Hulkenberg, who was only 0.008s faster than the Australian leaving the pair in 11th and 12th for Sunday’s race.

“I knew it was going to be close but I did believe we’d have the pace for Q3 and I think we did,” said Ricciardo.

“I don’t know how deep we could have got into that top 10 but I was just half a tenth to get into Q3 and I know that was there, that was in the car, and I actually lost it in the first sector, I was down a bit, close to a tenth there, so that alone I was more frustrated with myself because I knew it was there in the car.”

Vettel made the grade by six tenths, though could easily have been left on the sidelines after bouncing over the gravel and grass on the outside of Turn 12.

A final flurry in the first phase of the session produced a number of surprises, including Charles Leclerc fastest and Alfa Romeo’s Antonio Giovinazzi fourth quickest.

At the other end of town both Williams drivers fell victim of the cut, so too did McLaren’s Carlos Sainz, Red Bull’s Pierre Gasly, and Lance Stroll.

George Russell was 1.3 seconds slower than Sainz, with Robert Kubica another 1.7s further back after a light brush with the wall.

Sainz was a victim of Kubica’s brush with the wall, the Williams struggling with a puncture baulking the Spaniard.