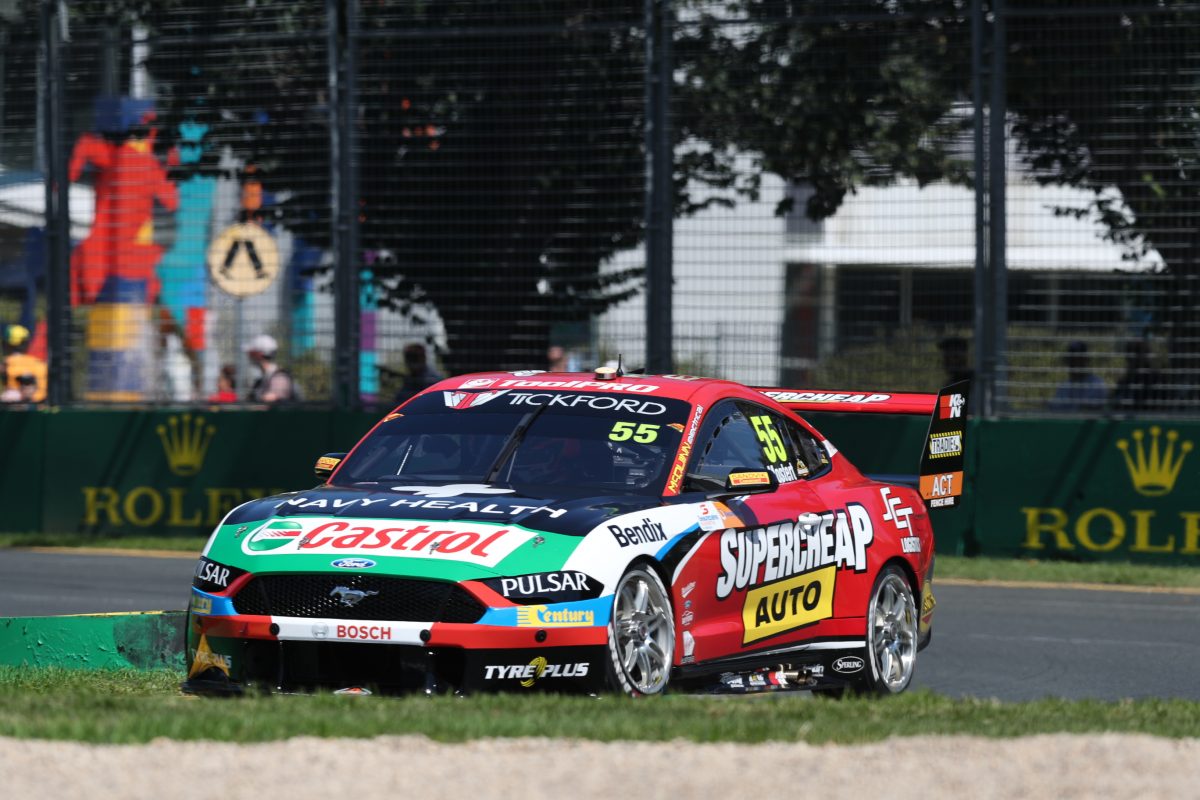 Chaz Mostert has finally broken Scott McLaughlin’s streak of Armor All Pole Positions at Albert Park, but only after the Kiwi picked up the 50th of his Supercars Championship career.

McLaughlin was again without peer in Qualifying for Race 5 of the season at the Beaurepaires Melbourne 400, which he topped by more than half a second, but Mostert bided his time before usurping the #17 Mustang by less than a tenth of a second in the latter 10-minute qualifying session of the day.

The Red Bull Holden Racing Team’s Shane van Gisbergen could only manage 13th on the grid for Race 5, while all six Ford Mustangs made the top 10 for Race 6.

Armor All Qualifying for Race 5

The effort left the #17 Shell V-Power Mustang 0.5224s clear of the field for his third pole of the weekend, with Cameron Waters best of the rest in the Monster Energy Tickford Mustang.

Van Gisbergen, however, will start only 13th after losing the rear end under brakes and running up the Turn 15 run-off on his second run.

He had sat only 12th after the first runs and looked like only gaining a handful of positions before the moment on a last-ditch effort in the #97 ZB Commodore.

Tim Slade (Alliance Truck Parts ZB Commodore), on the other hand, jumped from 21st on the timesheets to take third on the grid, having pitted at the end of what would have been his first flyer.

Richie Stanaway salvaged 16th after an early off in his Boost Mobile ZB Commodore, one position behind team-mate James Golding.

Fastest Nissan driver was Andre Heimgartner in 17th in the Plus Fitness Altima.

Armor All Qualifying for Race 6

McLaughlin again put himself at the top of the totem pole in the early minutes of Qualifying for Race 6, more than a quarter of a second faster than Whincup in second position.

Neither team-mate Coulthard nor van Gisbergen bothered to complete their first flyers and instead came straight into the pit lane, while Mostert waited for longer to start his only run at the session.

Mostert therefore sat at the very foot of the timing screen before he rolled out a 1:54.2783s which bettered McLaughlin’s time by 0.0872s.

However, with Race 6 only a 13-lapper for 50 points, the Tickford driver nevertheless lamented poorer qualifying efforts for the two longer races of the weekend, including 22nd fastest for Race 3.

“Adam (de Borre, engineer) kind of picked it up. We’re kind of starting two races this weekend where the points don’t matter so much at the pointy end but we’ve got some work to do in the longer races,” said Mostert.

“The car’s felt pretty good here through the weekend; bad credit to me, I just haven’t been very consistent this weekend, just making small little errors and when there’s so much on the line with one lap it can really cost you in qualifying.

“Hopefully in the race we can find a groove, come up a few in the other races and try to capitalise on the races we started at the front.”

McLaughlin was looking at the positives despite a relatively subpar showing in the final qualifying session of the weekend.

“First sector, I lost a chunk of time there,” he conceded.

“Man, that’s the hardest qualifying of the year I feel because it’s just one lap.

“It would have been cool to go four up, but congrats to Chaz and his team, they did a great job.

“Us at Shell V-Power Racing, I think we’ve got a great car for the races as well, and we start from the pole three times.”

Whincup and Waters were again prominent in third and fourth respectively, while van Gisbergen salvaged fifth when he did put a whole lap together.

The rest of the top 10 was Will Davison (Milwaukee Mustang), Mark Winterbottom (Irwin Tools ZB Commodore), Coulthard, Slade, and Lee Holdsworth (The Bottle-O Racing) in the sixth and final Mustang.

Reynolds ended up 12th while Rick Kelly was the leading Altima as he took 18th in the Castrol Racing entry.

Results: Armor All Qualifying for Race 5

Results: Armor All Qualifying for Race 6