Tributes flow in for Charlie Whiting

Tributes flow in for Charlie Whiting 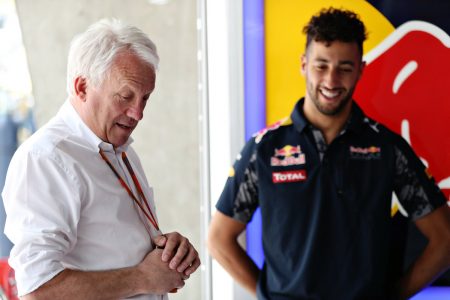 Tributes from across the motorsport world have flowed in for Formula 1 Race Director Charlie Whiting, who died unexpectedly in Melbourne a day before the 2019 season commenced.

Whiting had been F1’s Race Director since 1997, having joined the sport’s governing body in the late 1980s.

That followed stints at Hesketh and then Brabham, the latter with which he oversaw championship wins in 1981 and 1983 with Nelson Piquet.

The Englishman played a key role in the sport, and was instrumental in formulating the sport’s technical regulations.

“I have known Charlie for all of my racing life. We worked as mechanics together, became friends and spent so much time together at race tracks across the world,” said Formula 1’s Managing Director of Motorsport, Ross Brawn.

“I was filled with immense sadness when I heard the tragic news. I’m devastated.

“It is a great loss not only for me personally but also the entire Formula 1 family, the FIA and motorsport as a whole. All our thoughts go out to his family.”

Brawn was just one of those sharing messages of condolence following Whiting’s death, with the F1 paddock and others across the motorsport community taking to social media to express their sadness over the loss.

Sad times with the passing of Charlie Whiting. You’ll be missed matey.😔 pic.twitter.com/Ij74m584GG

We are filled with immense shock and sadness at the news of Charlie Whiting’s passing.

He will be remembered as a giant of the sport, as well as a dear friend to so many.

Our deepest sympathies and thoughts are with his friends and family.https://t.co/36pAcjjZOy

We are terribly saddened to hear of Charlie Whiting’s passing. Charlie was a true legend of the sport and will be greatly missed. Everyone’s thoughts at Williams are with his family and friends at this difficult time. pic.twitter.com/rWBjYuank9

All at McLaren are shocked and deeply saddened at the news of Charlie Whiting’s passing. Charlie will be remembered as one of the giants of our sport, as well as a great colleague. Our deepest sympathies and thoughts are with all of his loved ones. pic.twitter.com/DmrSZAT4Cc

We are deeply saddened to hear of our friend Charlie Whiting’s passing.

We send our condolences to his family at this difficult time. The entire motorsport community is in mourning. https://t.co/VlnvFVMxkh

I think everyone is the paddock is gonna miss Charlie. Very sad news to all of us. Thoughts to his family and friends. Thanks for all you’ve done for our sport… #RestInPeace https://t.co/q95mwmBZYz

Scuderia Toro Rosso is deeply saddened to hear the news Charlie Whiting, FIA Director of Formula One, has passed away.

The team sends its condolences to his family and friends at this difficult time. Charlie will be sorely missed by many in the Motorsport community

So sad to hear the Charlie Whiting has died. A lovely man who was an integral part of F1, he’ll be greatly missed by the sport and especially by his many friends.

Very sad and surreal news ahead the Australian GP. Can’t believe it..
My thoughts are with the family and friends.
He’s done so much for the sport we love.

Renault Sport Racing was shocked and saddened to hear of the sudden passing of Charlie Whiting. Charlie was one of the pillars and leaders of the sport. His drive to ensure exciting, safe and fair racing was unparalleled and his passion will be sorely missed. Our thoughts are with his family and friends at this time. The sport will unite to continue his legacy, not just this weekend, but well into the future.

Very sad news today with the passing of Charlie. He was a true @F1 lover and key figure of our sport. I’ll miss meeting and talking to him at races. He was always listening to the drivers and looking after our safety. He will be greatly missed.
All my thoughts to his family 🙏 pic.twitter.com/lflW2fhYiM

Toto Wolff: “I was shocked and saddened to hear the news of Charlie’s passing this morning. He was a pillar of our Formula One family – balanced in his approach, subtle in his understanding and always with the interests of Formula One as his main focus. pic.twitter.com/20XQLhm1Op