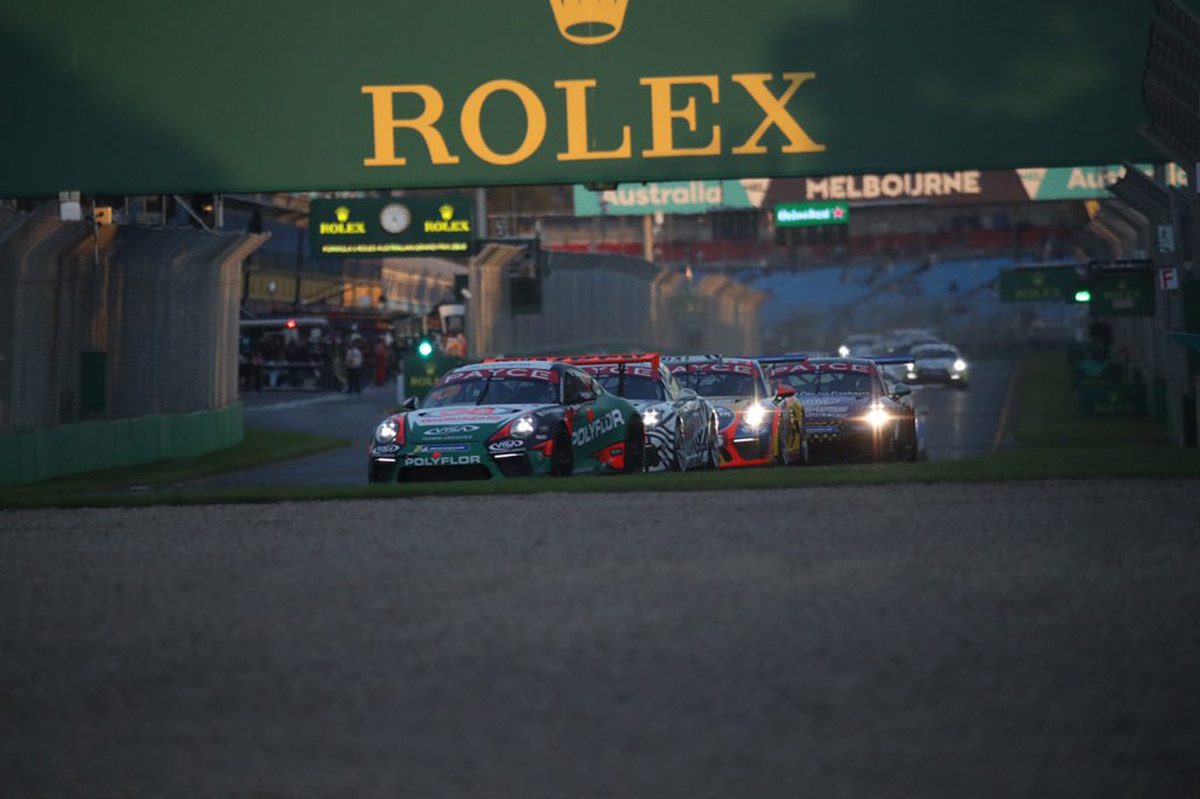 Wood headed the field throughout the shortened race to lead Dylan O’Keeffe and Jordan Love to the line.

Michael Almond picked up damage to the front right which ended his race on the opening lap, before the Safety Car was called for a three-car clash at Turn 14 a lap later.

Steve Richards and Josh Hunt were eliminated in the tangle as they battled it the back half of the top 10.

Joey Mawson was also involved in the Richards/Hunt clash, but was able to carry on at the back of the pack before climbing to 17th at the flag.

Carrera Cup’s second race of the weekend takes place at 1455 on Friday afternoon. Fraser Ross has won the opening Australian GT Championship race of the weekend after an entertaining and occasionally bruising three-way scrap for the lead.

The victory handed the McLaren 720S GT3 its first win in Australian GT competition, though a delay with the homologation paperwork from the FIA has left the car an Invitational entry and not eligible for championship points.

Second across the line was Max Twigg, who led until the penultimate lap, with Peter Hackett a distant third.

A moment for the McLaren saw Ross brush the wall on the exit of the final turn in the early stages, before kicking up the dirt off the back of the kerb at the fast Turn 5 just two laps later.

Things came to a head with Habul when a strong run on the approach to Turn 3 saw Ross send it up the inside of the SunEnergy1 Mercedes, who attempted to close the door once Ross was already alongside.

It left the Mercedes with a right rear puncture, dropping him out of contention and releasing Ross to pursue Twigg ahead.

Repeating the move that saw him take second from Habul, Ross claimed the lead just a lap later before opening a 2.2 second advantage to win the opening race of the weekend.

Australian GT’s second race of the weekend is at 1015 AEDT on Friday morning. Luis Leeds pinched Castrol Pole Position from Jayden Ojeda by 0.0066s right at the end of qualifying for the first round of the CAMS Payce Australian Formula 4 Championship.

After a cat and mouse game over track position, Ojeda led SuperService-backed Leeds across the control line for what would be their final laps.

However, the 2018 champion opted to ease off the throttle in order to prevent the latter from benefiting from a tow.

Leeds still managed to clock a 2:02.1251s which pipped his AGI Sport stable-mate by less than a hundredth of a second with the chequered flag out.

Team BRM’s Ryan Suhle, who was also initially involved in the fight for pole, ended up third by 0.4061s, ahead of Lochie Hughes (Team BRM) and Antonio Astuti (AGI Sport).

Tomorrow sees the first of three F4 races this weekend from 1055 local time/AEDT.