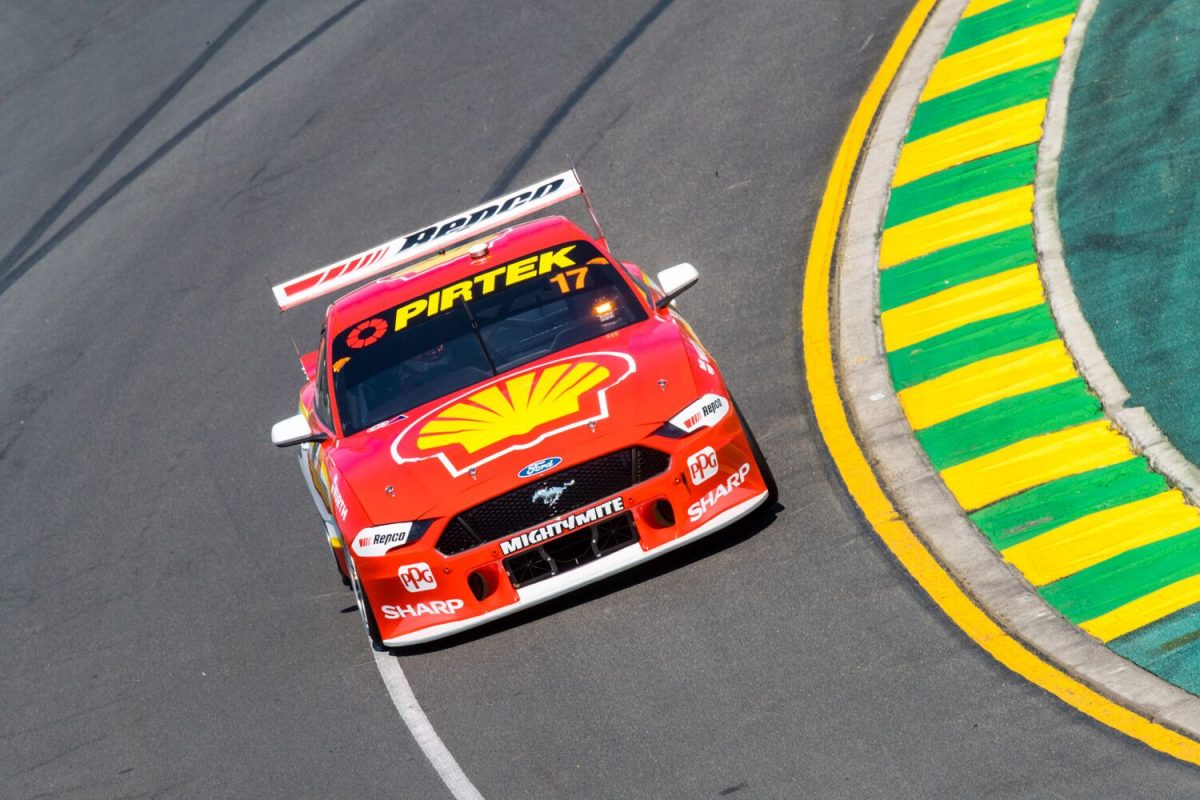 Scott McLaughlin has taken more than half a second off the Albert Park practice record in taking Armor All Pole Position for both Races 3 and 4 of the season.

McLaughlin was far and away the fastest in Qualifying for Race 3 as Fabian Coulthard made it a Shell V-Power Racing Team lockout for the first race of the weekend, while it is McLaughlin and Chaz Mostert on the front row for Race 4.

Mostert, however, is buried near the back of the field for tomorrow afternoon’s Race 3 at the Beaurepaires Melbourne 400, while Shane van Gisbergen missed the top 10 on the grid for Race 4.

Armor All Qualifying for Race 3

McLaughlin broke the old practice record by more than half a second with a 1:53.8280s on his only flyer in the first 10-minute qualifying session of the afternoon.

Coulthard, despite being 0.3614s slower than his team-mate, was also under what was his old practice/qualifying benchmark, while Cameron Waters was best of the rest at 0.2139s further away in the Monster Energy Mustang.

“You always think there’s a bit in it,” said McLaughlin shortly after the session.

“I might just grab the (Armor All Pole Position) cheque and just put it next to me and hopefully get another one on the way through.

“The Mustang’s feeling good but a little bit more to do.”

Will Davison made it a Mustang lockout of the first two rows in the Milwaukee Racing entry while van Gisbergen (Red Bull HRT ZB Commodore) was first of the Holden drivers in fifth position, 0.7145s off the pace.

Mostert is down in 22nd in the field after two mistakes in the Supercheap Auto Mustang.

He ran wide of track limits at the exit of Turn 12 on his first flyer and ran off at Turn 1 on his second after pinching a brake.

Macauley Jones (#21 CoolDrive ZB Commodore) was the only other driver to go out again for a second flyer but ended the session at the very back of the 24-car field.

Armor All Qualifying for Race 4

The latter 10-minute session was much tighter at the top with McLaughlin Mostert, and Jamie Whincup covered by less than a tenth of a second.

McLaughlin prevailed again as Mostert reached the control line with a time only 0.0128s slower.

He split the last two Virgin Australia Supercars Championship winners with Whincup 0.0788s off pole, and set to share Row 2 with Waters.

Ominously, McLaughlin was not happy with his effort.

“Driver needs a big tune-up after that second lap,” he quipped.

“I just made a mistake. It wasn’t my best lap by any means. I had a really good first sector and half a good second sector. I was lucky to hold on in that sector.

“The car’s good, but it showed it was awesome; 53.8 that first one was amazing.

“But look, stoked for everyone at Shell V-Power Racing Ford Performance. Another pole, another couple, which is nice.

When asked what he wanted more of from his car, he responded, “I need turn. I’m battling, I need a little bit of turn here and there.

Coulthard had a relatively poor first flyer but was quickly back to the pits for another set of tyres and improved by almost three tenths of a second to qualify the #12 Mustang in fifth position.

Davison made it five Mustangs in the top six, ahead of the two Penrite Racing ZB Commodores of David Reynolds and Anton De Pasquale respectively, then Slade and Winterbottom.

Van Gisbergen could only manage 11th while Lee Holdsworth was the only Mustang outside the top 10 in 12th in the Bottle-O Racing entry.

Rick Kelly (Castrol Racing) was the first of the Kelly Racing Altima drivers in 15th.

Qualifying sessions for the latter two races of the weekend will be held tomorrow from 1350 local time/AEDT, ahead of Race 3 of the season in the late afternoon at the Formula 1 Rolex Australian Grand Prix.

Results: Armor All Qualifying for Race 3

Results: Armor All Qualifying for Race 4