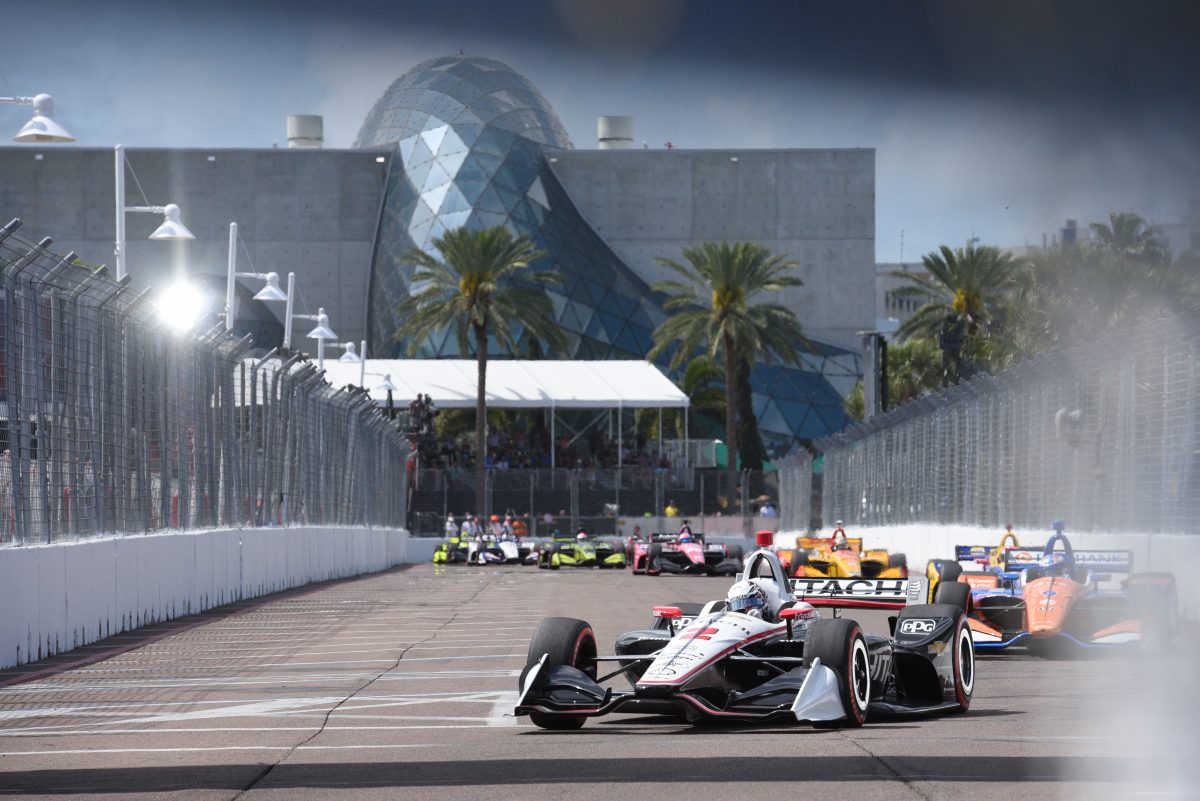 Josef Newgarden has won the first race of the 2019 IndyCar Series in St Petersburg after taking over the lead just before halfway.

Newgarden assumed the race lead on Lap 51 of 110 and maintained it when he emerged from the pits a handful of laps later to ultimately take victory by almost three seconds from Scott Dixon and pole-sitter Will Power.

Starting from the front row alongside his Team Penske team-mate, Newgarden in fact ceded second position to rookie Felix Rosenqvist and ran third all the way to the second pit stop cycle.

While those around him entered the lane, Newgarden continued to circulate until he pitted the #2 Chevrolet again on Lap 55.

When Power, who pitted on Lap 50, got delayed behind Marco Andretti (#98 Andretti-Herta w/ Marco & Curb-Agajanian Honda) in the laps following that stop, Newgarden was able to hold on to the lead while also enjoying new red tyres for his third stint.

He was nine seconds to the good, by which time Dixon was his nearest rival, when he pitted a final time and took blacks on Lap 79.

The margin between the 2017 champion and the 2018 champion fell to less than two seconds when Newgarden was also held up by Andretti in the final stages, before Car #2 took the chequered flag 2.8998s up on the field.

The Queensland-born Kiwi had in fact passed the Queenslander into Turn 1 on the same lap but couldn’t make that move stick.

Dixon was then also stuck behind Andretti, who was slightly off-sequence having pitted under an earlier Caution, for a handful of laps and later lost time behind the Carlin Chevrolets.

He couldn’t catch Newgarden but ended up almost 10 seconds clear of Power at the finish in his #9 Honda.

Power led the first 23 laps (but for the initial pit stop cycle) in Car #12 but lost the spot to Rosenqvist upon the first restart having experienced an overboost issue as he rounded the final bend.

Rosenqvist had a moment when Power just about chopped the nose off the #10 Honda as the Swede exited the pits following his second pit stop, a cycle which proved decisive in the make-up of the podium.

Sebastien Bourdais (#18 DCR w/ Vasser-Sullivan Honda), winner of the last two St Petersburg races, and Ryan Hunter-Reay (#28 Andretti Autosport Honda) were the first two out of the race due to engine problems, the latter causing the first Caution on Lap 20.

The second and final Caution came on Lap 26 when Ed Jones (#20 Ed Carpenter Racing Chevrolet) hit the wall and was glanced by Matheus Leist (#4 AJ Foyt Chevrolet) as the field filed past.

IndyCar has advised that Jones suffered “a small non-displaced fracture of the distal fourth metacarpal in his left ring finger.”

Marcus Ericsson was running 12th on debut before he succumbed to what SPM described as a water pressure issue in the #7 Honda.

Newgarden takes a 13-point series lead to Circuit of the Americas for Round 2 on March 22-24 (local time).