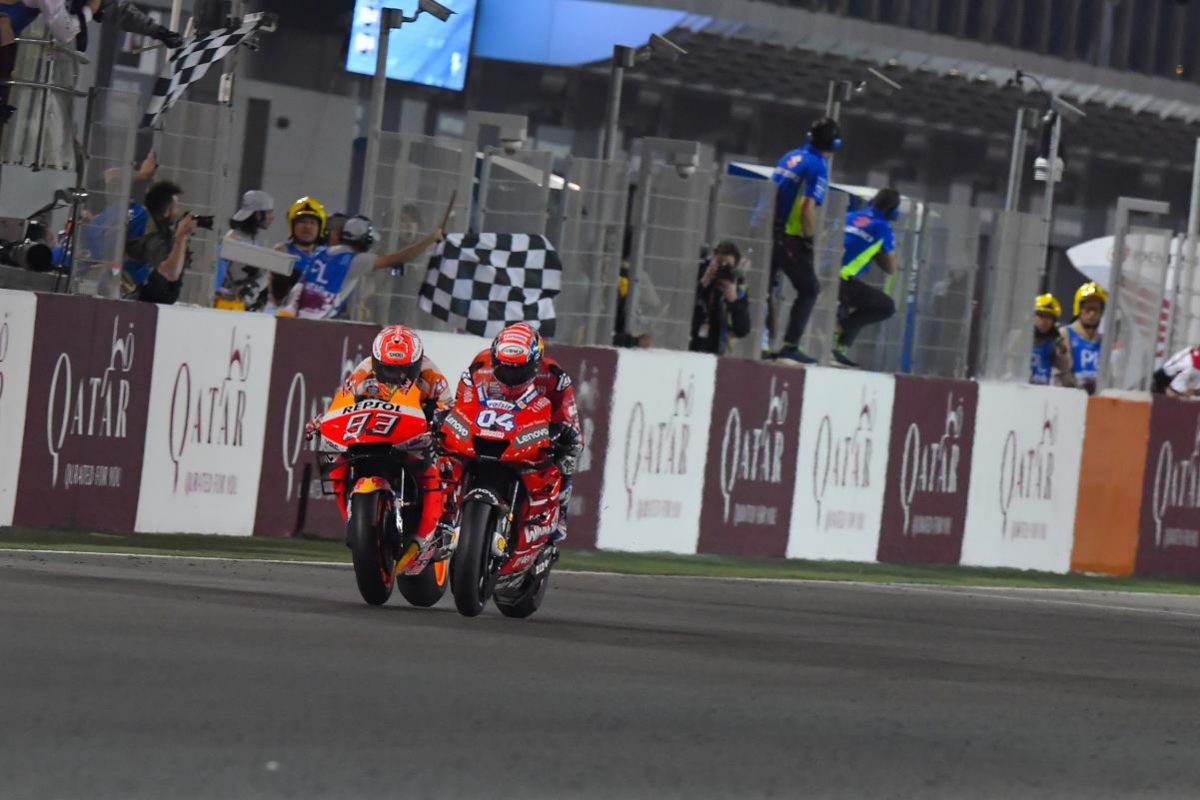 Andrea Dovizioso has beaten Marc Marquez to victory in the Qatar MotoGP by 0.023s after yet another last-corner dive by the Spaniard.

Jack Miller was one of three DNFs as a result of losing the seat pad on his Alma Pramac Ducati while running second on the second lap of the race.

Dovizioso was a constant at the head of the field and indeed led at the end of 18 of the 22 laps at the Losail International Circuit.

He took the lead into the first corner from Miller, Marquez, and Crutchlow, while Takaaki Nakagami (Idemitsu LCR Honda) quickly relieved Viñales of fifth position.

Viñales start was not especially poor but he was made to pick up the #12 Monster Energy Yamaha into Turn 1 as Marquez came down his inside, and continued to give up positions in the first three laps.

Rins was going the other way, starting 10th, ended Lap 1 in eighth, and making up two more spots on Lap 2.

He and rookie team-mate Joan Mir (Suzuki Ecstar) cleared Crutchlow on Lap 4 and that was to be the start of what was a three-way fight for victory, with other players occasionally trying to buy in but not being able to match #04, #93, or #42.

Rins was particularly strong through the back end of the circuit and made a number of moves through the triple right-handers.

He led for the first time on Lap 5 but was hamstrung by his lack of horsepower relative to Dovizioso’s Ducati and Marquez’s Honda.

First position swapped and swapped back between Rins and Dovizioso five times by the time they exited Turn 1 on Lap 11, before Danilo Petrucci (Mission Winnow Ducati) was invited into third position when Marquez put a block pass on Rins at Turn 6.

Rins reclaimed third from Petrucci on Lap 13 and quickly bridged the gap which the top two had formed.

It was an eight-bike lead group again on Lap 15, but six bikes on Lap 17 as Viñales took too long to pass Mir.

Rins passed Marquez for second at Turn 12 on Lap 16 but lost it as they opened the throttle wide on the main straight two laps later.

The Suzuki rider then ran wide at Turn 1 on Lap 20, giving up a podium place to Crutchlow.

Dovizioso handed Marquez the lead for the first time when he wobbled into Turn 4 on the second-last lap, while Rins re-passed Crutchlow at Turn 15.

However, Dovizioso powered past Marquez and Crutchlow past Rins at the start of Lap 22.

Marquez twice threw it down the inside of Dovizioso on that last lap, at Turn 10 and then Turn 16, but on each occasion he could not make the move stick.

If Crutchlow’s podium in his first start since breaking his ankle at Phillip Island in October was a surprise, Rossi finishing fifth from 14th on the grid was an even bigger one, with ‘The Doctor’ slowly making his way towards the front.

Petrucci ended up sixth, Viñales seventh, and debutant Mir eighth, with Nakagami ninth and Aleix Espargaro rounding out the top 10 on his Gresini Aprilia.

A battered Jorge Lorenzo looked like missing out on points in his first start for Repsol Honda but ended up stealing 13th from new Gresini Aprilia rider Andrea Iannone at the line, while Johann Zarco grabbed the final point on his Red Bull KTM Factory Racing debut.

Fabio Quartararo was arguably the hard luck story of the race as his Petronas SRT Yamaha failed to fire from fifth on the grid, forcing him to start his first MotoGP race in pit lane.

The Frenchman went hard early on and set what would be the fastest lap of the race on Lap 3 but took the chequered flag in 17th.

Miller wrecked his front tyre as a result of his awkward seating position and was joined in retirement by rookie team-mate Francesco Bagnaia and Aprilia test rider Bradley Smith.