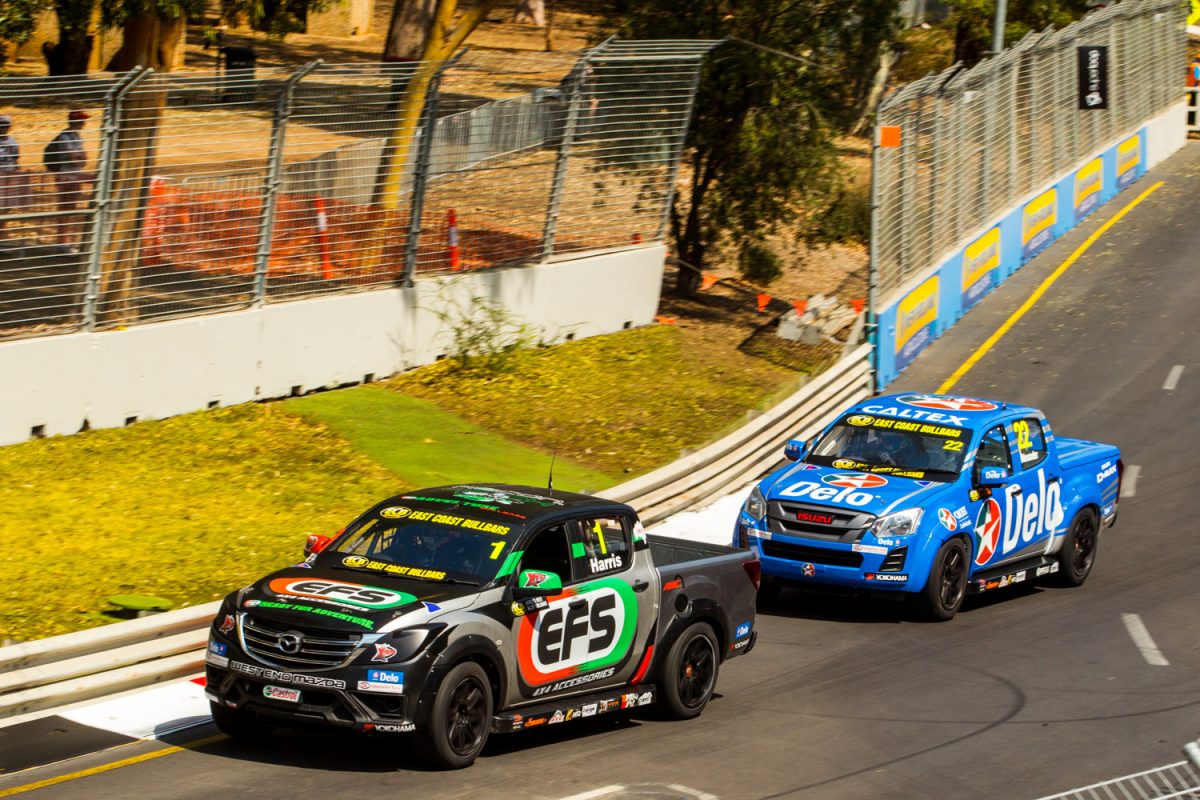 The double reverse grid format which was used for Round 1 of the ECB SuperUtes Series in Adelaide is being reviewed by category organisers.

While a part or full reverse for Race 2 has been a standard for SuperUtes and the V8 Ute Racing Series which preceded it, Race 1 last weekend also saw the Armor All Qualifying results fully reversed (but for those who failed to set a qualifying time) to determine the grid.

The format currently applies for all eight rounds of the 2019 series as per SuperUtes’ sporting regulations.

According to SuperUtes category manager Kurt Sakzewski, however, it was a response to a general request from the Superloop Adelaide 500’s promoters for more entertainment from the series, which will be reviewed before Round 2 at Barbagallo in early May.

“After our round at Adelaide last year, one of the requests from the Adelaide event was to, if we could, improve the entertainment factor,” Sakzewski told Speedcafe.com.

“Now we’ve run it at one event, we’ll have a proper review of that and we’ll see if we look at retaining that format or if we go back to something like we had like last year.”

Each of the first two races in Adelaide saw Lap 1 carnage which necessitated Safety Car periods.

In Race 1, the top five on the grid, which was headed up by two rookies, ran as many cars wide to the first corner.

While they got away with that moment largely unscathed, Christopher Formosa rolled in traffic five corners into the race, causing significant damage to three other utes including a frightening window net incident for Dean Canto. 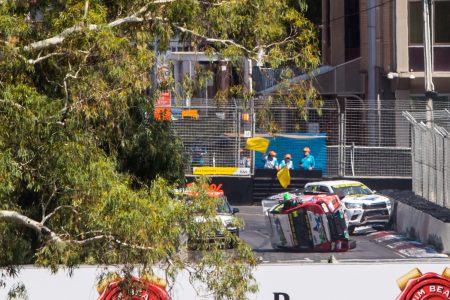 Craig Woods on his side in Race 2

Race 2 saw Craig Woods end up on his side when he ran into a tyre wall as a result of a tangle between Ben Walsh and Craig Dontas.

Ironically, the second grid reversal had actually put the series’ leading drivers back up the front of the field due to there being only half a lap of green flag racing in the opener.

There were mixed opinions on the format from some of those drivers, with Tom Alexander opposed while Ryal Harris and Craig Woods offering qualified approval of various reverse grid systems.

“I’m of the opinion that if we qualify, that’s where we should start; we shouldn’t then get reversed,” Alexander, round runner-up, told Speedcafe.com.

“I understand why they’ve done it, to try and make it more of a spectacle for the crowd, but it’s always got to end up tearing cars up; there’s too much of a speed difference and experience difference between the field.”

Harris, the round winner and 2018 series winner, wants reversals to only apply to the top 10 on the grid.

“They’ve obviously just tried to spice the racing up but the time difference between the guys that are back in 11th, 12th, 13th compared to us at the front is just too big,” he told Speedcafe.com.

“It just bottles the whole field up and the last thing we need at the moment is incidents because they just roll over.

“Maybe if it was a 30-lap race (the whole grid could be reversed), but in eight laps, it’s just crazy, and that’s why everyone drives like a maniac, to try and make up spots because they know they’ve only got eight laps to do it and half of that’s probably going to be under Safety Car.”

Woods, who finished runner-up last season, is not absolutely opposed to the double reverse but believes that a typical street circuit is not an appropriate place for the format, nor should the first race of the weekend be one of those reversed.

“I don’t really mind it all that bad, I just think that Adelaide probably wasn’t the place to do it,” he told Speedcafe.com.

“If it was Perth or somewhere like that, I think we would have got all our laps but because it was in a tight, twisty street circuit, it was never going to end well, so I think we learned the hard way.

“I don’t mind the idea of having it halfway through, like Race 2, when everybody’s kind of settled in and you know what to expect, but when you do it first race… and just remember, there were a few new guys as well and there’s a few changes been made to cars and everyone didn’t know what to expect, and I think having it Race 1 was a shocking idea.

“I can see what they did, trying to promote the series and whatever else, close racing and a lot of passing, but I think if they were going to do two reverse grids it would have been better to do Race 2 and Race 3.”