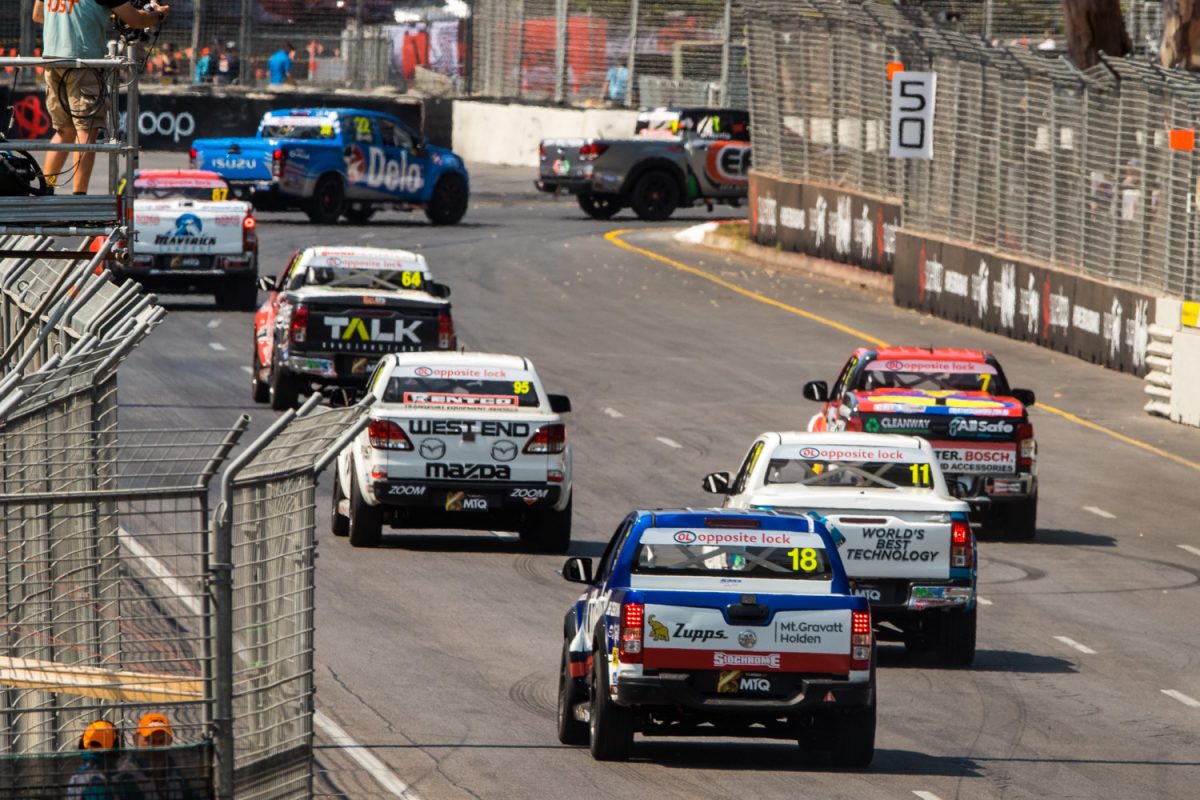 The SuperUtes in Adelaide, with the Team 18 Colorado driven by Dean Canto in the foreground

Supercars has no current plans to change the design of the SuperUtes’ window nets although it is reviewing the crash in Adelaide in which a metal rod brushed Dean Canto’s neck.

Canto was caught up in the first lap incident of a mad Race 1 in which Christopher Formosa’s rolling Ford Ranger fell on top of multiple cars.

The Ranger struck the driver’s side A-pillar of the Team 18 Holden Colorado as Canto drove into the scene of the crash, at the tight exit of Turn 5, while the tray of Ryal Harris’ Mazda BT-50 was also crushed on one side in the carnage.

Scarier still for Canto, however, was that the impact bent the metal rod which the window net hangs from, causing it to come free from its mounting point near the A-pillar and hit him in the neck.

With the net loose and the Perspex windows having already been removed, under orders from the category, due to Adelaide’s searing temperatures, debris from the crash also entered cabin.

While Canto was uninjured, and indeed took to the track for Race 2 on the following day in the same vehicle, he believes that the SuperUtes should take on the window net design which is used in Supercars whereby there is a fastening to the front of the roll cage without the need for the metal rod.

Well here it is! Make sure the sounds on and if you’re game zoom in on the camera that is facing me top right of screen! Footage from @adelaide500 when @formose tried to park on top of me. 🎥: @edge_motorsport . . . #superutes #superloopadl500 #vasc #vboxhd2 #edgemotorsport

“The window net design probably needs to be looked at because it’s just the standard bar at the top with a spring at the back and locates into a slot, so it’s got a big solid bar at the top,” Canto told Speedcafe.com.

“That got hit as the other car went through and bent it so it dislodged and brushed my neck.

“Probably my first thought was that I was quite lucky that it didn’t go bad but they probably need to look at just the whole mesh window net like Supercars run, the FIA one where there’s no solid piece to it, it stretches from the roll cage behind and goes forward to a clipping point.

“It was fortunate that nothing came from it, but if you have a look at how it ended up and sort brushing me, it was like, ‘That could have been worse’.

“I didn’t get injured from it but it wouldn’t have taken much more to wedge it into the side of me if there were another couple of inches or force of impact or whatever.

“Even half of the mirror came flying in because the window net got pushed out of the way, so it’s a design thing. I mean, a freak accident but all the same that probably needs to be looked at.”

Category manager Kurt Sakzewski has advised that Supercars has no specific plans to make any changes to the window net specification, which he pointed out is common to a multitude of categories, although it is reviewing the accident as a matter of course.

“The window net that’s used in the SuperUte is the same that’s put in most, probably a large percentage of race cars running in Australia,” he told Speedcafe.com.

“The incident with Dean, obviously he had a car pretty much land on the roof of his car so that had a fairly major impact on the body shell of that car.

“The important thing is that the roll cage did its job, stayed intact, which is great, but we’ve got our guys reviewing the incident, data, and also the impact it’s had on the car and all that sort of stuff.

“I think having the window net brackets take some of the impact, due to the potential of what could have happened in an incident like that, that’s a pretty minor thing (outcome).

“Obviously the window net’s not designed to catch a car falling on it; the idea of the window net is to stop body parts from escaping out through the window if the car was to roll or something like that.

“The one put in Supercars is a very different mechanism altogether and you can always say you can do different things but that’s the spec that we’ve got in use at the moment and obviously it’s the same spec that is used in quite a lot of cars that we see around the tracks in Australia as well.

“We’re looking at the whole incident of how the ute held up, we do that every time there’s an accident, we have a review of how the actual vehicle holds up and review all the parts of it.

“It’s only been a week, the cars have only (recently) come back to the workshop, so, could there be something in the future? Possibly, but we wouldn’t forecast it at the moment.

“The key thing is that the roll cage did its job and Dean wasn’t impacted by the car itself sort of landing on the roof of his car. I think that just shows the strength of the design that they’ve got there with the roll cage.”

Round 2 of the ECB SuperUtes Series will beheld at the Pirtek Perth SuperNight on May 2-4.