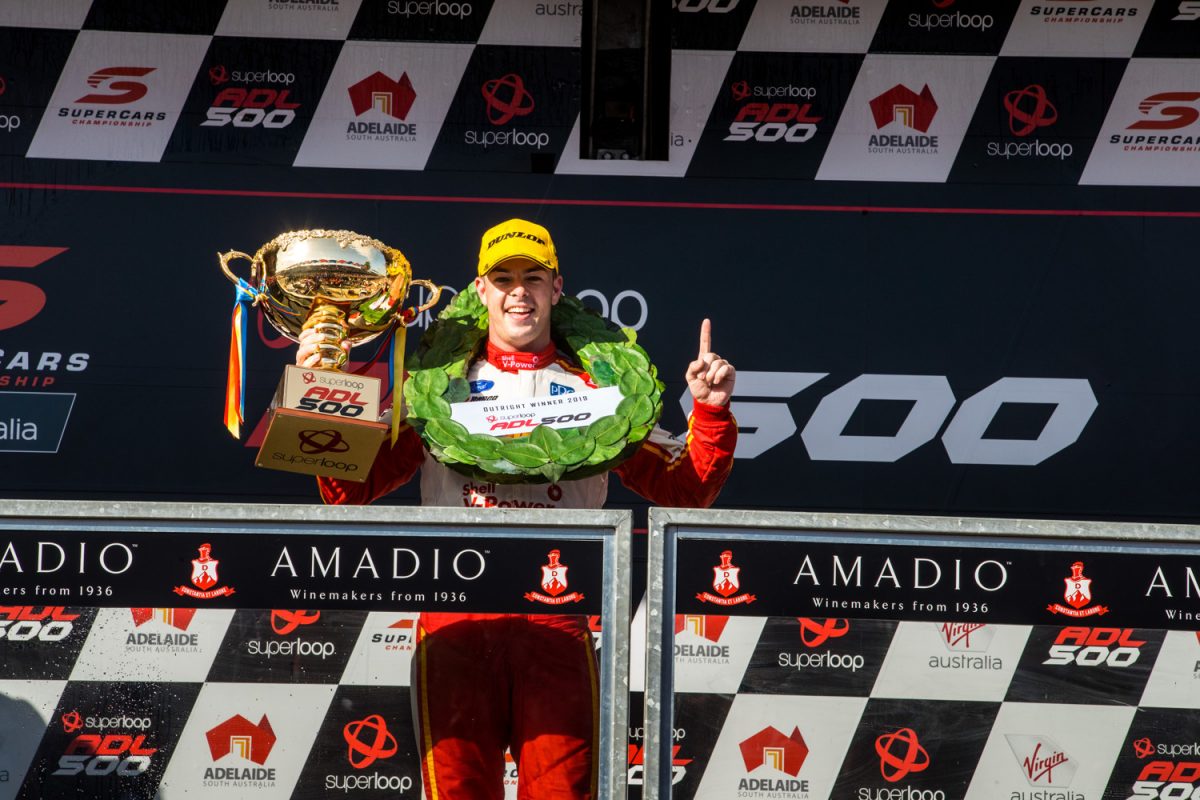 A perfect haul of points coming out of the Superloop Adelaide 500 is an unexpected bonus for Scott McLaughlin who handed the Ford Mustang a dominant debut with two wins in as many starts for the new car.

Shell V-Power Racing commanded the weekend, finishing on top in all but the first practice session, with Fabian Coulthard snaring pole on Saturday, before McLaughlin broke his Adelaide qualifying duck for Sunday’s race, winning both races across the weekend.

It leaves the 2018 Supercars champion with a perfect 300-point score from a weekend in which he says he’d have been happy with top five finishes.

“You always hope, you always believe in your team and believe in what you can do,” McLaughlin said.

“I feel like we punched above our weight last year and I felt like resetting and building a new car was awesome and exactly what we needed.

“I feel like we were also strong on a linear set-up, we ran that type set-up at Newcastle so I was confident that on a street track we’d be there or thereabouts.

“I walked in the weekend and said to Ludo, ’a couple top fives would be great, get the championship onboard’, didn’t really say top two first.

“Obviously 300-point weekend is just a bonus, but we’ve seen Shane (van Gisbergen) do it in the past so just sort of keep our heads down now.

“We had to work for it on Thursday with the issue and then Friday we were working on a few things,” he added.

“I wasn’t exactly quick in qualifying but I felt like today I had the most consistent day pace wise. I had really good qualifying pace and really good race pace. I’m just so stoked.”

McLaughlin was made to work for the result on Sunday afternoon, going door-to-door with van Gisbergen initially before narrowly avoiding a late-race duel with Cam Waters following his final stop.

“I got a pretty good launch and then he got the second phase, I got a bit of wheelspin but I said to him ‘I was just braking where you broke’,” he said.

“If he braked as late as he could then I was deeper, it was a sick battle.”

Having seen off van Gisbergen, a late race threat came from Waters when a faulty wheel gun in his final stop saw McLaughlin’s exit delayed.

The DJR Team Penske driver emerged from pit lane narrowly ahead of the Tickford Mustang, presenting a brief challenge for the race lead.

“I knew that was going to be pretty tight coming out of the pits after we had that mistake just with the nut,” McLaughlin said.

“I was just waiting to see his green lights and they come up pretty quick.

“I was just throwing the block on hard, probably a bit cheeky in areas, I was just trying hard and it was a great battle.”

McLaughlin heads the Supercars Championship after its opening round with a perfect score of 300 points over van Gisbergen in second with 258 and Jamie Whincup third on 234.

The series heads to Albert Park where the Supercars Championship forms part of the undercard for the Formula 1 Rolex Australian Grand Prix.