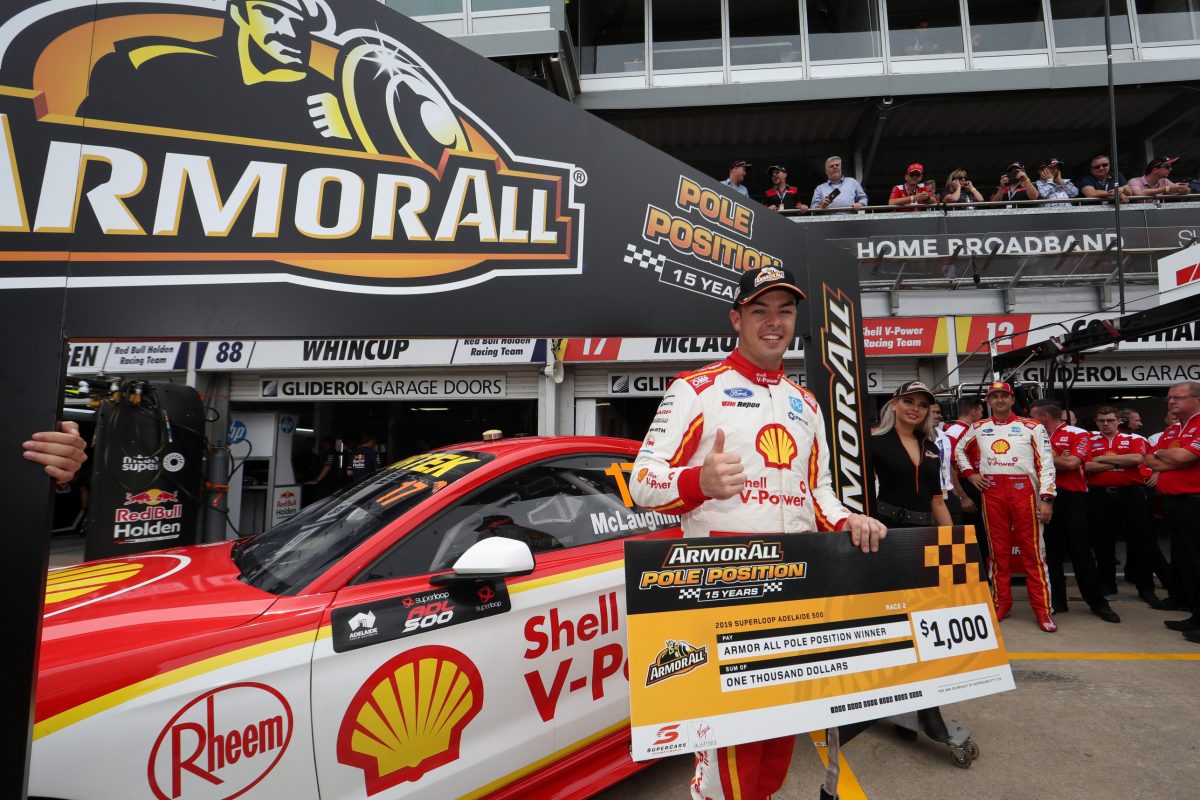 Scott McLaughlin has topped the Armor All Shootout as Shane van Gisbergen went from a provisional 10th on the grid to the front row for Race 2 in Adelaide.

McLaughlin finished up 0.2637s clear of his compatriot but van Gisbergen was arguably the big winner having only made the Top 10 Shootout by 0.0133s right at the death in the morning’s 20-minute qualifying session.

Chaz Mostert swapped positions with van Gisbergen after he cut the Turn 2 kerb in the Supercheap Auto Mustang, while Fabian Coulthard is under investigation in the other Shell V-Power entry after the bonnet was up in pit lane before his lap due to a problem with starting the #12 Mustang.

Coulthard, for the time being will sit directly behind team-mate McLaughlin on the grid, next to David Reynolds.

The result means that each of DJR Team Penske’s drivers has a pole from the 2019 Superloop Adelaide 500.

“Awesome to get Armor All Pole Position. Obviously it’s a big thing to get my first pole here,” said McLaughlin, who set a 1:19.6626s.

“Shane put a pretty good lap down there. I knew I just had to hit my marks and come away with a good spot.

“Yesterday’s lap was average so today I just needed to get a bit better and it worked out really well.”

Van Gisbergen rolled out a 1:19.9263s as the first man on-track in the #97 Red Bull Holden Racing Team ZB Commodore.

Coulthard, who was fifth-fastest in qualifying, shadowed van Gisbergen’s time through most of the lap before coming up 0.1101s short of #97 and therefore 0.3738s away from McLaughlin in the end.

Reynolds opted for a mixture of warm, roaded tyres and green tyres and set a 1:20.1956s in the #9 Penrite Racing ZB Commodore.

Cameron Waters had bettered van Gisbergen to the second sector but drifted to a 1:20.2195s in the #6 Monster Energy Mustang and will share Row 3 with stablemate Will Davison, who clocked a 1:20.3952s in the #23 Milwaukee Mustang.

Nick Percat had a strong second sector but still ended up 0.8812s away from pole in the #8 National Pharmacies ZB Commodore.

Todd Hazelwood moved up a spot from provisional qualifying to eighth in his first ever Top 10 Shootout, in which he got crossed up over Senna Chicane as he ragged the #35 Unit ZB Commodore to a 1:20.7090s.

Anton De Pasquale locked the right-front into Turn 9 and could only put in a 1:20.7508s in the #99 Erebus Motorsport ZB Commodore, dropping from a provisional seventh to ninth.

The second race of the Virgin Australia Supercars Championship, to again be run over 78 laps/250km, starts at 1520 local time/1550 AEDT.