Scott McLaughlin has swept the Superloop Adelaide 500 while Chaz Mostert’s hopes of a decent result were snuffed out by a bizarre pit lane crash.

McLaughlin once again led effectively all the way in the #17 Shell V-Power Mustang, although this time he spent a mid-race portion of the contest behind cars due to a strategy divergence caused by the Safety Car.

Mostert set a new lap record of 1:20.3792s after he was turned into the pit wall as a result of an unsafe release, finishing 15th.

The start was delayed by nearly 25 minutes in order to fix the fitting for the Turn 1 tyre bundle and when it did get underway, McLaughlin and van Gisbergen ran side-by-side from the front row until the exit of Senna Chicane.

The latter had to relent after taking the bumpier route and that was as close as he got during the first stint of the race as McLaughlin gapped the #97 ZB Commodore with ease.

A little further back, the Mustangs of Waters, Will Davison (Milwaukee Racing), Mostert, and Fabian Coulthard (DJR Team Penske), were also picking off those around them with a minimum of trouble.

The former muscled his way past David Reynolds for third at Turn 9 on Lap 1 and would pit after nine laps, a bit over five seconds behind the leader.

It helped him move ahead of van Gisbergen in the pit stop cycle, after the Kiwi took service on Lap 22, at which time he was nearly 10 seconds adrift of McLaughlin.

Only Rick Kelly had not taken his first pit stop when the first Safety Car of the weekend was called on Lap 27 to retrieve the Tekno ZB Commodore of Jack Le Brocq which had stopped at Turn 11.

There was chaos as Kelly pitted and most of the rest of the field, including all the front-runners, followed him in.

Mostert, effectively top five at the time, drove into the fast lane in the path of Kelly, who did not relent and turned Car #55 into the pit wall.

The broadside Mustang and the Castrol Nissan all but blocked the lane and forced the rest to thread their way through the DJR Team Penske and Triple Eight pit bays.

The Supercheap Auto entry was given a drive-through, which in serving saw him follow Kelly back into pit lane and the Altima driver held Mostert up while turning into the Kelly Racing garage as a result of the damage which Car #15 incurred.

Percat and Reynolds ended up at the head of the field having not pitted under Safety Car, from McLaughlin and two more that stayed out in Scott Pye and James Golding.

Coulthard dropped to 21st after he was brought straight back in, presumably to top up, having had to stack behind McLaughlin anyway.

Reynolds took the lead at the end of Wakefield Street when the race restarted on Lap 30 but he and Percat continued to run together at the front and actually gap McLaughlin somewhat.

Race Control subsequently investigated a possible failure by that pair to maintain speed when the Safety Car pulled away, but they were cleared.

Waters was fourth, effectively second, by the time he pitted on Lap 44 and McLaughlin came in a lap later.

They closed up through the terraces on the latter’s out lap but Waters couldn’t fashion a move and slowly fell off the back of Car #17.

However, he still had five seconds in hand when van Gisbergen pitted from the lead which he had inherited, at the end of Lap 56.

While McLaughlin got out to around a five-second lead again, van Gisbergen caught Waters with what would turn out to be five laps remaining as the race ran time-certain.

McLaughlin eased off at the end to win by 2.3854s after 71 completed laps of a scheduled 78, even with time-certainty pushed back from 1718 to 1725 local time (plus one lap), while van Gisbergen didn’t shape for a move on Waters.

“Really excited; took the pony to the field and took on a couple German machinery and it won,” said McLaughlin.

“So, credit to everyone at Shell V-Power Racing, the car was unbelievable.

“The Ford fans all weekend have been all about the Mustang and pumped up about it, so thanks for the support. I just can’t wait to party tonight.

“We came in hoping for two top fives and came away with a 300-point weekend. Just blows me away.”

Andre Heimgartner was the first of the Kelly Racing drivers in 13th in the Plus Fitness Altima while Simona De Silvestro finished 16th despite her Harvey Norman Altima going spinning at the fourth corner of the race.

Coulthard finished down in 20th after incurring a drive-through for spinning Garry Jacobson (Rabble.Club Altima) at Turn 4 while still buried in the field on Lap 52.

Le Brocq did make it back out on track to finish three laps down in 21st and Macauley Jones was classified 23rd at 14 laps off the pace after electrical problems for the CoolDrive ZB Commodore.

Kelly made it a 100 percent finishing rate in 24th, with an academic time penalty for failure to meet the minimum fuel drop.

The next event is the Beaurepaires Melbourne 400 at Albert Park on March 14-17. 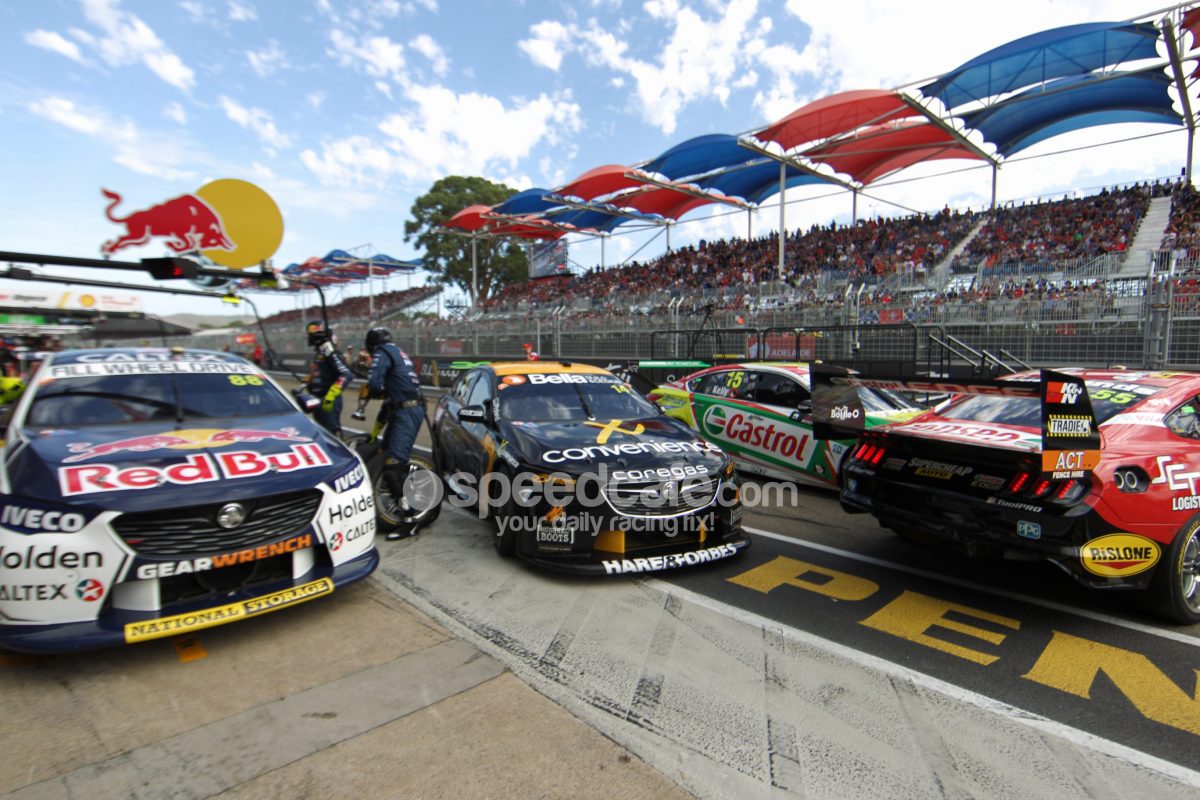