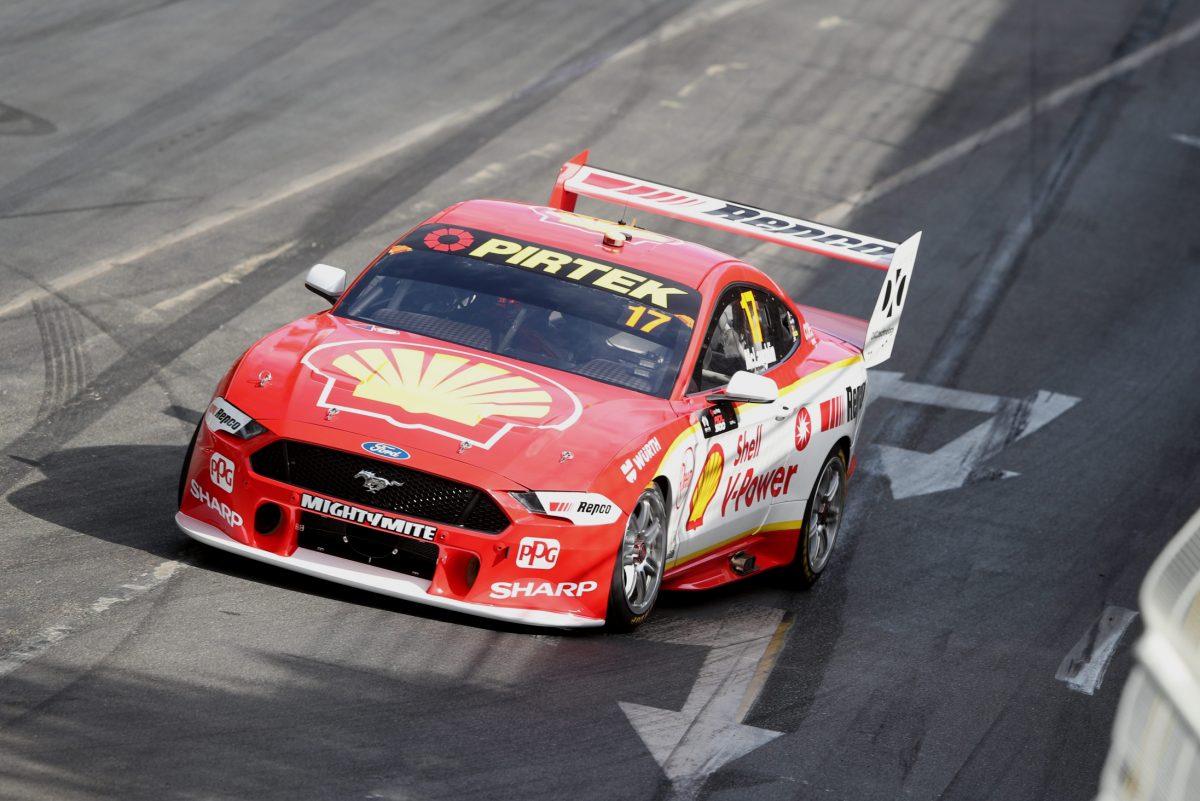 Scott McLaughlin has provisionally qualified on Armor All Pole Position for Race 2 in Adelaide as Jamie Whincup missed the top 10 and Shane van Gisbergen barely made it.

Chaz Mostert, Cameron Waters, and Nick Percat finished within 0.1073s of McLaughlin, while 0.0133s was the difference between van Gisbergen making the Top 10 Shootout or not.

His Red Bull Holden team-mate Whincup, on the other hand, qualified only 12th while Mark Winterbottom did not set a team after power steering problems in the Irwin Racing ZB Commodore.

McLaughlin, Mostert, David Reynolds, and Whincup sat first through fourth with five minutes remaining, with most having opted for single flyer on each of their first two runs but Reynolds doubling up on both occasions.

A slightly off-sequence Waters then jumped from 10th to second in the Monster Energy Mustang, less than a tenth slower than McLaughlin, on his third run, and Anton De Pasquale took up third.

McLaughlin moved the mark from 1:19.7101s to 1:19.4625s in his final run in the #17 Shell V-Power Mustang, which was just enough to stay ahead of Mostert when the Supercheap Auto Mustang crossed the stripe seconds later.

“The guys built a great car. They built a car that’s very similar to the last one I just had, just has a few less stickers on the door,” said McLaiughlin.

“I’m comfortable. I’m still battling a little bit under brakes, I lock the rears a fair bit in that run. I think Whincup and a few others in front of me did as well.

“I think it’s the same issue for everyone but it’s nice to be a little bit cool today.”

Waters found more time to rebound from eighth to third after the chequered flag, putting him ahead of South Australian native Percat (National Pharmacies ZB Commodore).

Reynolds found enough time to finish sixth fastest, one position ahead of the other Penrite Racing ZB Commodore of Anton De Pasquale.

Will Davison made a second Shootout in as many days for Milwaukee Racing in eighth in the #23 Mustang, while 2017 Dunlop Super2 Series winner Todd Hazelwood and his Matt Stone Racing team will start in a Shootout for the first time, in the #35 ZB Commodore.

“That’s awesome the car was just mega then; the Unit Commodore’s just on fire this weekend,” said Hazelwood, another local.

“Made a little tune-up overnight, was fast in the race in the race as well. Great reward for everyone.

“These guys were here at 4am this morning trying to sort out everything. Absolutely stoked, to do this in front of the home crowd is really special.”

Van Gisbergen was off the pace but found enough to put the #97 ZB Commodore 10th, knocking Tim Slade (Freightliner Racing ZB Commodore) out of the one-lap dash at his home track.

Whincup admitted to an error on his best lap which saw him rise only to 12th in his ZB Commodore.

Rick Kelly was fastest Nissan Altima driver in 16th for Castrol Racing while Macauley Jones returned in the repaired CoolDrive ZB Commodore and will start 20th.

That is because of a three-position grid penalty for James Golding, who was 18th fastest in his Boost Mobile ZB Commodore but pinged for impeding James Courtney (Mobil 1 Mega Racing ZB Commodore).

The Armor All Top 10 Shootout which sets the grid for Race 2 of the Virgin Australia Supercars Championship starts at 1245 local time/1315 AEDT.