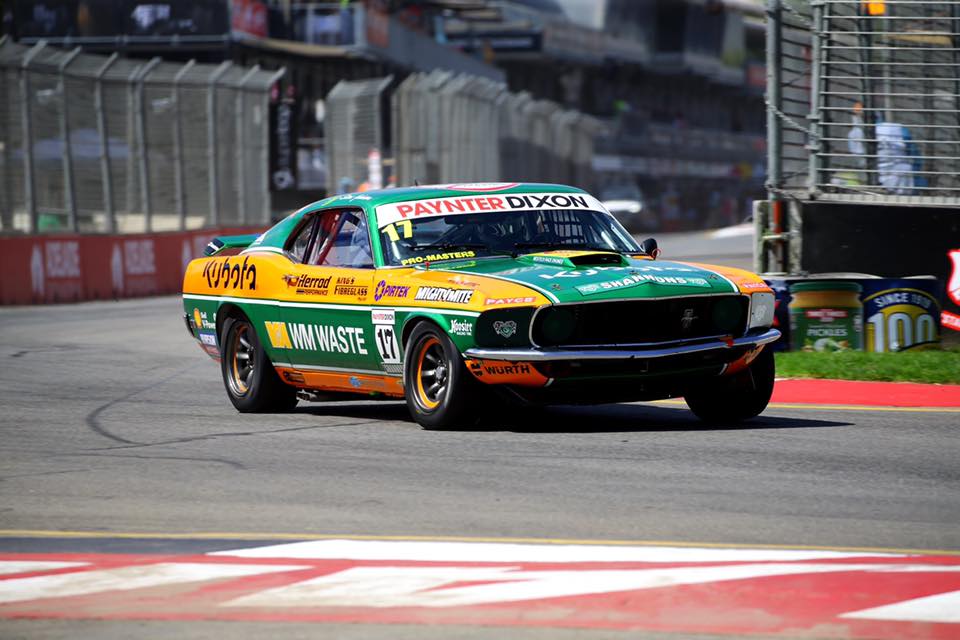 Johnson (Ford Mustang) out-dragged Adam Bressington on the run down to the Senna Chicane, as John Bowe (Holden Torana) slowed to a crawl on Lap 1 while running third.

Slight contact between Ryal Harris (Chevrolet Camaro) and Robert Hackwood (Pontiac Trans Am) sent the latter up the escape road at Turn 4 after a tight squeeze in the braking zone.

Harris then made a move on Jim Pollicina (Holden Torana) for third at the halfway mark of the race.

Johnson crossed the line just over a second ahead of Bressington, while Harris was a further 16 seconds back in third and Pollicina fourth.

There was a frenetic contest going on behind them, including a wild moment for Paul Freestone (Chevrolet Camaro) at Turn 1 when he ran across the gravel and rejoined in front of a five-car train.

Williams finishing sixth having driven up the inside of Freestone at Turn 7.

He was followed through by Bernie Stack but Stack (Chevrolet Camaro) made contact with Freestone and rode over the front left of the car. Kel Treseder beat Justin Ruggier to victory in what developed into an enthralling head-to-head battle in Race 3 of Aussie Racing Cars.

Starting eighth and 10th respectively after the top 10 from Race 2 was reversed, the pair made light work of those who sat in front on the grid.

Treseder, Reece Chapman, and Ruggier passed then-leader Tony Quinn at the end of Wakefield Street on Lap 3, before Ruggier picked off Chapman before the end of the lap.

From there, it was a race in two as they regularly traded fastest sectors and gapped the rest at a great rate.

Ruggier temporarily got ahead when he carried big speed through the Turn 8 Sweeper and dived down the inside at the end of Dequetteville Terrace on Lap 8, but couldn’t pull up and lost the spot on exit.

In the end, it was Treseder by under half a second after 10 laps with Blake Sciberras third from John Anderson and Chapman. Tony Bates claimed victory in the opening round of the Audi Sport R8 LMS Cup season.

Bates, Bhurit Bhirombhakdi and Andrew Haryanto went three-wide on the run down to the Senna Chicane pushing the latter wide over the kerbs as Haryanto and Bhirombhakdi banged doors at Turn 3 once again.

Bhirombhakdi limped back to the pits while Haryanto pulled off the road on the exit of Turn 5 with a puncture.

The chaos let Bates charge off up the road to a four-second advantage over Yasser Shahin in second.

Daniel Bilski made his way past Geoff Emery in the early stages, but Emery eventually closed the gap to a few car lengths.

Emery tried to pass around the outside on Lap 13 but ran deep and lost time to Bilski.

Alexander Au was also setting the timing screens alight but looped the car at the final corner on the following lap.

Emery managed to catch back up to Bilski in the closing stages for a second shot, however, Bilski ran wide at Turn 9 allowing Emery through for third.

Shahin slowed on the last lap, with Bates taking the chequered flag by 13 seconds.

Emery grabbed a close third, followed by Bilski and Au.