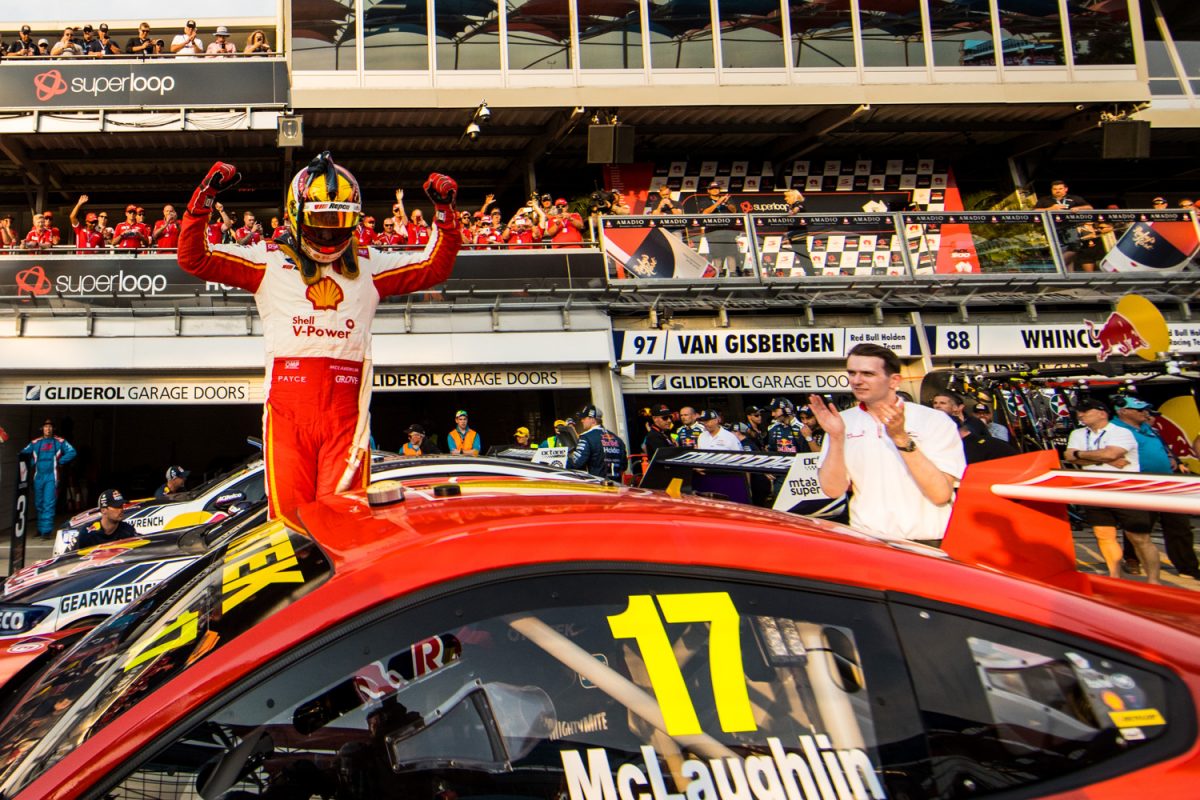 Scott McLaughlin admitted he was ‘stoked’ to claim the Ford Mustang’s first win in the Supercars Championship in front of the top brass for Ford Performance from the United States.

His performance marked the maiden win for the new car, and the first time a Mustang has won in Australian touring car competition for more than three decades.

Alongside its introduction to the Supercars field, Ford has also introduced the Mustang in NASCAR Cup competition where Brad Keselowski claimed its first win for Penske in Atlanta last weekend.

“I said the NASCAR guys took the second week to get it (victory with the Mustang), so I said we’d do it on the first,” McLaughlin jested.

“I just hoped that my words stood up to it and it felt really good to get it today.

“It was my first win here so I was so stoked. The crowd’s just incredible. I was so pumped.”

His victory was set up by a solid start which saw him take the lead at the opening chicane after running three abreast with Fabian Coulthard and Jamie Whincup away from the grid.

McLaughlin and Coulthard, his Shell V-Power Racing team-mate, then controlled the early laps before the latter was issued a 10 second penalty for a jump start.

“I felt like I converted pretty good – I just had to pick middle or left, I went left,” McLaughlin said of his start.

“I was just hoping they didn’t keep trying to go around the outside because I couldn’t really stop too well.”

The 2018 Supercars champ believes without the penalty Coulthard, who recovered to sixth, would have proved a strong contender for the podium places.

“He would probably have taken an alternate strategy to stop double stacking,” McLaughlin suggested.

“I was happy to get track position pretty much straight away. That was sort of my goal.

“I knew that we were a little bit low on (tyre) pressure because that’s how we always roll compared to him, and he was all over me for a couple laps and just sort of stagnated out after that.”

Once informed by the team of Coulthard’s penalty, McLaughlin simply managed the gap to Whincup, ultimately taking the race by just under 13 seconds.

Shane van Gisbergen was third in the second Red Bull Holden Racing Team Commodore, before a trio of Mustangs made for four of the Blue Oval’s six representatives in the top 10.

The second race of the Superloop 500 takes place at 1520 local time, following a 20-minute Armor All Qualifying session and Top 10 Shootout earlier in the day.