Coulthard takes Shell Mustang to pole for Race 1 in Adelaide

Coulthard takes Shell Mustang to pole for Race 1 in Adelaide 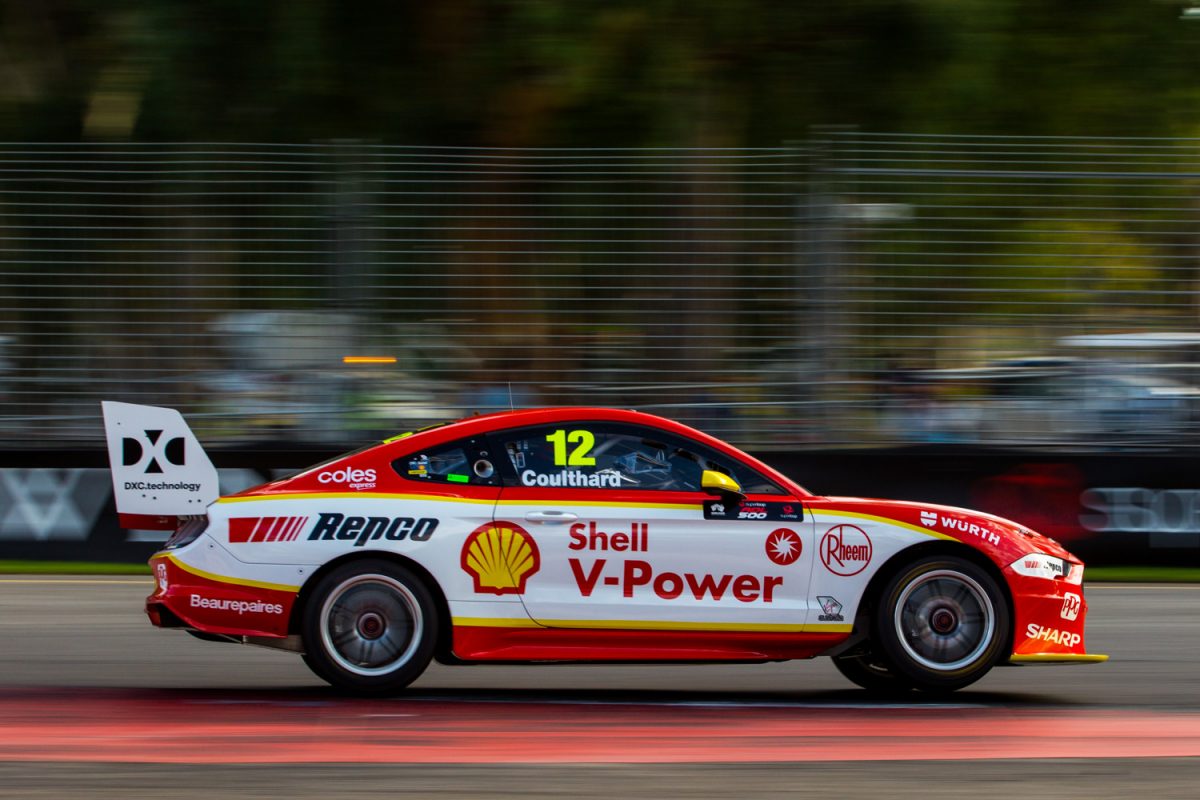 Fabian Coulthard has taken the new Mustang Supercar to Armor All Pole Position at its first time of asking at the Superloop Adelaide 500.

Coulthard set the only ‘19’ of the Top 10 Shootout, leaving the #12 Shell V-Power Racing Team entry more than three tenths up on the field.

Jamie Whincup will start on the outside of Coulthard this afternoon while Scott McLaughlin and Cameron Waters made it three Mustangs on the first two rows.

Coulthard, who provisionally qualified third and did not attempt a Shootout simulation in Practice 4 earlier in the day, blazed to a 1:19.8918s with the fastest first sector and strong pace in the other two.

“It’s been awesome. I can’t thank my guys enough, Shell V-Power Racing, everyone at Ford Performance in America,” he said.

“It’s been a real effort to get these Mustangs on the grid and to get the first pole in a Mustang is pretty special. I can’t thank everyone enough.

“I’ve been confident but this is awesome for my confidence, it’s good to know that we’re on the way back.

“It’s a long way to go until November at Newcastle but we’ll give it a good go.”

Whincup was next on-track and his #88 Red Bull HRT ZB Commodore was nervous into Turns 4 and 7 before he lifted in the final sector, in which he was fastest, to ultimately stay second with a 1:20.2179s.

“Three tenths is a long way in our game so big congrats to Fabian and the Shell crew, they did a good job, had two very fast cars,” he remarked.

“Front row of the grid, we couldn’t be happier with that from where we come from at the test day.”

Provisional pole-sitter McLaughlin all but matched his DJR Team Penske team-mate to the first sector but lost time in the next two and logged a 1:20.2551s.

Waters had a strong first sector and finished the lap well in clocking a 1:20.3402s in the #6 Monster Energy Mustang to improve from fifth to fourth.

Shane van Gisbergen bumped the wall between Turns 6 and 7 in the #97 Red Bull HRT ZB Commodore before digging deep in the final sector to set a 1:20.3883s and pip previous fast man David Reynolds by 0.1247s.

Reynolds had put in a tidy effort which yielded an impressive 1:20.5130s in the #9 Penrite Racing ZB Commodore, taking him from a provisional ninth to sixth.

“My rear roll bar keeps like going softer halfway around the lap so I’m stressing out about it,” he said.

Will Davison was next out after van Gisbergen in the #23 Milwaukee Mustang and was up on the Kiwi to the second sector before slotting in behind Reynolds by less than a hundredth.

Nick Percat dropped from a provisional fourth to eighth, scuffing the #8 National Pharmacies ZB Commodore on the wall at Turn 11 on his way to a 1:20.6132s.

James Courtney was first on-track and rolled out a 1:21.0460s in the #22 Walkinshaw Andretti United ZB Commodore.

Rick Kelly had provisionally qualified eighth but gave up time in the final sector which saw him drop a couple of spots in the #15 Castrol Racing Altima.