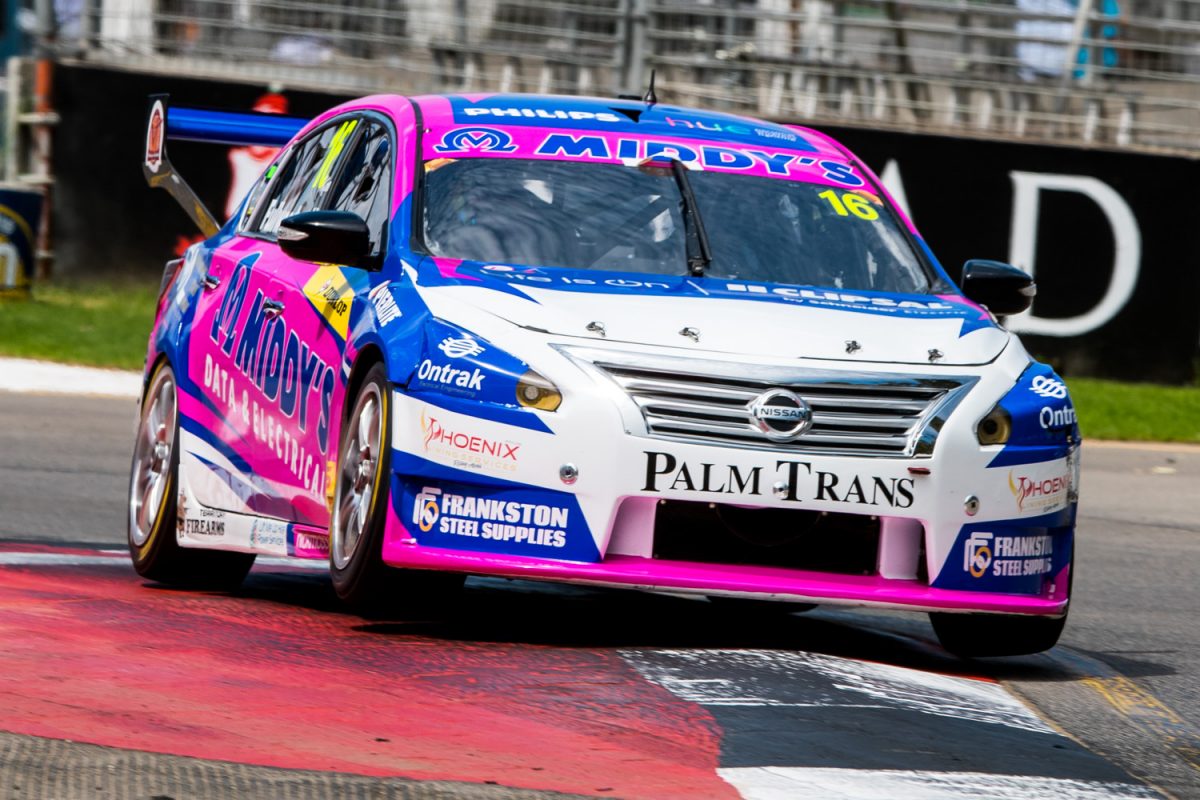 Bryce Fullwood has kept clear of the carnage to take his first Dunlop Super2 Series race win on his return to MW Motorsport.

Fullwood led all the way while Zane Goddard made it an MWM one-two on the streets of Adelaide, with Mason Barbera third having qualified on Armor All Pole Position for the first time earlier in the day.

Several other likely front-runners in the new season came undone early on, with Thomas Randle, Will Brown, and Kurt Kostecki all non-finishers and Dean Fiore a non-starter.

Fullwood beat Barbera off the mark when the lights went out, while Goddard similarly took third position from fellow second row starter Randle.

As the field braked at the end of Wakefield Street for the first time, Kurt Kostecki made nose-to-tail comntact which sent Randle spinning in an incident which will be investigated post-race.

While the Tickford driver managed to keep his FGX Falcon off the walls, his rear wing was ripped off by Goddard’s own Nissan Altima endplate as he careered towards the run-off area.

Kurt Kostecki only got as far as the Turn 8 Sweeper when his Triple Eight VF Commodore failed to turn due to resulting left-front damage, and he clouted the wall.

The Safety Car led the field around for three laps before the remaining 16 cars were let loose again, and Goddard took the opportunity to outbrake Barbera at Turn 9.

Fullwood was soon over two seconds up the road but his lead was erased by a Safety Car called on the next lap when Brown’s Eggleston Motorsport VF Commodore headbutted the concrete wall just beyond the Turn 7 exit.

Brown had been attempting to pass Brodie Kostecki for sixth position but there was still an overlap as they reached the end of the newly positioned wall and Car #38 was turned across the nose of the Kostecki Brothers Racing VF Commodore.

Officials reviewed the incident during the race and determined that no further action would be taken.

The second restart came on Lap 10 and Fullwood gradually pulled away in the #16 Altima, winning by 2.3390s after 13 laps in a time-certain finish.

Goddard was comfortable second position, improving on his previous personal best by four positions in his first start with MWM, while Barbera guided his Garry Rogers Motorsport VF Commodore home to a first-time podium.

Brodie Kostecki picked off Ash Walsh and then cousin and team-mate Jake Kostecki (VF Commodore) after the second restart to finish fourth.

Fifth for Jake Kostecki was also a personal best, while Walsh was sixth after qualifying only 12th in the #35 Matt Sone Racing VF Commodore, having vaulted to fourth on Lap 1.

Abbie Eaton (MSR VF Commodore) circulated at the rear of the pack and finished 14th in her first start in a Supercar after an off-track excursion late in the race at Turn 14.

Jordan Boys was running at the finish but not classified having dropped four laps due to electrical problems in his Image Racing VF Commodore.

Fiore failed to start due to a battery problem in his EMS VF Commodore, and Tyler Everingham’s name did not make the grid sheet after he put his MWM Altima in the wall at Turn 8 in Armor All Qualifying.