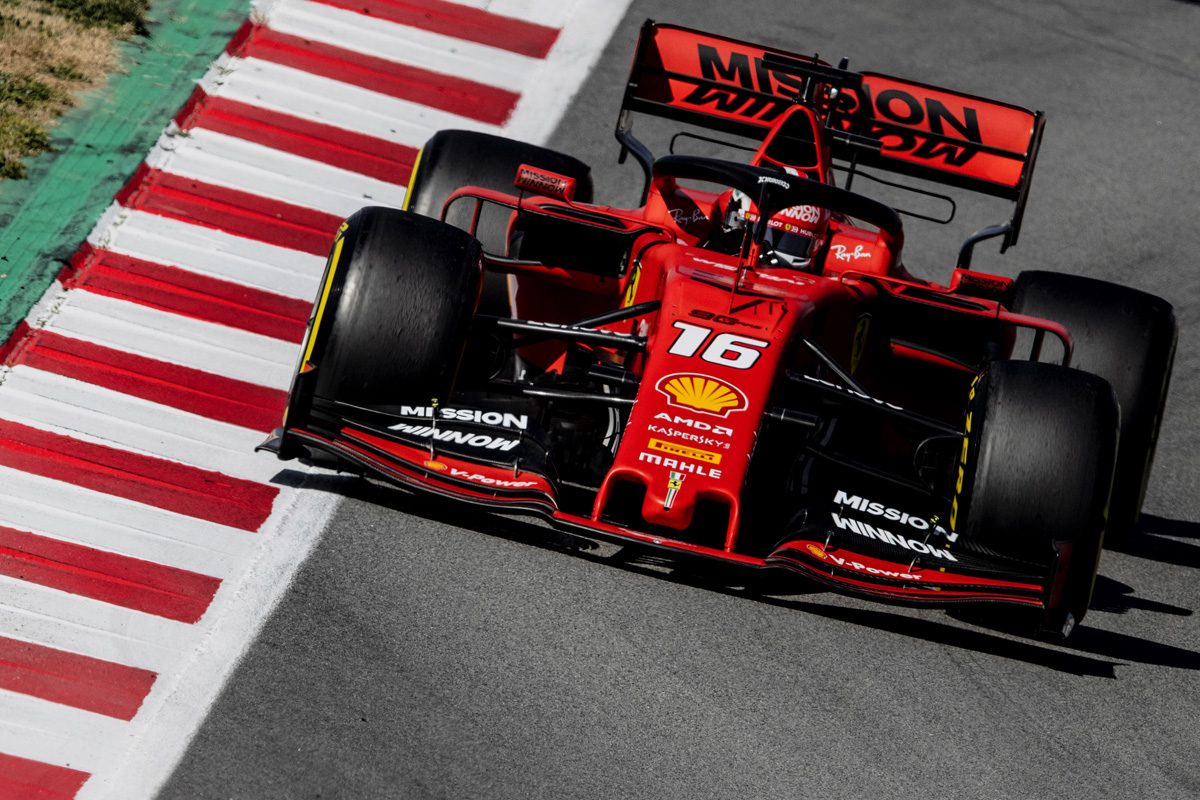 Charles Leclerc put Ferrari on top of a day which saw three red flags and teams begin to finally unleash the full potential of their cars.

Leclerc banked 138 laps over the course of the penultimate day of pre-season testing, ending up more than six tenths clear of second fastest Alexander Albon.

Three red flags, all during the afternoon session, saw the day become somewhat stop-start, triggered by Pierre Gasly dropping a wheel and shunting the Red Bull at Turn 9.

Half an hour later Lance Stroll rolled to a halt at the same corner, before Leclerc then did the same thing.

Ferrari’s performance came on the back of a crash on Wednesday for Sebastian Vettel which saw the Scuderia miss much of the afternoon effecting repairs to the SF90.

“It didn’t look as though today would be easy, given that we had to make up for yesterday’s lost time, but we got it done and that was very positive, especially as this was my last day in the car before Australia,” said Leclerc.

“I am very happy because we worked really well. It’s been an encouraging start to the season and I feel about ready. Now, I can’t wait to take part in my first real grand prix with Ferrari.”

Renault pair Daniel Ricciardo and Nico Hulkenberg were fifth and sixth fastest respectively with Ricciardo completing eight laps less than his team-mate, followed by the Racing Point machine of Stroll.

The Canadian stopped shortly after becoming the first from the Racing Point team to clear the 100 lap mark in testing so far.

Antonio Giovinazzi finished up eighth in the Alfa Romeo with Romain Grosjean ninth for Haas and the Lewis Hamilton Mercedes rounding out the top 10.

Neither of the Mercedes made headlines with Valtteri Bottas the last of the runners in 13th, however, both of the silver arrows did complete long runs; Hamilton ticking off 85 laps for the day and Bottas 97.

“Today has been a good day,” said Hamilton.

“Lots of mileage, which is great for us. It has probably been one of the most positive days for us. We’ve really learned quite a lot.

“We’ve been able to apply our learnings from the morning to the afternoon, so I’m looking forward to seeing how Valtteri felt, but the car looked like it was in a better place.

“Our understanding of the W10 is continuously growing, so it was definitely a positive day.”

George Russell in the Williams, who completed the most laps out of anyone at 140, and Kevin Magnussen in the second Haas filled 11th and 12th respectively.