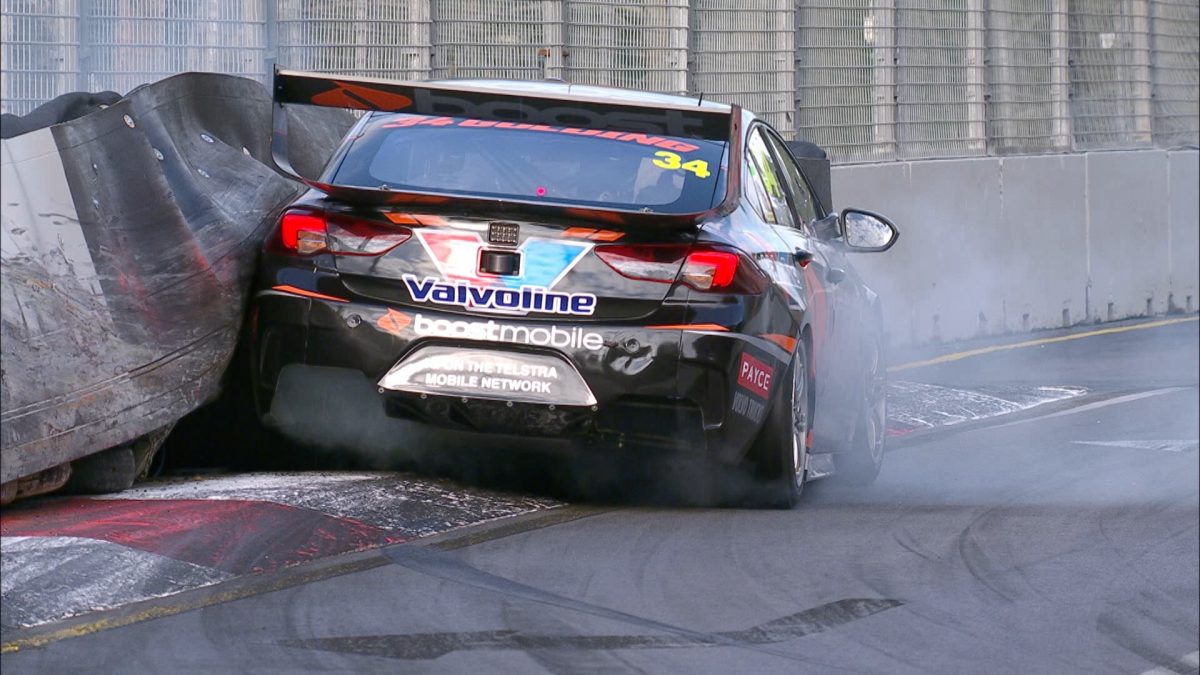 Drivers expect the changes at Turn 7 on the Adelaide Parklands street circuit to cause ‘chaos’ after getting their first taste of the revised layout during practice on Thursday evening.

It proved an interrupted session with multiple red flags, including one for the stricken James Golding whose GRM Commodore became entangled with the conveyor belt covering the tyres on the exit of Turn 7.

“The problem with what we’ve got now, I think the idea was great but I think what it will create is chaos if someone goes in there,” Holdsworth suggested when asked about the changes by Speedcafe.com.

“We saw it in Super2 and even in our session with Golding I think coming out of (Turn) 7, if you hit that wall it sucks you in and spits you back out, or it just stops you dead and someone (who)’s following closely is going to run up your arse and create a concertina.

“On the opening lap everyone generally goes side by side through (Turns) 6 and 7 and that won’t be possible now. The guy on the outside will be in the fence and it’s back into the traffic. I think it’s going to create plenty of dramas.”

It’s a view shared by Coulthard who suggests removing some of the tyres would resolve the issue.

“I don’t think we’ve seen a red flag for that corner before,” Coulthard ventured.

“If the tyres weren’t quite as long I don’t think it’d be as much of a drama. They go down from the exit of (Turn) 7 for quite a way.

“Maybe we could shorten that up a little bit and run up to the wall, I feel like that’s a better solution.”

Like Coulthard, Mark Winterbottom believes the change is a positive, though suggests a tweak is in order.

“There were people last year that really took the mickey out of it by running straight over it (the kerb), so to eliminate the track limits (problem), it’s the best thing to stop you,” Winterbottom told Speedcafe.com.

“It’s no different to Turn 11 or anything like that. I think they’ve done a great job because there’s nothing worse than one bloke doing something and then getting away with it and the other bloke not doing it and getting punished for it.

“A wall’s a wall, you can’t drive through it, so I think it’s fantastic.

“They might need to tune up the belt a little bit on it, to stop it from dragging people in, but I hope it doesn’t change. If people are hitting it, they’re using too much road.”

However Coulthard does not expect the changes to be made this weekend, and instead suggests it’s something for organisers to look into for next year’s event.

“Obviously there’s hoops you need to jump through before you can just go changing a circuit but we can always improve it moving forward for future years,” Coulthard reasoned.

“I think it’d be a longer-term plan than that, but I think what they’ve tried to achieve is good. I think the racing’s better.

“It definitely will create potentially a passing opportunity. It’s created a drive corner now, so you have to drive out of (Turn) 7 where before you could just run out over the kerb and it didn’t really matter.

“I think that aspect, we don’t want to lose that but I think the way the tyres are, how the belt gets rippled, it’s now sort of leaning over more than it was when we started. So I think as the race goes on that’s going to get worse.”

The second Supercars practice session is scheduled for 1140 (local time) on Friday morning with third practice and qualifying to follow later in the day.